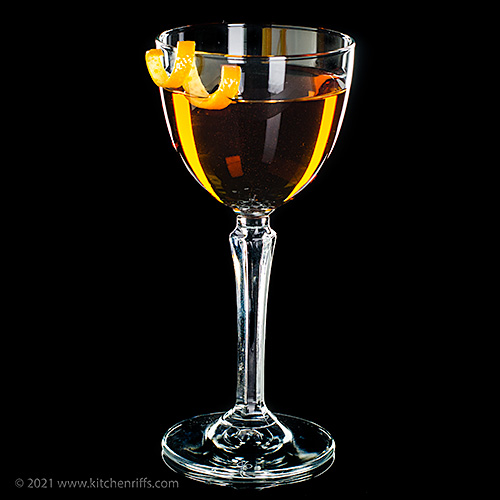 Celebrate the Scottish poet Robert Burns with this namesake cocktail

January 25th is the birthday of Robert Burns, perhaps Scotland’s most beloved poet. During non-COVID times, people throughout the world would gather on or about the 25th to celebrate at a Burns Supper. Much eating and drinking would ensue. Along with toasting.

We won’t be gathering this year. But we can still enjoy our favorite toasting tipple: The Bobby Burns Cocktail is a delightful combo of Scotch whisky and sweet vermouth, seasoned with Bénédictine liqueur.

Care to join us (virtually, of course)? Kilts and bagpipes optional. 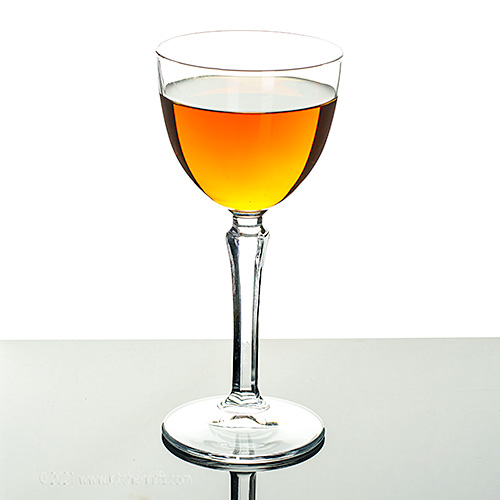 Originally, the Bobby Burns Cocktail was made with equal parts blended Scotch whisky and sweet vermouth, with a wee drop of Bénédictine added. Modern versions of the drink tend toward a 2:1 ratio of Scotch to sweet vermouth, and a bit more Bénédictine. Our recipe reflects this. 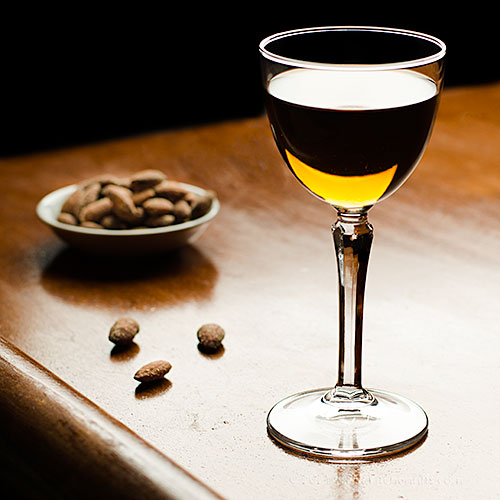 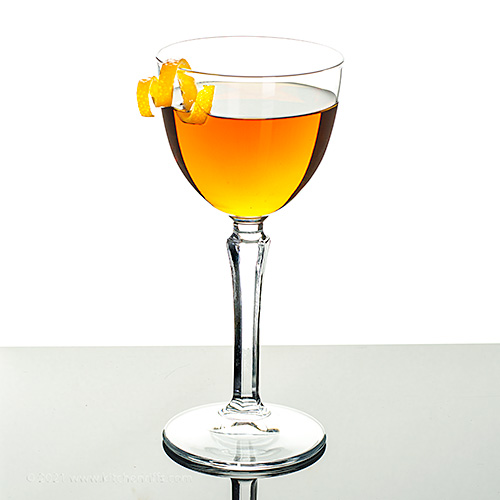 “It is,” I said. “Scotch is really growing on me as a cocktail ingredient.”

“How can they resist a dram of this?” I said

A cocktail with a fascinating origin plus your beautiful photos..perfect!

Hi Angie, it's a great cocktail. Plus we had the fun of reading some of Burns's poetry again. :-) Thanks for the comment.

Hi Debra, yup, that's how you end a Burns Supper. :-) Thanks for the comment, and Happy New Year!

It's a mighty handsome drink!!

Hi Pat and Dahn, tasty, too. :-) Thaznks for the comment.

Very stylish way to escort in 2021! However, we might just skip the side of haggis... LOL. Love the little history behind the drinks, so interesting. Wishing you and Ms. Riff a fabulous 2021!

Hi Bobbi, this does have fun history. :-) Thanks for the comment, and Happy New Year!

Forget about the haggis but I have the drink. Happy New Year to you and yours.

Hi Gerlinde, we'll have to try haggis one of these days. Maybe. :-) Thanks for the comment, and Happy New Year!

Beautiful photos of a very enticing drink. Despite my Scottish heritage on my Mum's side, I have never had a Robbie Burns cocktail. Perhaps this is the year for it on the 25th.I have eaten haggis though in Scotland, and it was pretty good. Thanks for the great story.

Hi Pauline, this is a really good drink! Scotch is becoming a real favorite of ours. :-) Thanks for the comment.

A warm hello to all in the States on a sad day to remember . . . the distances twixt us point out a difference or two again . . . I may not reach for a cocktail glass nut absolutely love to make and eat haggis and black pudding and blood pancakes are firm favourites . . . as is the poetry of Rabbie Burns, the name always used for the guy who changed around a Scottish line or two and gave us 'Auld Lang Syne' . . .

Hi Eha, definitely an historic day here. We need to try haggis one of these days. We're actually supposed to visit Scotland this summer, but not sure COVID will permit that. Haven't read Burns's poetry in years -- had fun getting reacquainted with it. Fun fact that didn't make it into the post: Burns is one of only 4 authors to have a statue honoring him on Literary Walk in NYC's Central Park. Thanks for the comment.

Hi Pam, it's really good stuff. :-) Thanks for the comment.

Now this drink is exactly what I want for my birthday drink tonight!

Hi Ashley, Happy Birthday! :-) And thanks for the comment.

It's amazing how many dishes and cocktails originate at the Waldorf Astoria! I like the story about the cigar salesman, Robert Burns cocktail, but this drink you posted, sounds delicious, love the taste of Scotch whiskey and sweet vermouth. Sip this and read a little Robert Burns poetry, life is good! Happy New Year!

Hi Pam, the Waldorf Astoria was a happening place. :-) Thanks for the comment, and Happy New Year!

Scotch used to be my drink, but I had never heard of this cocktail. I'm sure it's tasty. It sure is pretty.

Hi MJ, there aren't a lot of Scotch whisky cocktails, but this is one of the better ones. :-) Thanks for the comment.

I love reading your cocktail histories. This one looks very elegant and yummy.

For once, John, I actually have all the ingredients for this cocktail. Mark and I have always gone to a Bobby Burns dinner each year to celebrate the poet. I will miss the joy, camaraderie, poetry, and (believe it or not) the haggis. I’m one of the few people who loves the stuff… Oh, and kilts and bagpipes are never optional! I will make this and we will drink a toast to you and Mrs. KR.

We’re all about the cocktail particularly when haggis isn’t one of our favourites. This is such a beautiful shot.
Eva http://kitcheninspirations.wordpress.com/

Hi Amy, we love history, and cocktail history in particular! :-) Thanks for the comment.

Hi David, we've never been to a Burn Dinner -- definitely need to. And haven't had haggis either, although I suspect I might like it (I like weird stuff). Enjoy this -- it's a nice drink. And thanks for the comment.

Hi Eva, we really need to try haggis! Until we can, we'll enjoy this drink. :-) Thanks for the comment.

This is an esecially interesting post, John. I had no idea that witches and warlocks won't cross a running stream. That information could have come in so handy over the years! Still, I have a feeling that, on broom at high enough altitude, they probably can. I also had no idea that Brigadoon - one of my favorite musicals - means "Doon Bridge." I think this weekend, I'll put watch Brigadoon, and whip out the Cutty Sark.

Hi Jeff, we're fonts of useless facts. :-) Although your point about witches, brooms, and altitude probably demands research! Thanks for the comment.

A great cocktail and a marvelous poet!

My parents lived in Scotland for a year and Bill and I were lucky enough to visit them. That's where I learned about Robert Burns. When they got back to the states, the would have the occasional Burns Night party. Before that trip abroad, my dad was not a scotch drinker, but he became a fan. Wish I could serve him one of your cocktails!

Hi Liz, we've always liked scotch (kinda, sorta) but it wasn't our favorite. We're becoming fans, too! This is a terrific drink. :-) Thanks for the comment.

Must be nice to have a cocktail named after you.
Amalia
xo

Hi Amalia, we all need to start writing poetry! :-) Thanks for the comment.

They are not useless! Your posts are entertaining. I love them a lot. :-)

Hi Jeff, thanks -- we enjoy finding out all the stuff that we put in the posts. We actually leave out quite a lot sometimes -- just not enough room. This post in particular could have been three times longer. The history and lore about drinks (and stuff associated with them) is loads of fun. :-)

This drink looks so beautiful John :)

Hi Priya, tastes great, too. :-) Thanks for the comment.

You are the master of all cocktails. What a beautiful presentation! Thanks for the story about the Scottish poet. Intriguing!

Absinthe with Scotch? I'm going to have to try that. I can only take absinthe in small amounts, as it's such a potent taste. Now, I know how to make use of that bottle that's been gathering dust. ;)

Hi Carolyn, absinthe and scotch work! Just use a really small amount of absinthe, though -- maybe 1/8 of a teaspoon, perhaps a little more. Thanks for the comment.

Love the story behind the drink and I will now have to look up the image of the Cutty Sark. Just did and what a story about the figurehead. Thanks for a fun story and a cocktail my husband, the scotch drinker, would probably enjoy.

Hi Fran, haggis doesn't sound that attractive, but I've heard it's good. Maybe one of these days. Or not. :-) Thanks for the comment.

Hi Karen, bet your husband will love this! Really good stuff. :-) Thanks for the comment.

The story makes the drink! No tall tales here!

Hi Abbe, a lot to talk about with this one. :-) Thanks for the comment.

Hi Balvinder, it is. Rather good, too. :-) Thanks for the comment.

Make the kilts obligatory. You might as well. I'll be too tipsy to care, thanks to Mr. Burns. GREG

Another fascinating cocktail! I love whisky single malt or blended, I am all for it

Hi Raymund, scotch is tricky in cocktails, but when it works, it works. And it works in this drink! Thanks for the comment.

I always love to read the history on your cocktails. This one sounds perfect.

Hi Dawn, cocktail history is so interesting! Thanks for the comment.