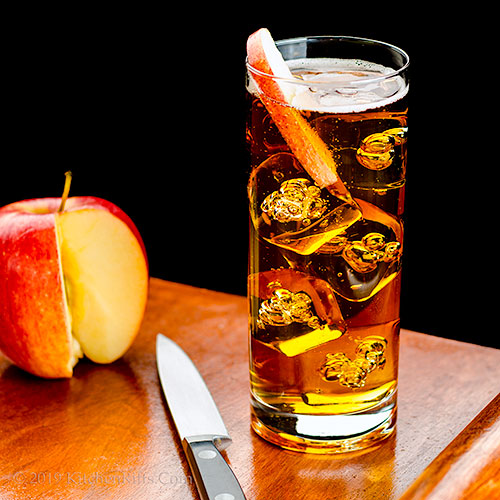 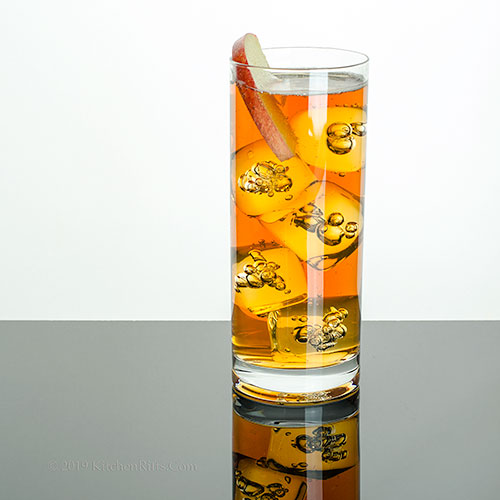 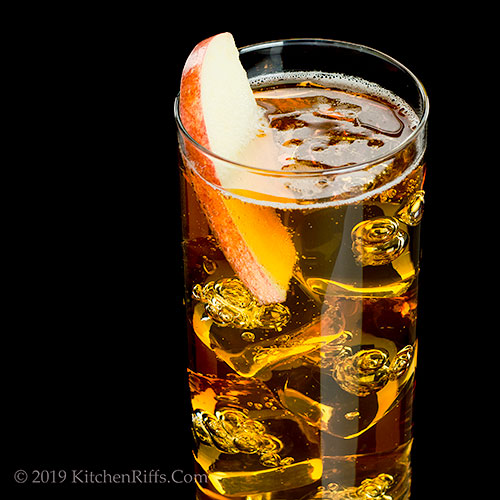 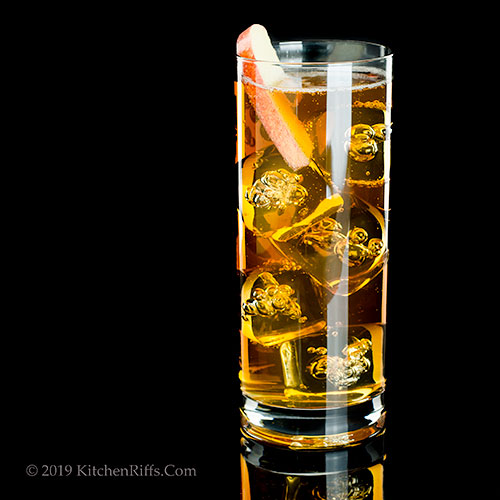 Your photos are always beautiful, but today's are exceptionally wonderful! Nice historic background too.

Hi Mae, we LOVE cocktail history. Well, any kind of history, really. :-) Thanks for that very kind comment.

I love apple cider and rum! What a winner of a drink and I love the bubbles around the ice in your photos.

Hi Amy, this really is a winner of a drink! Wonderful flavor. :-) Thanks for the comment.

The ice cubes look AMAZING in the photos and the drink sounds tasty!

This really looks like a perfect Autumn drink with the fall color and the slice of apple. I bet the cider flavor is fabulous!

Hi Pat and Dahn, hard cider is wonderful -- we've really come to love it (and this drink1). Thanks for the comment.

You are the best photo taker of cocktails. This one is a piece of art! So beautiful!

Hi Denise, aw, thanks for that very kind comment! :-)

The photos are simply amazing. Those ice cubes with little bubbles in them are really cool.

Hi Angie, those are fun ice cubes, aren't they? :-) And a really, really good drink! Thanks for the comment.

I'm not a huge drinker, but I do love rum cocktails. Never paired cider with rum, so I'm going to have to try this.

Hi Laura, rum -- and cider, for that matter -- pair nicely with all sorts of stuff. :-) Thanks for the comment.

Those photos are mesmerizing☺

Hi Natalia, gosh, thanks for that very kind comment! :-)

Love the history lesson here. The drink sounds so delicious but I think I would have to use the soft cider. :) Thanks for the recipe and the history!

Hi Debra, somewhat different flavor with the soft cider, but still really good. :-) Thanks for the comment.

I will try this with gold rum...since it is what I have...looks and sounds amazing John...and so easy...what I like! And I am going 1:3 LOL. Thanks for the recipe.
Have a wonderful rest of the week!

Hi Juliana, this is nice with gold rum! Or dark. :-) Thanks for the comment.

yes lovely photos once again. but i don't think i can drink this one, as rum and I do not agree:-) i used to drink it like a fish but now it makes me ill. weird huh?

Hi Sherry, that is a bit odd. But brandy would be a good substitute. Thanks for the comment.

So very pretty and I love a hard drink with a good history. It's a win/win situation.

Hi Merryn, this one really has fun history. And wonderful flavor. :-) Thanks for the comment.

I'm really glad I didn't live in colonial times. I can't imagine drinking hard cider rather than water! But I can totally get behind drinking one of these before my Thanksgiving feast!

Hi Kelsie, we really like water too! But hard cider has its place. :-) Thanks for the comment.

I love hard cider and this gives me a great excuse to drink rum. I don't need courage, but I do need a new couch. Perhaps we can get Manservant off the stone fence and over to Ethan Allen.

First of all, I think you should create a class to teach us all how to photograph cocktails. Your photos are always so good. And, I like cooking with hard cider, so I'd really like to try this cocktail. And so easy! Pinning.

Hi Lea Ann, I've kind of thought about having a post desriving how to photograph cocktails against black and white backgrounds. Maybe one of these days! :-) And hard cider is delish, isn't it? Thanks for the comment.

John, the drink sounds delish, and I always enjoy a bit of history. But most of all, I am reminded once again that you are the master of drinks photography!

Hi Jean, cocktail history is fun! And this is fun to drink. :-) Thanks for your kind comment!

Wow, the light reflecting off the ice cubes is fabulous!! What a great autumnal cocktail, John!

Hi Liz, light is fun! As is this drink. :-) Thanks for the comment.

John, what a great post and a fantastic drink with a wonderfully rich history. Hard cider is huge over this way. Go to any local pub and they will have more than one on tap and go to the government liquor store and they have a whole aisle dedicated to hard cider. So, this drink will be a hit at our upcoming "American in Sweden Thanksgiving party" this year.

John - it is so nice to learn some history about my ancestor Ethan Allen! And I would love to have a Stone Fence! I always have to say again - because it is so worth repeating - your photos are beyond stunning!

Hi David, Ethan Allen is your ancestor? Cool! Have one of these and go out and raise . . . Cain. :-) Thanks for that kind comment!

Sounds delicious for this time of year.

Hi Akasha, it is! We had it again last night. :-) Thanks for the comment.

Love the history here, which is all info I didn't know. The cocktail is beautiful -- your drink photographs are over-the-top impressive. Always.

Hi Valentina, isn't the history fun? Good, drink, too. And thanks for the kind comment.

Love reading about the history of the drinks. We love the dark and stormy cocktail, so I know this one would be right up our alley. Those ice cubes are mesmerizing. Are you into making your own clear ice cubes or what is your process?

Hi Bobbi, this has become our cold weather refresher of choice; the Dark 'n Stormy is our warm weather one. :-) Those are acrylic ice cubes -- they look good and don't float, so they're wonderful for cocktail photography. We got the cheap ones you can get on Amazon. Real cocktail photographers tend to buy the really expensive ones ($10/each) because they do look better (you can get them at the Set Shop, among other places, if you're interested). These are fine for what we do, though, and MUCH less expensive. Thanks for the comment.

Anything with the intense taste of apple at this time of year is A-OK in my book. It's a sip worth savoring for sure.

Hi Carolyn, we're apple-mad at the moment. Love fall! :-) Thanks for the comment.

This does sound delicious and perfectly autumnal. I agree with you, it probably would make a great pre-Thanksgiving drink. Its ingredients are are so simple, I've got to try it.

Hi Jeff, try this once, you'll try it again. And again. :-) Thanks for the comment.

Probably in the same evening!

The photo is beautiful. Sounds like a great cocktail for the fall.

Hi Dawn, it's a great fall drink! :-) Thanks for the comment.

I love picking a good cocktail for Thanksgiving, and this is perfect! I also love rum.
Your ice cubes looks amazing in the photos. Wish I had such pretty cubes!

Hi Lisa, rum has become maybe our favorite spirit for cocktails, and it plays wonderfully well with cider. :-) Thanks for the comment.