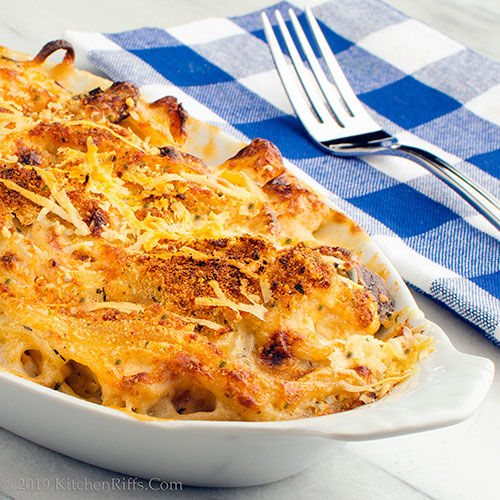 This baked pasta favorite will liven up your leftovers

It’s November, so there may be turkey in your future. Which means turkey leftovers. Give them a home in this traditional pasta dish and no one will complain about eating remakes.

And you don’t need to stop with turkey. Tetrazzini works with chicken too. Not to mention seafood and ham.

You may even want to save some leftovers and make this dish for dinner guests. That’s our favorite kind of recycling. 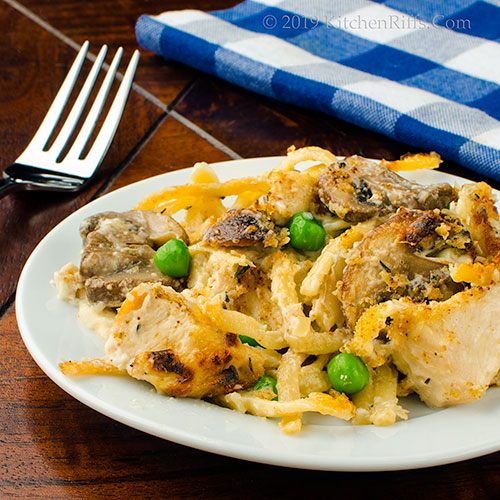 Tetrazzini dates back to around 1908. There’s some controversy about its origin (see Notes), but the dish is widely credited to chef Ernest Arbogast, who worked at the Palace Hotel in San Francisco. It was named in honor of an Italian opera diva, coloratura soprano Luisa Tetrazzini, who was living at the hotel around that time.

There is no agreed upon “authentic” recipe for Tetrazzini, at least as far as we know – it’s a dish that has evolved over time. More about recipe variations in the Notes.

There are several steps involved in making this dish: Cut up leftover chicken or turkey. Sauté mushrooms and onions. Cook pasta. Make a Mornay sauce (this is basically a white sauce – béchamel – with cheese added. BTW, we give only barebones instructions for making it here. For more detailed step-by-step guidance, see our post on Old-School Macaroni and Cheese.) Once all the ingredients are ready, you’ll mix them together and pour them into a casserole dish, then top everything with breadcrumbs and more cheese. Bake until the casserole is hot and bubbling.

Prep time for this dish (which includes making the sauce) is about 30 minutes. Add another 5 minutes for assembling the dish, plus 25 to 35 minutes for baking it. BTW, you can prep and assemble Tetrazzini a couple of hours ahead, then pop it into the oven shortly before you want to serve it (just cover it with shrink wrap and refrigerate until you’re ready to heat it).

This recipe makes enough to fill a 3- to 4-quart casserole dish. Or you can divide the Tetrazzini among several individual casserole dishes (as we’ve done in some of the pictures). Leftovers keep for a few days if refrigerated in an airtight container. 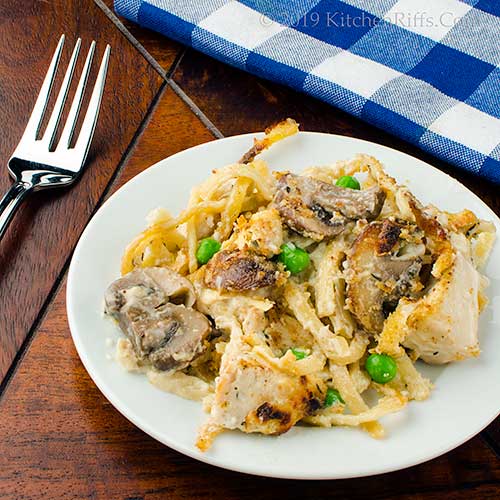 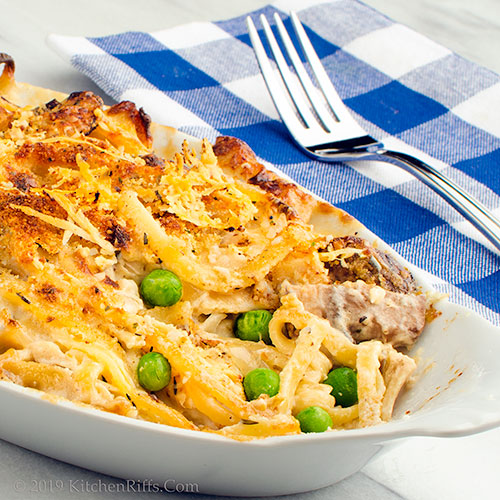 “I hear she was quite the diva,” I said. “Not to mention quite the pasta scarfer.”

“Yes, she once sang on a street corner in San Francisco as a publicity stunt,” said Mrs K R. “Wearing a gorgeous white gown, of course. And only after having a stage platform erected. Plus giving lots of advance warning so her adoring fans had time to show up.”

“I’d expect nothing less of a vocal goddess,” I said. “That’s operatude.”