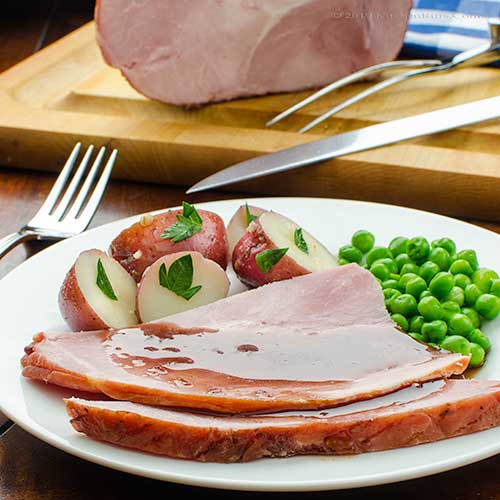 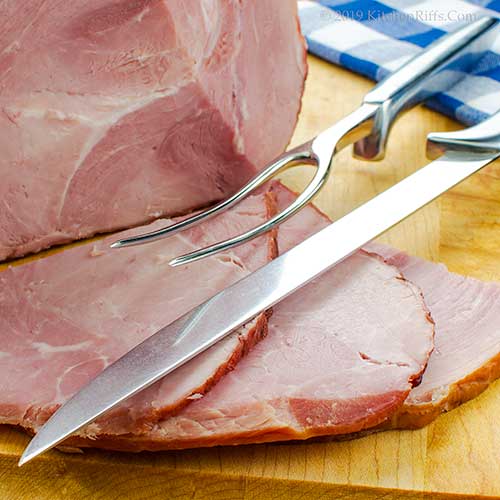 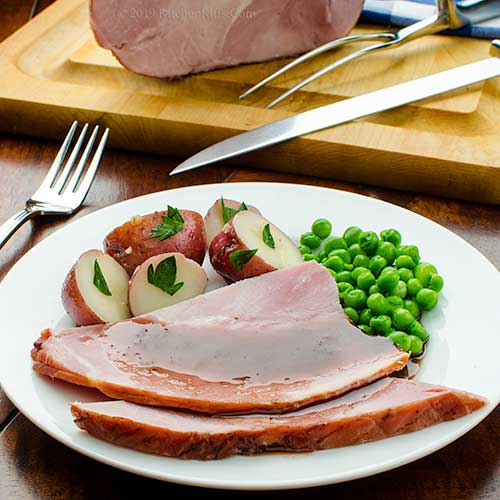 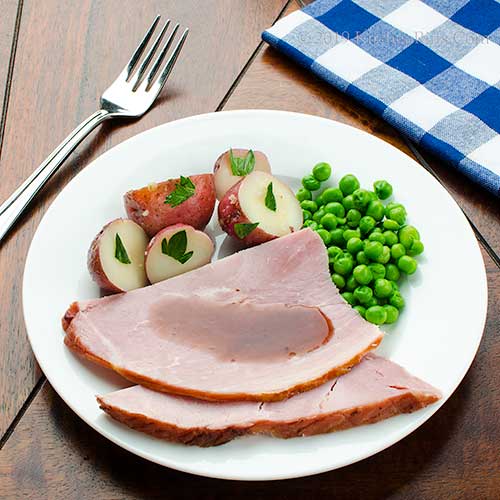 Hi John, Perfect timing for ideas for Easter Supper. We have never used wine before in the mix but I am sure this makes the most delicious glaze for serving. Simply delicious. Wishing you a super week!

Hi Bobbi, this dish has super flavor! And like the little sauce that the cooked-down braising liquid makes. :-) Thanks for the comment.

Great recipe, John! I love a good ham dinner and this looks delicious. The glaze sounds wonderful, thanks for sharing. 😊

What a great idea! I always have ham with honey butter but this looks amazing.

Oh that sounds divine braised with pork. I am not a ham fan but I did a bone-in for a party and that was amazing. My choice cut.

I love port but would have never thought to serve it with ham. What a delicious recipe John - thanks for sharing!

Just in time for Easter! I love that you used Thyme!

We haven't made a ham in far too long, and braising sounds like a great way to go. Thanks for the recipe and the tips, John!

I have some leftover Madeira after making a cake - I wasn't sure what to do with it but now I know! This braised ham sounds fantastic - gosh, with this I don't think I'd even need a whole lot of sides! Thanks John!

This sounds great for Easter, John! We just bought a Heavenly Ham, wish I would've seen this post first. But I want to try this next time, sounds delicious with that sauce. Those potatoes and peas look pretty good too, a meal fit for a king!!! Thanks for recipe!

Hi Pat, that port sauce is delilsh! :-) Thanks for the comment.

Hi Pam, honey butter sounds amazing too! :-) Thanks for the comment.

Hi Evelyne, we go 50/50 between bone-in and boneless. Depends how fancy we want our carving job to be. :-) Thanks for the comment.

Hi Tricia, port and ham is a wonderful combo! Really good stuff. :-) Thanks for the comment.

Hi Ashley, thyme is one of our favorite herbs. :-) Thanks for the comment.

Hi Terry, we don't do many hams either -- a LOT of meat for just two of us. So we always serve it to company. :-) Thanks for the comment.

Hi Shashi, now you do indeed know what you'll be using that Madeira for. :-) Thanks for the comment.

Hi Pam, peas (and potatoes!) are SO nice with ham, aren't they? :-) Thanks for the comment.

This is so perfect for Easter lunch! The ham is perfectly prepared and looks amazing! Mrs. Kitchen Riffs is really lucky!

Hi Angie, it IS amazing! Wonderful flavor. :-) Thanks for the comment.

I have never thought is baking ham with wine, and I am loving the idea of it...I can only imagine how tasty it must be...thank you so much for the idea as we are getting ready for Easter ham. I hope you are having a fabulous week John!

What a fantastic Idea and definitely perfect for a family feast over the Easter break. The port would offer a great depth of flavour, just lovely John.

Hi Juliana, this is such a fun way to cook ham! Bet you'll like it. :-) Thanks for the comment.

Hi Merryn, port is good stuff, huh? Perfect as a braising medium for ham! Thanks for the comment.

Always have port in the house: in my case, prefer the tawny ! Have not baked a ham thus for a long time but have a few planned crowds in the offing who might enjoy! Shall take your methodology into the kitchen and peruse . . .fun trying . . .

The ham is definitely the centerpiece of that dinner plate! None of this nonsense about mostly vegetables... serious meat.

Hi Eha, tawny port is wonderful for drinking, but I think ruby port is the better cooking port. But is there ANY port that is bad for cooking? :-) Thanks for the comment.

John, I am going to have to give you points for this one. I haven't seen a ham recipe like this. I happen to have port on hand too. It has to
be yummy. Definitely not Grandma's ham!!!

Hi Carol, braised ham isn't nearly as popular as baked. Too bad, because we find its flavor better. Must be the port. :-) Thanks for the comment.

Looks so moist and decious, perfect for Easter ☺

Your port sauce sounds incredible! This is no ordinary Easter ham!!! And braising is a marvelous idea---the results look moist and tender.

I've always have port in the house, but have never used any with ham. What a fabulous idea. Madeira as well. A big step up from using coca cola. I know Nigella does it, but it's something I can't bring myself to try! Thanks for this recipe.

Hi Natalia, it's a great Easter dinner! :-) Thanks for the comment.

Hi Liz, the braising liquid makes such a terrific sauce! Super flavor. :-) Thanks for the comment.

Hi Mimi, I've not used cola with ham -- does sounds interesting. Kinda. :-) Thanks for the comment.

Great recipe John. We commonly prepare ham in two different way over this way, boiled or baked. Your braising method blends the two so I say why not. So, with ham in hand, I shall proceed to the stove and braise my hamdsome bounty of pork.

Hi Ron, you're in for a treat when you make this. :-) Thanks for the comment.

This sounds delicious, and just in time for Easter (Unless I decide to stuff a boneless lamb leg but it is much to early for me to make a food commitment))
I am not sure if I enjoy your recipes and how to's or the puns more!

I've never made a ham before. I grew up in a kosher home and while I love ham I've just never made it. Bacon on the other hand is a different story.

I personally don't keep a kosher home and love the sound of your Ham with Port. I think I'll have to give it a try.

Hi Vicki, this really is worth trying. Just think of it as bacon. :-) And yes, changed to a different comment template. Google has been eating comments lately, and I'm hoping this comment template will work better (although I don't like the looks of it nearly as much as the previous template). Thanks for the comment.

Hi Anne, hard to beat lamb! Although ham gives it a run for the money. And although we do the blog for the recipes, it's the puns that we personally find the most entertaining. :-) Thanks for the comment.

I grew up eating ham at Easter but never had it served with such a delicious sauce.

I always went with a simple and traditional mustard or brown sugar or maybe apricot preserve style ham, but port sounds delightful with the fruity notes and robust flavor.

Hi Laura, the traditional way is good, but sometimes a change is nice. :-) Thanks for the comment.

John, that's a beautiful plate of food. Tell me about your carving set. Your carving knife handle looks like the handle of my steak knives I've had forever.

Hi Jean, that was my parents' carving set -- don't know where they got it. And yes, this definitely is a beautiful plate of food! Thanks for the comment.

Well THIS totally screams EASTER!!! And looks to be a total crowd pleaser too!! I am not surprised though, after all, YOU made ;) What I really want to know is what you do with the leftovers if you do in fact have any! Sandwiches perhaps?

Hi GiGi, sandwiches are good, but we have a post featuring leftovers coming in a week or two. :-) Thanks for the comment.

Perfectly timed for the season. This will make lots of people very happy. GREG

Looks so good, John! Makes me wonder why we don’t cook ham all that often! I can imagine that port sauce in several other things!

Hi Greg, we aim to please. :-) Thanks for the comment.

Hi David, ham is good, isn't it? Only downside is they are so large, the leftovers last a long time. Or maybe that isn't a downside! :-) Thanks for the comment.

I love cooking with port wine and I've never braised a ham. This is a must-try for me, and perfect for this time of year. Thank you! :-)

Hi Valentina, braised ham isn't nearly as popular as it deserves to be. A neat way to cook it. :-) Thanks for the comment.

Oooh, now this is an Easter feast taken up a notch -- just the way I like it. Hope you have a wonderful holiday!

Hi Carolyn, isn't this a fun dish! Love braised things! :-) Thanks for the comment.

Port adds so much flavor to cooking. This recipe really amps up the flavor of a good ham, the leftover must be fabulous!

Hi Deb, the leftovers were terrific! :-) Thanks for the comment.

Hi Sonia, we'll keep on keeping on. :-) Thanks for the comment.

I have never made a ham, probably because I never grew up with ham in the house. Now my parents love honey baked ham but I must admit I have never liked the texture of ham. Maybe it is because I've only had wet cured ham from the deli and the texture turned me off. I don't mind it cooked and in things but I'm just not a ham person. HOWEVER, I have no doubt that your preparation would change my mind!

I love braised ham! It comes out so much more juicy than a dry roast... Yum!

Hi Abbe, you might like trying a dry-cured ham. Much better flavor, but it's more of a pain to prepare (that soaking before you cook it). Thanks for the comment.

Hi Frank, we don't braise ham nearly as often as we should! Such good stuff. :-) Thanks for the comment.

Braising in ruby port!!! That sounds awesome! I've made marinades with ruby ports but have never tried braising. I bet the sweetness of the port and the salted of the ham create a wonderful flavor. A wonderful dish for the Easter table.

Hi MJ, this is a totally awesome dish. Totally. :-) Thanks for the comment.

My family here in Germany would love your ham. Braising it in ruby port sounds so good .

Hi Gerlinde, hope you're having a wonderful visit in Germany! Thanks for the comment.