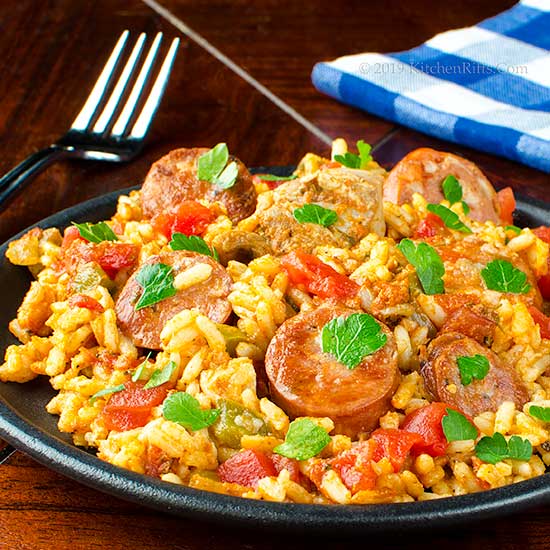 You can feed a crowd with this spicy Creole dish

Mardi Gras may be over, but that’s no reason to ignore New Orleans-style cuisine. It’s good any time of the year!

So today we’re cooking jambalaya, which is pretty much every-day fare in Louisiana. And why not? It’s a one-pot dinner with outstanding flavor.

Best of all, jambalaya is not hard to make. Most of the cooking is unattended, and you can prepare it ahead of time. That makes for a perfect company dish. 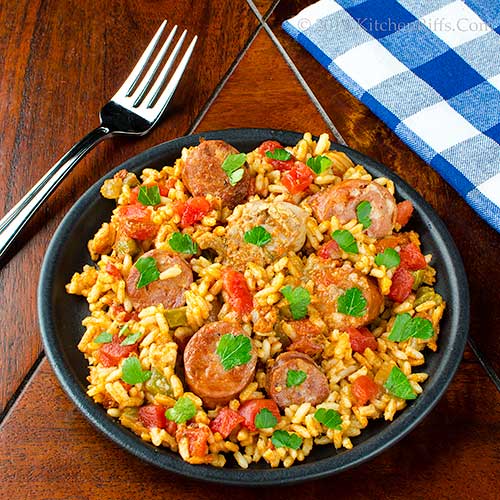 Jambalaya generally includes spicy sausage (particularly andouille), but you can use just about any protein you favor. We like to include chicken, though shrimp or crawfish are also common additions.

In truth, however, jambalaya is all about the rice. That makes it similar to Spanish paella (some people think the dish was influenced by Spanish settlers in Louisiana).

Why do we call this dish Creole rather than Cajun? Well, Creole recipes often use tomatoes as an ingredient, while Cajun ones almost never do (see Notes for more distinctions between the two). So a Creole jambalaya is “red,” whereas the Cajun version is “brown.” We love tomatoes, so our jambalaya is decidedly red.

This recipe (like many Creole and Cajun dishes) uses the “trinity” of onion, green bell pepper, and celery. Precise measurements aren’t important, but you want a ratio of about 2:1:1 of onion to bell pepper to celery.

Prep time for this dish is 20 to 30 minutes (including browning the meat). Cooking time adds 45 minutes to an hour. You can cook this dish an hour or two ahead, then keep it warm in a low-heat oven (see Notes).

Leftovers keep for a few days if refrigerated in an airtight container. Or you can use the leftovers to make soup (see Notes). 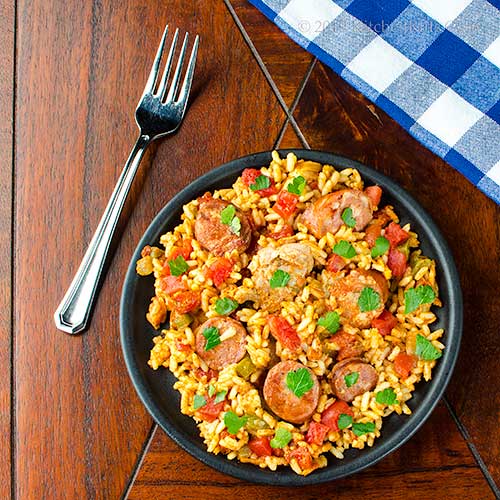 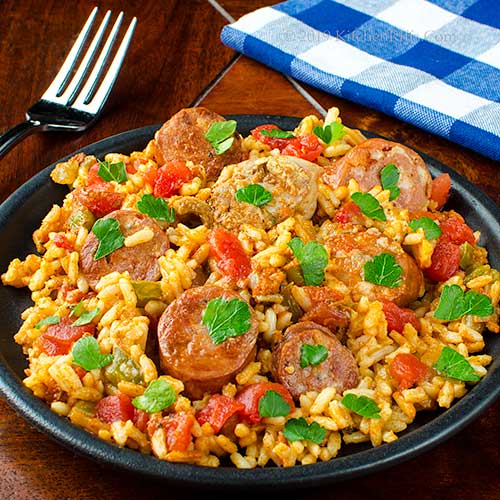 Son of a Gun

“Yup,” I said. “Makes me want to pole that pirogue down the bayou.”

“No need to get all Creole about it,” I said.

You may also enjoy reading about:
Shrimp Creole
Chicken and Andouille Gumbo
Red Beans and Rice
Red Beans and Rice Soup
New Orleans Barbecue Shrimp
Or check out the index for more
Posted by Kitchen Riffs at 9:00 AM