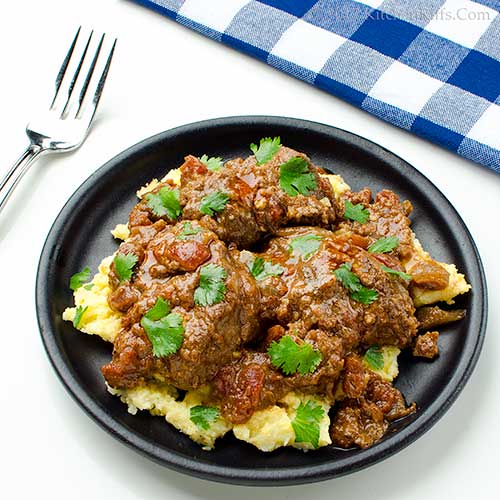 The weather is getting chillier here, so we’re starting to crave stews and braises, preferably ones with some snap. Which leads us to Rogan Josh (aka Roghan Josh or Roghan Ghosht). Who can resist meaty chunks in a rich sauce perfumed with aromatic spices?

This dish is loaded with flavor, but it’s not spicy hot, so it appeals to almost everyone. And it’s as easy to make as beef stew.

So serve this at your next dinner party. And introduce your guests to a whole new world of comfort food. 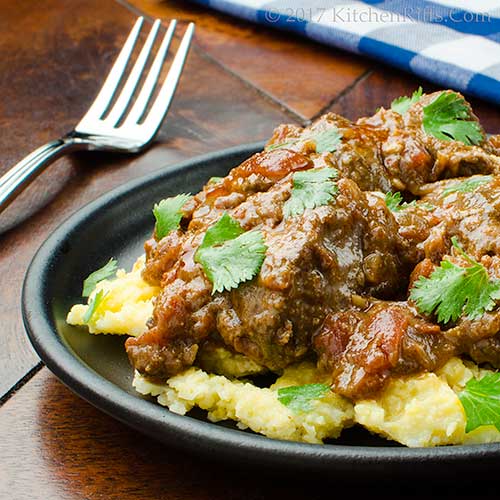 Rogan Josh may be the signature dish of Kashmir, in the northernmost region of India. Because Kashmir stands at the crossroads of Asia, it’s had many political masters over the centuries. Beginning in the 16th century, the area was ruled by the Mughals, who introduced Rogan Josh.

Lamb (or goat) is traditional in this dish, but you can substitute beef if you like (see Notes). Indeed, this dish has spawned countless different recipes and variations. Some versions use onions and garlic, while others avoid them. Some include tomatoes, others don’t. And so on.

But what’s common to all versions is meat that’s braised in a sauce flavored with hearty spices, including dried red chilies and paprika.

You can serve this dish with an Indian bread or rice – such as our Aromatic Yellow Rice. Even better, serve it over a bed of mashed potatoes or Easy No-Stir Oven Polenta.

Our version of Rogan Josh is adapted from Madhur Jaffrey’s Indian Cooking. That book is long out of print, alas (it was originally written to accompany a BBC program of the same name).

Prep time for this dish (including browning the meat) is about 30 minutes. Cooking time is roughly an hour. If you wish, you can prepare this dish a day ahead. Just complete the cooking through Step 8, then cool and refrigerate the dish overnight. Warm and serve the next day.

This dish yields 6 hearty servings. Leftovers will keep for several days if refrigerated in an airtight container. 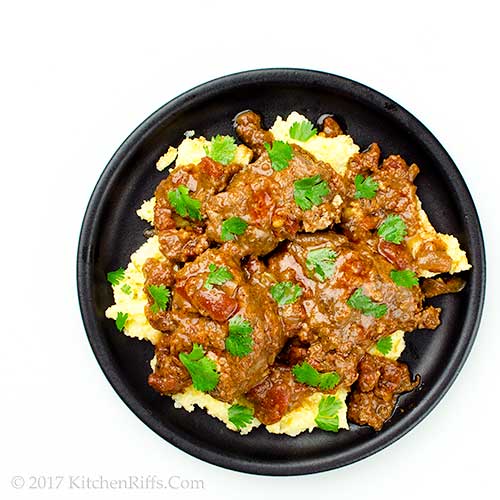 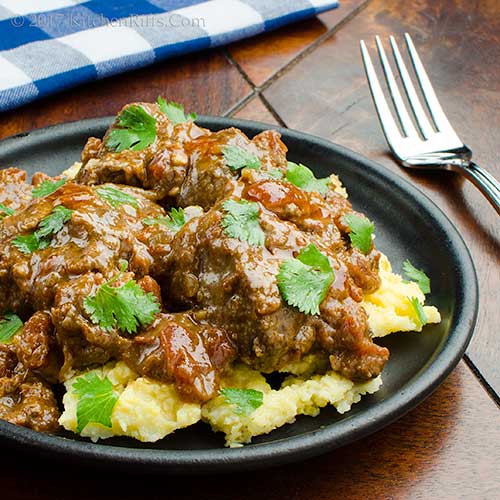 “OK,” said Mrs. Kitchen Riffs. “So vacation is over and it’s back to blogland.”

“We had a great time,” I said. “A cruise, on the Regent Seven Seas Explorer.”

“Yup, we filled up on Dover sole and lamb,” I said. “As we sailed across the English Channel to Saint-Malo.”

“Where we got to see Mont Saint-Michel,” said Mrs K R. “So cool to visit an 8th century abbey that’s surrounded by water at high tide.”

“It rises over 300 feet above sea level – and we walked all the way to the top,” I said. “Lots of steps. So it was nice to sail on to the city of Bordeaux, and stay overnight.”

“Bordeaux looks like a miniature version of Paris,” said Mrs K R. “And of course we tasted wine. Lots of wine.”

“All of it lovely, and local,” I said. “Then we made our way to Bilbao, Spain. Another overnight.”

“Yeah, it looks spectacular in pictures,” I said. “But it looks way more interesting in real life.”

“Then on to La Coruña, where we took an excursion to Santiago de Compostela,” said Mrs K R. “So interesting to see it – and think about the hundreds of thousands of pilgrims who travel to it each year over the 500-mile Camino de Santiago.”

“Had a really good lunch there, too,” I said. “More research! Then on to Oporto, Portugal.”

“Love all the red tile roofs,” said Mrs K R.  “Such a pretty city. And then onto Cádiz. Home of sherry wine!”

“Which we didn’t have much time to sample, alas,” I said. “Because we took a long excursion to Seville – SO worth seeing.”

“But we did have sherry at lunch,” said Mrs K R. “And some local wine. And loads of fried seafood. More research, of course.”

“And we finally ended up in Barcelona,” I said. “A fascinating city – and much in the news, too.”

“Not to mention jet-lagged,” said Mrs K R. “We need this hearty Rogan Josh to perk us up.”

And she’s not joshing.