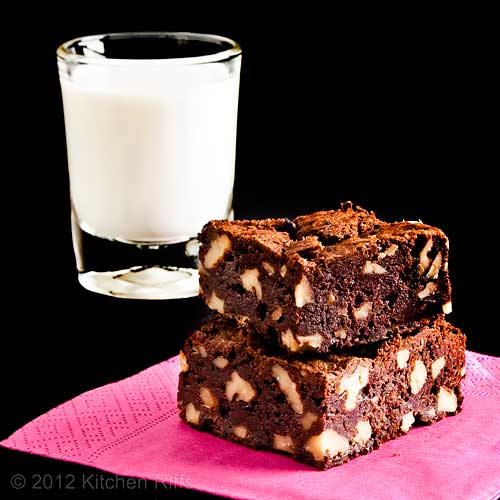 If you like chocolate, you like brownies.  There’s no better vehicle for bundling maximum chocolate flavor into an easy-to-eat package.  Brownies combine chocolate with fat and sugar in a delicate balance that seems to make chocolate even more chocolaty.  And this recipe does it better than any other.

OK, so I haven’t sampled every brownie recipe known to mankind (there are thousands!), but I’ve had more than my share.  And if there’s a better recipe out there — one that delivers deeper, richer chocolate flavor — I’d like to know about it.  Until someone demonstrates otherwise, I can confidently say that this recipe is the champion.

How appropriate!  With the Olympics going on right now, you can bake a batch — and win your own gold medal. 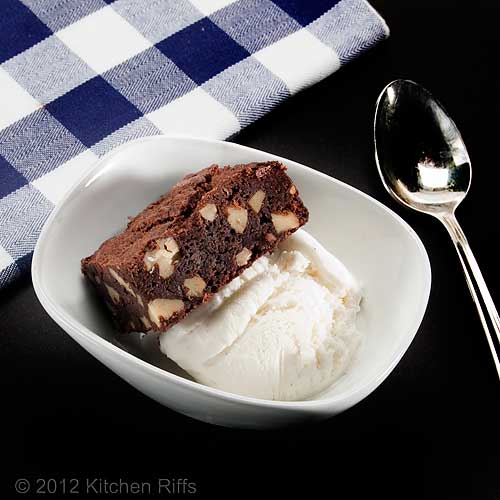 Although I do most of the cooking in our household, dessert really isn’t my thing.  Oh, I can assemble the odd desert or two (like Easy Peach Cobbler; and my Chocolate Mousse — a recipe I still owe you — is spectacular).  But Mrs. Kitchen Riffs is the real dessert maven.  It’s a good arrangement:  She bakes, I eat.  She’s also a major chocoholic, and she’s scoured every cookbook in our considerable collection (and made countless visits to the library) in search of the ultimate brownie recipe.  So all the knowledge and wisdom in this post is hers.

There’s one downside with these brownies, though.  The recipe suggests that you wait at least 5 — five!! — hours before removing them from the pan and eating them.  And I have to admit that, if you don’t wait, they’ll crumble when you cut them.  So you’ll have to torture yourself by waiting far longer than most people find reasonable before enjoying them.  But good news!  Even if you cut them too soon (and they disintegrate into crumbs), they’ll still taste great.  You just need a fork.  I think you can imagine how I know this.

This recipe is adapted from Brownies by Linda Burum. It takes maybe 25 minutes to put together a batch, and another 30 to bake them. (Plus the 5 — five!! — hours of waiting until you can cut them.) The recipe makes an 8 x 8 inch pan of brownies. 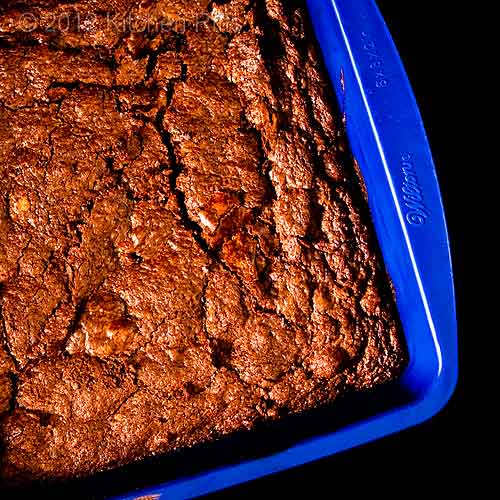 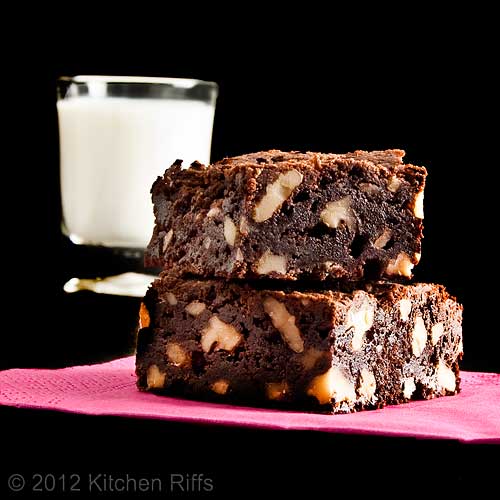 “Is this a joke?!” I asked Mrs K R the first time she baked these brownies — and then announced that we had to let them rest for 5 hours before cutting.  “The brownies are right here, and so am I.  I can’t wait 5 hours before tasting these!  No normal person could!”  I may have had tears in my eyes as I said that.

“No joke,” she replied, handing me a tissue.  “Probably they need to firm up or something.”  Which was indeed the case, as we discovered (and detailed above).

But their aroma alone was driving us wild with desire, so what were we supposed to do?  Go to a movie?  Like maybe War and Peace?

So of course we cut into those brownies.  And enjoyed our crumbs.  Best darn crumbs I ever ate!

Nowadays, Mrs K R always makes a double batch of these.  That way we can enjoy their great flavor immediately, but still have enough to cool properly and cut into decent-sized pieces.

It works out well.  We can have our crumbs.  And our brownies too.