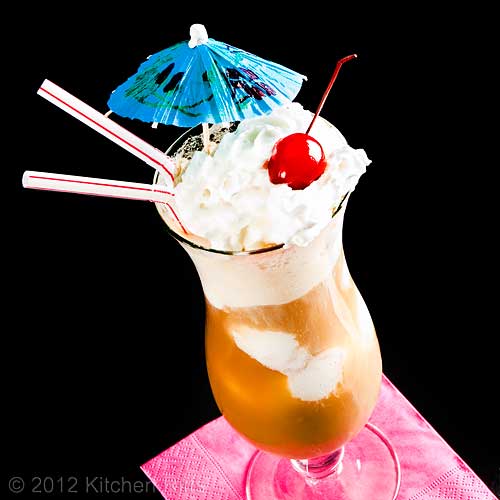 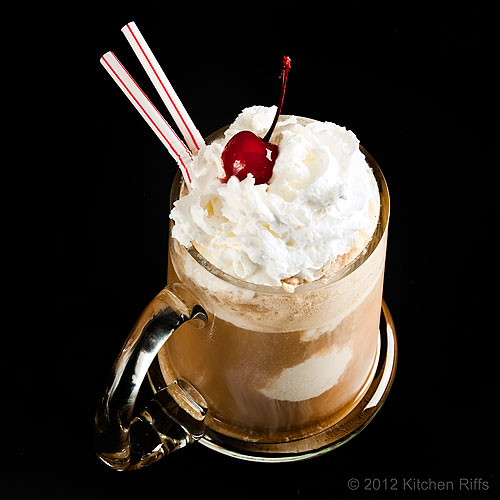 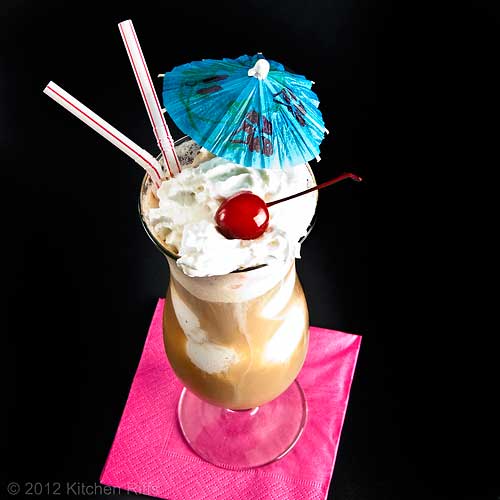 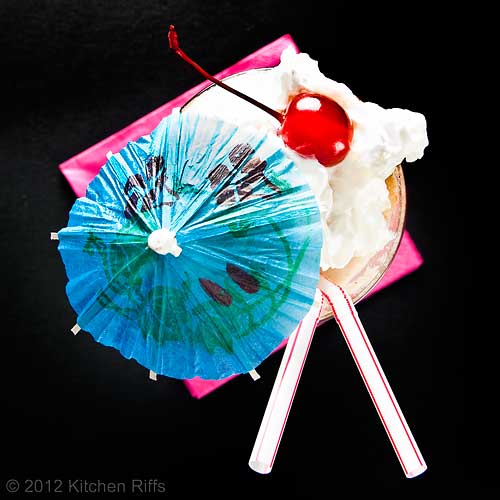 Now I want to get in my car and head to Costco for that CASE of Fitz's Root Beer I passed on yesterday. We shall partake in root beer floats this weekend. Love the pics!

Ooh I love ice cream sodas and it's been so, so, long since I've had one. I loved it when they would foam up the way they do. It's kind of a firm foam. Hmm, I may have to make one today. That sounds good.

Thanks for reminding me about this oldie but goodie!

Hi Kelly, Fitz's Root Beer is a bit on the sweet side, so it's perfect in this recipe. Enjoy your floats! Thanks for stopping by.

Hi Vicki, I love posting about oldies but goodies! So much fun - and I hope you do make one today! I'm looking forward to this weekend, when I know I'll have another. Thanks for your comment.

Ice cream sodas rock!!! I do not care if it is winter here I really want to try this soon :D

Hi Guru Uru, I think you should! These are great any time of the year. Thanks for commenting.

Thanks for the reminder that I need to be making root beer floats more often (or ever)! They're such a fun treat. Think I'll whip some up for us this weekend!

Wow, this looks too good! I haven't had a root beer float (or any kind of float for that matter) in such a long time!

Hi Wicked Noodle, this weekend would be good. ;-) Easy to forget about these, but everyone really should have one now and then. Thanks for the comment.

Hi Cathleen, I know, I'd really bad reminding everyone about these. ;-) Thanks for your comment.

Hi Jay, thanks for your kind words, and your comment.

Totally loved these as a kid. Especially after playing tennis all afternoon. Nothing like a brain freeze to relax you after all that exertion. ;)

Hi Carolyn, those "brain freezes" are pretty good, aren't they? ;-) Such a simple dish, but so good. Thanks for taking time to comment.

Oh, that's a great idea! I need some cocktail basics. Looking forward to learn it here! :)

I've always enjoyed the root beer floats at A&W as a kid. Didn't know they were called black cows :) You make me want to have one right now.

Oh wow, I love your photos! I've never been that fond of root beer, but my friends all love them. I might just make this for our next party. :D

Hi Marina, I hope you'll find the upcoming post (probably on Monday) on cocktails basics useful! I'm really looking forward to the whole Summer Sippin' Series. Thanks for your comment.

Hi Biren, root beer floats at A&W were great! I loved those big, heavy mugs they had. There's better root beer than A&W - lots better - but I still use them in my Black Cows for nostalgia's sake. The "Black Cow" name isn't universal - lots of people don't know it. But it's reasonably popular. Heck, the band Steely Dan has a song named "Black Cow" (back from the 70's). Thanks for commenting.

Hi Jenny, if your friends like root beer, they'll love these! Thanks for your kind words, and your comment.

Oh - I definitely remember the Brown Cow and A&W root beer! In Louisiana we always used chocolate ice cream in a Brown Cow. That may have been because that's what we always had, but it didn't matter because I LOVED it! What a great idea for Memorial Day! Thanks for the reminder of such a great treat!

Hi mjskit, it's always interesting to me how food varies regionally. The chocolate ice cream is delish, but vanilla always speaks to me because, well, that's what I had as a kid. Hope you enjoy your Brown Cow this weekend! ;-) Thanks for the comment.

This is absolutely perfect for this Memorial Day weekend that I know will be very hot here in SoCal. Those drinks look pretty that I'm not sure if I want to even touch it. I may have to stare at it for a while. :)

Hi Ray, stare at it too long and it will melt! Hope you have a chance to have one this weekend. Thanks for your comment.

What an exciting drink! I'd love to sip that tonight on my balcony...

Hi Rosa, it's a lot of fun! Really enjoyable. And great for sipping on a balcony. Thanks for your comment.

Lovely. I love root beer or soda floats of all kind. It is brilliant idea to post summer sipping series. Can you includes some more non-alcohol drinks by any chance?

OMG! Your food pictures are absolutely amazing!! Your presentation is gorgeous and I want to sip this right now.

Hi Holly, aren't root beer floats great? Including some non-alcoholic drinks is a good idea — I'll definitely try to do that. Thanks for your comment.

Hi Purabi, you should probably make one right this instant! ;-) Well, as soon as you can. Thanks for your kind words, and your comment.

Root Beer Floats are my very best favorite! Love the Black Cow tidbits too. I'll be saving this post link for National Black Cow Day which just happens to be August 19!

If you're feeling really energetic, I did a post about Mr. Hires and the Black Cow a while back. It also includes a vintage Root Beer recipe!

Thanks for sharing...Now I'm craving a Black Cow!

P.S. Let me know and I'll tweet you the scanned recipe.

Hi Louise, didn't know that National Black Cow Day was in August. There's so many food celebrations it's hard to keep up. Yes, please tweet the recipe! Thanks for the comment.

Aah the brown cow. classic. amazing. delicious. Thanks for sharing! and your photos are gorgeous BTW!

Summer is definitely here...Can't wait to start whipping this up. Love the little parasols. Thanks for sharing!

Hi glutenfree, really great, isn't it? Thanks for your kind words, and your comment.

I love this! I haven't had root beer for a long time! This makes me thirsty! I love how you decorated with the umbrella!

What a fun post for the holiday weekend! I had no idea where the term "sundae" came from, so once again I've learned something from your post. I must admit that I'm not a big fan of soft drinks, but I know the rest of my family would love this!

My daughter loves root beer floats. I'll have to tell her they're called black cows, I didn't know that. Also, I love a good cocktail but I don't think I want it mixed with ice cream!

Hi Malou, yeah, it's been hot, hasn't it? Black Cows will taste good this weekend. And lucky me, I need to photography the Mojitas, so I'll be having one of those too! Thanks for your comment.

Hi Nami, it's the best way to drink root beer, IMO! I did have fun with the umbrella, I must admit. Thanks for stopping by.

Hi Beth, I was interested to learn about the origin of "sundae" too. There are so many fun food facts out there! And you owe it to the rest of your family to serve these sometime! Thanks for commenting.

Hi Julie, I agree with you on ice cream and cocktails - I've never understood the appeal. And I really wouldn't want to mess up my Black Cow that way! Thanks for taking time to comment.

I finally have you saved in my favorites in my phone, I really do enjoy your blog! I was reading a book the other day, and they were talking about root beer floats......I immediately had a craving:-) I am looking forward to your summertime series! My favorite summer drink growing up was Grape Apes, it is a simple yet fun summer drink.....I will have to share it on my site now:-) Have a great week! Hugs, Terra

Hi Terra, thank you so much for the kind words (and, of course, for taking time to comment). Do please share the Grape Apes on your blog - I hadn't heard about it but just looked it up,and it sounds like fun!

I haven't had a root beer float in years!

Hi Mother Rimmy, well, they're not the healthiest thing in the world - but awfully good! It's an occasional treat for us. Thanks for your comment.

I love how easy this is to make. The boyfriend is going to be thrilled!

Hi Chung-Ah, easy & delicious! Hope your boyfriend likes them. Thanks for the comment.

I haven't tasted a real root beer float in a long time. This looks beyond delicious. And it would be perfect at anytime. I am actually thinking; what a nice special treat for Christmas Eve.

Hi Judy, one of these would be a nice treat for Christmas Eve! Great idea! They're so good, I'll have one anytime. ;-) Thanks for the comment.