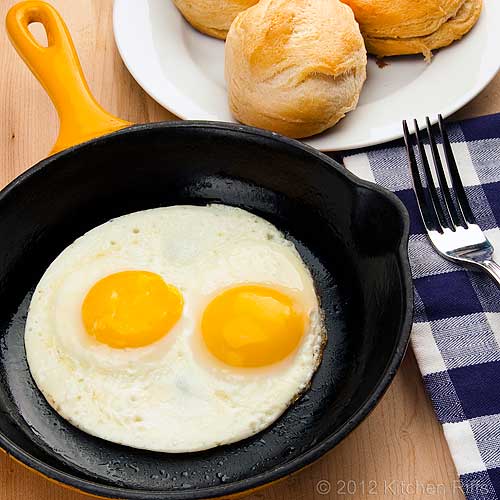 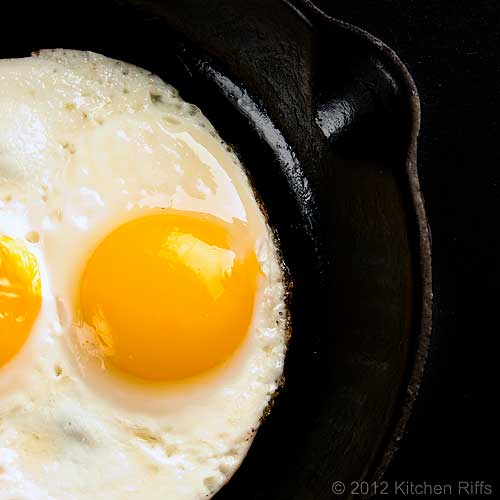 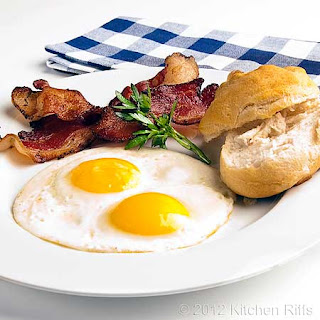 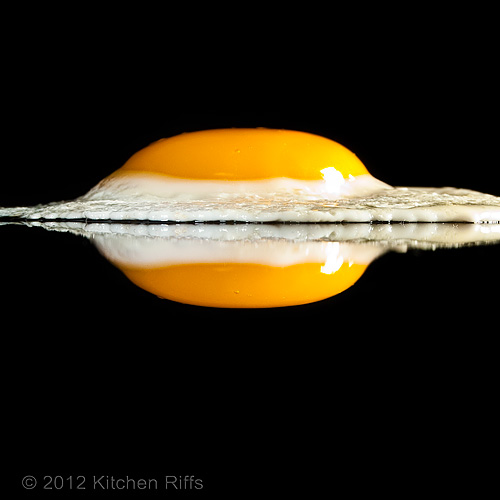 I always think of eggs as a miracle food. Who discovered their properties in baking? Eggs elevate baked goods like nothing else does, and they're pretty good on their own, too.

And I'm enchanted by the idea of flipping eggs.

Hi Beth, eggs really are a great food. And you're right about their baking properties - just incredible. Flipping eggs is a lot of fun - but does take a bit of practice to learn how to do it. At least it did for me. But once you learn how to do it, you'll never go back to using a spatula for turning eggs. Thanks for taking time to comment.

A few times a week ... over medium. It took years for me to perfect the flip. Should've had this post years ago!

Two eggs basted in bacon grease ... that's what I'm craving right now thanks to your post! Informative and hunger-inducing as always!

P.S. We typically do "breakfast for dinner" at least once a week!

Who knew photos of eggs could be so beautiful? I love basted eggs but I never thought to use chicken stock before. Yummy!

Hi Claudia, isn't the flip great? Once you figure it out - and it can take some time. Thanks for your comment.

Hi Kimberly, I love breakfast for dinner! And bacon grease is the best. I sometimes microwave our bacon, which does a pretty good job of cooking it - but you lose all the grease! Sorry to make you hungry. ;-) Thanks for your comment.

Hi TastefullyJulie, even better than chicken stock is a bit of red wine - although it'll color your eggs. Thanks for the kind words, and the comment.

I 'm not an egg flipper (yet!), but I prefer scrambled eggs so I guess I don't really need to learn! Gorgeous photos here.

Hi Jeanne, flipping eggs is loads of fun, but not real high on the list of things most people need to learn how to do! ;-) Thanks for the compliment, and for commenting.

What a great tutorial - so thorough! I've been cooking eggs a long time and I still learned a few things here. I've never even tried to flip my eggs without a spatula; I know what I'm doing this weekend :-)

Perfectly done has come up with another meaning - these eggs look perfect and make me want to gobble them up when I cannot even stand omelettes ;)

Hi Katherine, have fun this weekend! This isn't one of those skills anyone really needs, but it's so satisfying to learn! Thanks for stopping by.

Hi Choc Chip Uru, what a nice thing to say! Thanks for that, and for taking time to comment.

Hi Laura, and don't forget over hard - for fried egg sandwiches (a seriously underrated sandwich). Thanks for your comment.

I prefer my eggs over easy or in an omelet. However I'm not too picky other than I hate them in salads. I don't know why but I do.

Lots of great information about eggs that's so helpful. Plus the photo at the end with the eggs reflection is exquisite. You need to submit that someplace. I'm sure it would win an award. Maybe the Egg Council.

What a wonderful tribute to eggs! This actually got me thinking that I don't eat enough eggs (barely few times a month) and always sunny side up :)

Hi Vicki, I love how everyone's taste is different! I really enjoy an egg in salads for, example. And I love omelets, too. Thanks for the kind words about the last photo. I like it a lot, too; but unless you know what it is, it doesn't really say "egg" - which is why it's not my first photo. (Kinda looks like Saturn!) Other than that, it's pretty cool! Thanks for taking time to comment.

Hi Gourmantine, sunny side up works. ;-) One of the prettiest ways to serve eggs, IMO. Thanks for your comment.

Excellent post on fried eggs! There are just so many ways you can fry an egg! Personally I like to fry my eggs over medium in my cast iron which cooks eggs perfectly. Thanks again for sharing this!

Hi Yi, eggs are so versatile! I love them. And love cast iron, too (although when it comes to frying eggs, I won't be separated from my 7-inch nonstick pan - all that flipping, you know). Thanks for stopping by.

Hi Nami, I love cooking eggs! Does it show? ;-) Thanks for the nice words, and the comment.

Love fried eggs! I feel like they don't always get love. Sunnyside, overeasy foreves for me:)

Hi Patty, I love them too! And I'll eat them any which way - I like them all. Thanks for your comment.

I could eat eggs EVERYDAY! I like them anyway, but over-easy is my favorite:-) I love yolk in my egg sandwich, makes it perfect! Gorgeous pictures! Take care, Terra

Hi Terra, me too! They've got a great taste, are healthy, and remarkably low in calories. Thanks for the kind words, and the comment.

Those are THE most perfect sunny-side up eggs I've ever seen. You have mad skills with eggs. ;)

Carolyn! Such an incredibly nice thing to say. Thank you so much.