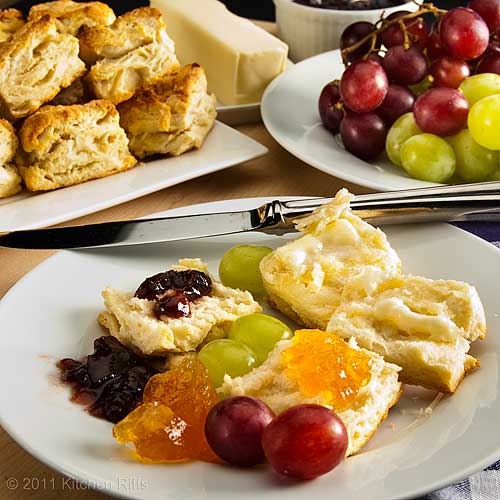 Biscuits are quick to make and supremely satisfying to eat, particularly when gobbled hot from the oven.

They are also part of American history.  In the early colonial days, homes often lacked ovens suitable for bread making, so “quick breads” like biscuits were popular, and would sometimes be baked fresh for each meal.  In many households today, they’re a Thanksgiving tradition.

This recipe calls for just a few pantry staples:  flour, baking powder, butter or shortening, and sweet milk.  No buttermilk needed (it makes great biscuits, but most of us don’t have it in the refrigerator).

And the best thing about this recipe?  You can be eating biscuits in under 30 minutes from now! 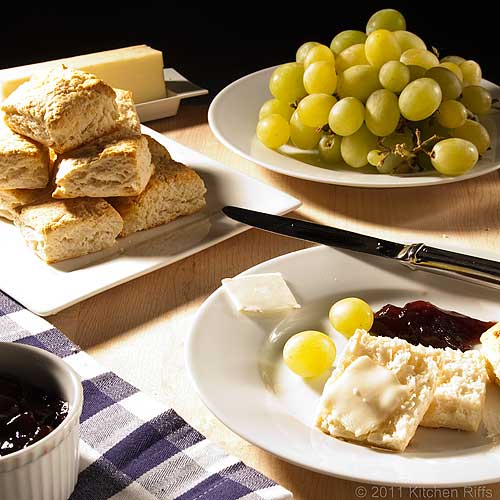 For most of us these days, biscuit making is a fairly rare event, so we may have little practice with them.  When we do get around to making a batch, they often turn out flat and dense (as in hardtack).

Achieving light and airy biscuits is more about technique and “touch” than following a recipe.  The tricky part of biscuit making is to incorporate the fat and liquid into the flour so it just forms a dough that holds together enough to be shaped and cut into biscuits.  You don’t want to work it more than that.  The less you handle the dough, the softer the texture and the higher the rise of the baked biscuit.

Fat in the form of lard, shortening, or butter is a necessity in biscuits.  Fat helps tenderize the dough (by preventing gluten formation in the flour).  It also adds flavor (particularly if you use butter).  And because the fat is “cut into” the dough, it retains a distinct texture (sort of a granularity).  This texture allows spaces to form between dough layers and promotes “flakiness.”

You can cut the fat into the flour with a food processor, by hand, or using a mixer.  Most of us will probably get the best results using a food processor, so I detail that method below.  In the Notes, I also discuss how to make biscuits by hand or with a mixer.

Most biscuit recipes are fairly similar, and every good general cookbook has one.  My recipe is adapted from the one on the back of the Clabber Girl Baking Powder can.  Don’t laugh — it’s a good recipe.  It yields about 12 biscuits (depending on how big you cut them). 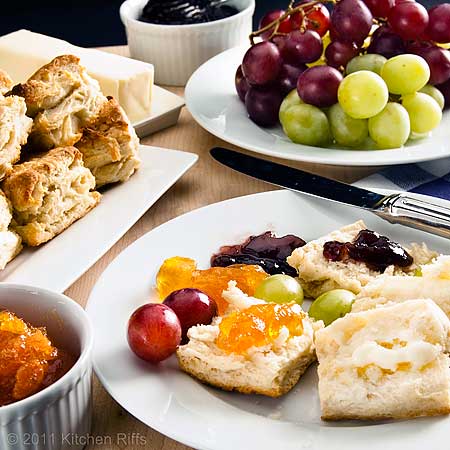 Biscuits were never a daily staple when I was growing up.  They only appeared on the table at holidays, especially Thanksgiving.  In fact, I’ve eaten biscuits on Thanksgiving for as long as I can remember.

When I was younger, we usually consumed biscuits with the rest of the Thanksgiving feast.  In recent years, however, our capacity for gluttony has diminished at the Kitchen Riffs household.  So to cut down on the number of dishes we feel compelled to consume at dinner, we generally forgo a bread course.  Instead, Mrs. Kitchen Riffs bakes biscuits for breakfast on Thanksgiving morning (she’s the primo biscuit baker in our household).  Biscuits are natural breakfast fare, so it works out well.

This year we’re celebrating Thanksgiving at my younger sister’s, though.  The family expects biscuits with dinner, and Mrs. Kitchen Riffs has already announced that she’ll be happy to provide them.

Of course, she’ll probably make them for breakfast too, since that’s now become our household version of the tradition.  So I’ll wind up having double biscuits.

Not that I’m complaining.  Overeating is also a Thanksgiving tradition, after all.

Ohhhhh-I just love biscuits. And I am still obsessed with your photos. But I will try to give up that obsession for the moment just to go make biscuits. Yum!

Hi Abbe, thanks for the compliment! And, yes, definitely make some biscuits - they're so good hot and fresh from the oven! Thanks for commenting.

Hi Russell, thanks! They were wonderful! Thanks for stopping by.

Great information and so detailed. In our house it's become tradition to make popovers on Thanksgiving. Your biscuits though look like they could become a new tradition in our house if I made them. They look delicious.

My bowl runneth over -
biscuits for all!
Give thanks to the Kitchen!
Now bring on the chow.

I lick the platter
clean.

Your Friend (for life),
Beethoven

@Vicki, popovers sounds great too. We haven't made those for quite awhile; will have to do again, soon. Biggest problem with biscuits, for me, is they're like potato chips - you can't have just one! Thanks for your comment.

@Beethoven, always amusing when you stop by! "I lick the platter clean" could easily be my motto, too. Hope you enjoyed the biscuits! Thanks.

Your biscuits look delicious, and I love all the helpful advice you've given!

Hi Beth, thanks for the compliment! The biscuits are delicious, if I do say so myself. Thanks for taking time to comment.

I love the history behind these biscuits! This post is so informative, as always. I will have to try these - I have all the ingredients on hand so there's really no excuse! Great recipe, thanks for sharing it!

Hi Katherine, thanks for your kind words! If you try them let me know how you like them. They're easy to make, but kneading and patting the dough into shape does take "touch". As in, it's easy to over-handle the dough. Less is better with this recipe. But if you do over-handle it, no worries - the biscuits will still taste great, just won't rise as much. Thanks for stopping by.

Thank you so much for all your helpful hints! I've gotten in the mood for learning how to make good biscuits this week. Made two batches so far and both were very good and light with a good flavor but I was missing the airyness about them. I have realized my mistake. All my ingredients, sans buttermilk, were warm. Luckily White Lilly flour is sold just around the corner from me so I'm lucky there. I'll post back again and let you know how it goes. :)

Hi Vanessa, thanks for the kind words! Do let us know how White Lily works for you - I really like it a lot. Airy biscuits can be somewhat elusive. The less you handle the biscuit dough, the better. I haven't done it, but when you put your biscuits on the baking sheet you might want to place them so they actually touch. This may make them more airy - worth a try. Thanks for commenting.

I found this recipe several years ago, and every time I make biscuits, I go find this page to refer to! Though, I've made them so many times, I should know it from memory by now, lol. This is a great recipe, and easy to add to! I usually add garlic & onion powder, and a little pepper to the dry ingredients. Occasionally have added cheddar cheese, which the hubby LOVES. I mostly use it for biscuits and gravy, but I've used it for many other dishes, including strawberry shortcake (which is fabulous). Thank you for sharing this with us. :)