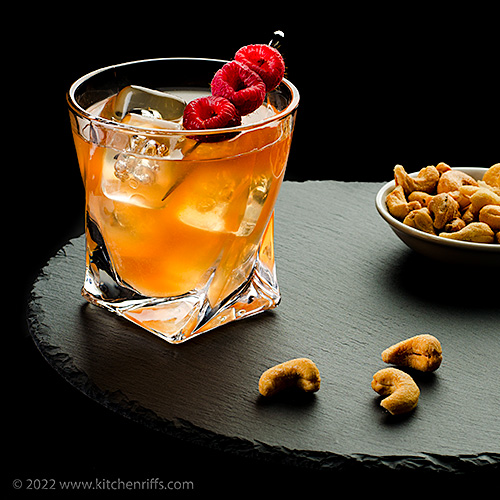 This 19th century drink is kinda, sorta like a raspberry daiquiri

Amber rum, lime juice, and sweetener (in the form of raspberry syrup)? Sounds a lot like a raspberry daiquiri to us. Add a dash of orange curaçao, and you’ve got the Knickerbocker.

It’s one of the older cocktails on record, dating back at least to the 1860s.

And still good after all these years. 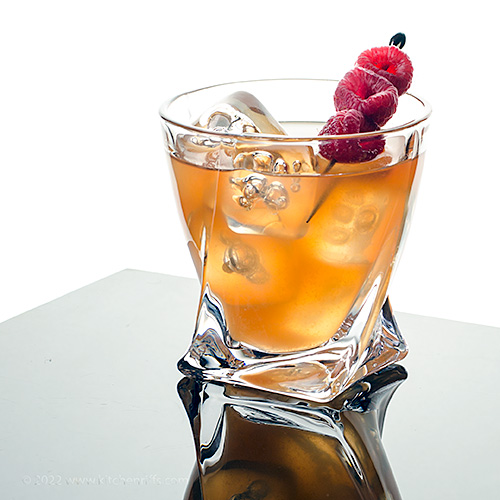 We love the combo of rum and lime juice. Which is why the Classic Daiquiri – with a crisp flavor that’s on the dry side – is one of our favorite cocktails.

But the classic daiquiri uses white rum, while this drink requires amber rum (along with berry and orange flavoring). So the Knickerbocker’s flavor is more complex (and also a bit sweeter). It’s a drink that invites lingering over. That’s why we think it’s better served over ice rather than straight up. 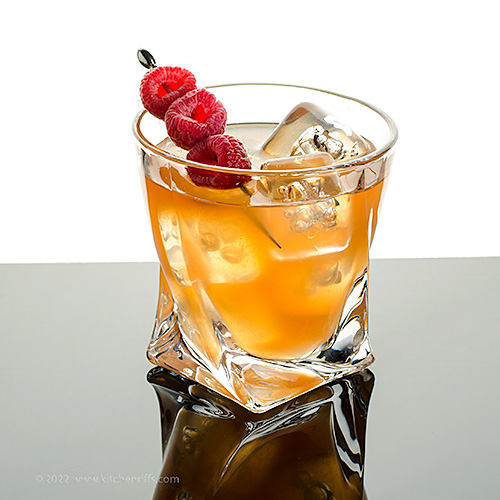 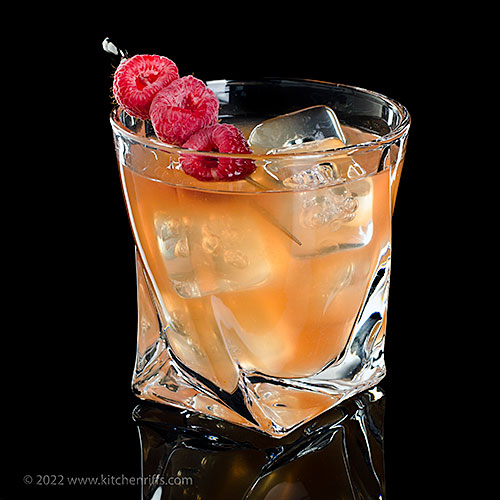 “That’s pretty much the Rule of Rum when it comes to drinks,” I said.

“Hey, are you giving me the raspberry?” I said.

I can’t wait to try this drink, John. If I can get myself some Chambord today, I may toss these together for drinks this evening. (I’m entertaining right after work, otherwise I’d make the raspberry syrup!) Terrific recipe. Thanks!

Hi David, you'll love this! Such a great drink. :-) Thanks for the comment. (BTW, Blogger keeps making it more and more of a pain to comment, doesn't it?)

Knickerbocker...such a fun name for a beautiful and tasty drink! I wish I could have one now :-) You made the best cocktails, John.

Hi Angie, this is a good one! And we love the name, too. :-) Thanks for the comment.

Looks like a great flavor combination. Raspberry, lime, and orange would be good with or without alcohol.

Hi Mae, those three flavors are great together! Thanks for the comment.

It looks and sounds very tasty.

What a fun name! Raspberry is one of my favorite flavors

Hi Dahn, raspberries are excellent in cocktails. Or all by themselves, of course. :-) Thanks for the comment.

Given the name, I assumed it came from the Knickerbocker Hotel in NYC, but that didn't open until 1906. Sounds like a delicious cocktail anyway! And I do love rum. Thanks, John!

Hi Terry, that was our assumption, too! And there was also a Knickerbocker Club, but that didn't originate until after Thomas published his book. So the name, at least to us, remains a mystery. :-) Thanks for the comment.

amber rum is something i've never tried but definitely need it so i can try this!

HI Ashley, amber rum has a deeper flavor than white rum -- good stuff. :-) Thanks for the comment.

I love the name of this cocktail. It sounds great, one that I would enjoy!

Knickerbocker, we also have the same name drink in the Phillipines, apart from the name and your description of complex flavours, the similarity ends there. Knickerbocker that I know is made of a mix of fruits like mango, banana, apple, and watermelon mixed together with, jelly, shaved ice, and sweet milk, with a scoop of ice cream on top. Having said that I love your Knickerbocker as well, you cant be wrong with liquor🤣

As usual your drink photos are beautiful! I just bought blue curacao and had to endure more jokes about the biggest liquor cabinet. But I think I can do this with no shopping, especially if I wait for the raspberries to come in!

Not sure why I am anonymous… I will never understand the blogosphere… Thanks for recognizing me! I actually decided to make the simple syrup and am glad I did. We absolutely loved this cocktail and will probably have them daily till the raspberry simple syrup is gone! Thanks!

HI Inger, you should see our liquor cabinet. :-) Thanks for the comment.

Hi David, Blogger changed something about how some comments are processed (we use the "imbedded" commenting feature so one can reply directly to a comment, and that's the one of course they decided to change and make more difficult to use). Only reason I recognized you was you commented on the blog right after you commented on Facebook! :-) Anyway, glad you liked this! And thanks for letting me know. :-)

Another fabulous rum cocktail to try out - and what a great name!

Rum, orange, and raspberry - such a wonderful flavour marriage, simple yet elegant. Beautifully styled, too!

Hi Ben, isn't that a wonderful flavor combo? Such a nice drink! :-) Thanks for the comment.

I'll order one of these for Mother's Day! Sounds like a perfect drink for the occasion! I mean after the yard work!

this sounds and looks like a splendid drink KR. love your photos! i am teetotal atm due to taking antibiotics tho i have pretty much given up the booze since my fall last year. not that i was drunk mind you!!

Puts a person in a New York State of mind.

Love the name of this cocktail John! I didn't even know there was an orange curacao. Good to know!

Hi Abbe, :-) Very refreshing after the yard work! Thanks for the comment.

Hi Sherry, it's a pretty drink, isn't it? Thanks for the comment.

Hi Bernadette, with all the hustle and bustle of the big city, one needs a relaxing drink like this! :-) Thanks for the comment.

Hi Simone, isn't this a fun drink? And SO good! :-) Thanks for the comment.

Sounds really nice, John! I much prefer amber rum to white, much more flavor if you ask me. I'm intrigued the name though. I don't usually associate rum with old New York. There must be an interesting back story there...

Hi Frank, actually rum was one of the most common liquors in early American history -- first imported from the islands in the Caribbean where sugar cane was processed into molasses and distilled into rum. Then they imported the molasses and distilled it in the U.S. By the mid 19th century, though, I believe whiskey (in the form of rye) would have been more popular, but rum still had its following. So much to learn about cocktail history! :-) Thanks for the comment.

First John, your photography is always breath taking. You can even see those little fluffy bits on the raspberry. So dreamy. Would love this knickerbocker cocktail on the balcony while watching the sunset - my kind of night cap. I agree over ice for sure!

Hi Bobbi, this is a great drink -- definitely balcony worthy. :-) Thanks for the very kind comment.

Just the name of this cocktail makes me want one. Sounds like a fun drink and some different flavors than I've ever had in a cocktail.

Hi MJ, the flavor is rather nice. :-) Thanks for the comment.

You're going to drive me to drink! ha! Your cocktail photos are always stunning.

Yum! I think the Knickerbocker is going to show up at my next party.

Hi Lea Ann, aw, thanks for that very kind comment! :-)

Hi Jeff, it'll be a great party! :-) Thanks for the comment.

You are the King and Queen of sensational cocktails, anything with rum and lime in it is perfect in our books. I've heard of this drink but never had it, that needs to be rectified. Beautiful photograph, I'd love to have your photography skills. Thanks KR.

Hi Pauline, isn't this a great drink? We agree with you about rum and lime -- terrific combo. :-) Thanks for the very kind comment.

Cheers to the Knickerbocker -- a cocktail with a fun name and beautiful garnish! What's not to like? ;)

I love your recipes and the information behind them. I do wish you had a print button available that would make it easier to print off the recipe. Is there one? Perhaps I am just missing it?

This is an interesting name for a drink!

Hi Anonymous, no print button, alas -- we haven't found a recipe plug-in that we like. Also, the Notes often contain info that is important, and no recipe plug-in that we've seen would allow the inclusion of those. We normally just take a phone into the kitchen and use that. Or copy, paste, and print. (Yeah, that's pretty 20th, century, but it works!). Sorry. And thanks for the comment.

Love the raspberry in here. It sounds delicious and a lovely drink for summer.

Hi Amy, it's a terrific summer drink! :-) Thanks for the comment.

Delicious drink and interesting factoid on the origin of the name knickerbocker. GREG

Not only does this sound delicious, but I might have to make it just for that awesome name! Who doesn't want to say it over and over!? :-) ~Valentina

Hi Valentina, it is rather a fun name to say, isn't it? :-) Thanks for the comment.

Howdy John, as usual your image are top notch. I thinking after a few drinks of this I'd roll up my knickers and make another...

I love the backstory you shared behind this drink, very cool that it's such an old cocktail recipe. It will be like drinking a little history!! We will definitely try this, thanks John! 🥃

I really enjoyed the cocktail! I tried it straight up but tossed an ice cube in - it needs that to shine. I also love the glass you used in your beautiful photograph. Can you share the maker? My old fashioned glasses are serviceable but very boring!

Hi Anonymous, glad you enjoyed this! I'd be happy to share the maker of the glass if I remembered, which unfortunately I don't. But just do a search for old-fashioned glasses on Amazon -- there are several people who make "twist" or "swirl" glasses. I would guess most of them are good. Thanks for the comment.