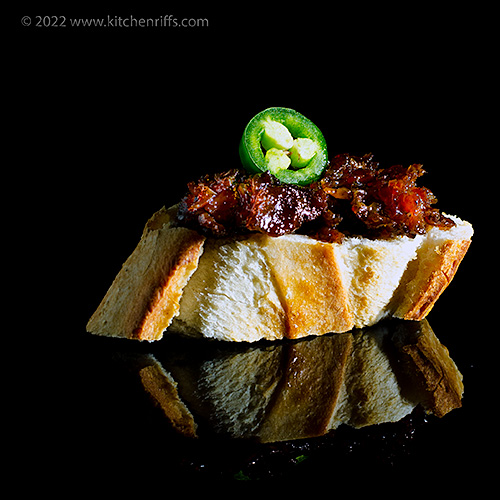 A zesty spread for breakfast breads or predinner canapés

This bacon jam (you could also call it relish or chutney) makes a great addition to morning biscuits or toast. But it’s also terrific atop a cracker (preferably with a bed of cream cheese or pimento cheese) as a canapé.

Or use it on about anything you can imagine. If you can think of it, it’ll probably be good.

Because bacon. One of our favorite food groups. 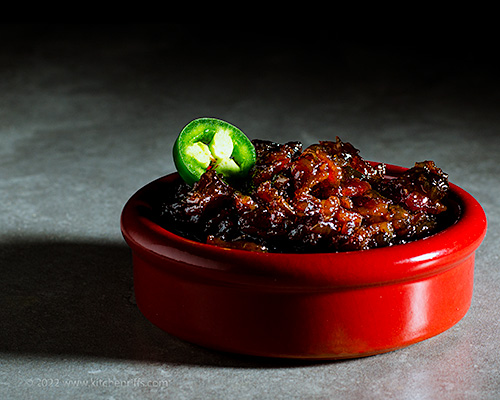 You can also use this jam as a “sauce” on main dishes. Dollop a bit on sautéed scallops. Add a spoonful to grilled salmon, pork, or chicken. Or even steak. Add a tablespoon or two to your next stir fry. And wake up your morning oatmeal with a garnish of bacon jam (we haven’t tried the last two, but why not?)

Prep time for this recipe is 10 to 15 minutes. Cooking time adds at least an hour, often more. We’d allow at least 2 hours for making this from start to finish (though much of the cooking time is unattended).

This jam will keep for at least a week if refrigerated in an airtight container. Much longer than that calls for freezing (because although this is called “jam,” it can’t match a traditional preserve for keeping qualities). 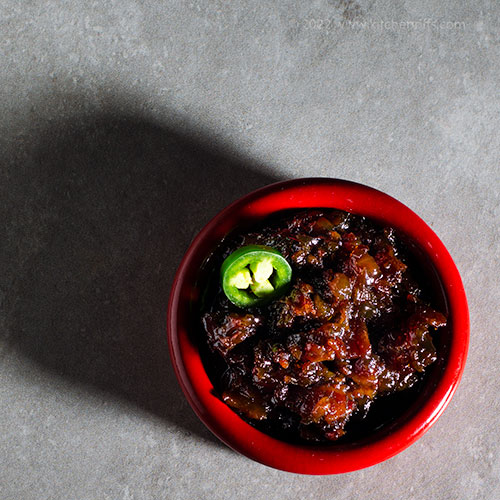 “Fun recipe,” I said. “Jam packed with flavor, you might say.”

“Maybe you should jam the brakes on those jokes,” said Mrs K R. “They’re getting old.”

“I prefer to think of them as well preserved,” I said.

“I was expecting bacon,” said Mrs K R. “Instead, I’m getting ham-bushed.”

“Speaking of which, you’ve heard of Francis Bacon,” I said. “But you probably don’t know about his son, Chris P. Bacon, heh heh heh.”

“If you keep peppering me with these comments, I may need to turn up the heat,” said Mrs K R.

Better stop before I get myself in a jam.

Bacon and coffee...what an explosion of flavours!

Hi Angie, it's really good stuff. :-) Thanks for the comment.

Hi Pam, worth drooling over. :-) Thanks for the comment.

Such a tasty, versatile condiment! I'd spread it on everything (except maybe dessert, LOL).

Hi Liz, actually, this would probably be pretty good on ice cream! :-) Thanks for the comment.

We fondly call it pig jelly here! For an explosive taste treat spread it on a pimento sandwich then grill it. We only have it about once a year, but it is worth it. Of course you can eat nothing else for the day other than lettuce or cucumber slices!

Oh boy, I would make this right away if I wasn’t leaving for Germany. I love, love your humor.

Hi Anne, we actually some some pimento grilled cheese sandwiches with this. :-) Love the pig jelly name! Thanks for the comment.

Hi Gerlinde (I assume!), have a great time in Germany! Thanks for the comment.

Oh wow! I love bacon jam. It never lasts long in our house. I haven't had it with jalapeno but that sure sounds good.

That definitely is an over-the-top flavor profile! I can't even imagine something like that on oatmeal.

HI Mae, oatmeal does sound a bit odd, we know, but savory things work quite well with oatmeal. And of course it contains brown sugar, which a lot of people like on oatmeal. :-) Thanks for the comment.

I haven't made bacon jam in a long time so thanks for that reminder. I made mine using some bacon I could cured myself in maple syrup and bourbon but now I see where I need to add jalapeno. Sounds great John!

Hi Barb, we almost presented a recipe with bourbon instead of coffee. But decided the coffee kind of mimicked red-eye gravy flavor, so went in that direction. :-) Thanks for the comment.

OMG that photo speaks for itself, It looks so good I want to grab it of my screen. Such a nice topper for canape crisps

Hi Raymund, this is really, really good stuff. :-) Thanks for the comment.

A hugely interesting recipe . . . I have often cooked legs and shoulders of lamb with coffee Swedish-style . . . hmm ! coffee and cream actually :) ! Delicious flavour achieved !! As bacon has not been on the shopping list for more than a few decades methinks, shall perchance look from the sidelines . . . yep, many ways to use this . . . :) !!!

Wow, this looks so delicious and amazing John. I've never had this which I find surprising, such an explosion of flavour. Chris P. BACON? Very clever and funny. Hope you both have a great weekend.

This is Gerlinde trying to make a comment. I just love the photo and the appetizer .

Hi Eha, isn't this a fun recipe? We don't make this very often (NOT the healthiest thing in the world!), but always enjoy it when we do. :-) Thanks for the comment.

Hi Abbe, speaking of honey, we should try making it with some! :-) Thanks for the comment.

Hi Pauline, this is really, really good stuff. :-) Thanks for the comment.

Hi Gerlinde, the Blogger commenting system has become such a pain! Thanks for putting up with the frustration. And thanks, too, for the comment!

Hi David, cheeses are terrific with this. :-) Thanks for the comment.

Oh my! According to teenagers, bacon belongs in its own food group. Your recipe is a going to be a huge hit on cheese boards and so many other recipes.

Hi Bobbi, we agree with your teenagers! :-) Thanks for the comment.

I have always heard about bacon jam but never tried it. The flavors sound AMAZING!

Hi Laura, it's really worthy making a batch -- terrific flavor. :-) Thanks for the comment.

Well this is a very interesting jam. I came here thinking one thing and found a totally different recipe that expected. I love it! The flavors are quite unique with the bacon, jalapeño, coffee?, and apple cider vinegar. Saving this to make soon. Thanks John!

Hi MJ, I suppose we should call this a chutney or relish, but it's really jammy. :-) Thanks for the comment.

John, you know what they say, "everything's better with bacon". I know that's that an old hammy line. Alas, bacon is just a flavor of the past, as for me these days it's on my no-fly list. But, I still love enjoying it virtually...

Hi Ron, good as this is, it certainly isn't the healthiest dish going. But glad you're here to enjoy it virtually. :-) Thanks for the comment.

The best application of bacon jam I've ever had was on a burger! I was concerned it would be too sweet, but it was amazing food pairing for sure. 2nd best was with brie ... oh so good!

Very interesting! I make my own bacon jam, and it's very, very different from this - which very much makes me want to try yours! I'm curious about the coffee!

Hi Judy, bacon jam is great with a burger. Add some pimento cheese, and you'll be in heaven. :-) Thanks for the comment.

Hi Jeff, I remember your bacon jam, and how different it is from this. The coffee sounds odd (or it did to me until I tried it), but it's really a nice addition. Thanks for the comment.

OMG it's bursting with flavours! I need to try ASAP!

Hi FT, you DO need to try this ASAP. :-) Thanks for the comment.

Great top photo! I feel like I can reach into my computer screen and snatch that crostini to savor. If only! But that's how inviting it looks.

Bacon jam sounds amazing. I can never get enough of bacon. Terrific recipe!!

Hi Dawn, bacon is rather addictive, isn't it? :-) Thanks for the comment.

Looks fabulous John, I remember making bacon jam a few years ago, it was delicious.
BTW your blog no longer allows me to comment signed in to Google, I can only comment anonymously (same thing on Angie’s blog).
Eva http://kitcheninspirations.wordpress.com

Hi Eva, isn't this nice? Love this stuff! Sorry that Blogger makes it such a pain to comment -- they keep changing things. There actually is a drop down menu where you can use your name and url, but they don't make it obvious to find, alas. :-( Thanks for the comment.

Hi Izaa, it's really good stuff! :-) Thanks for the comment.

You gotta be kidding me - this is amazing! And I LOVE your "jam session" lol

Hi Ashley, this is SO worth trying! :-) Thanks for the comment.

Who doesn't like caramelized bacon and onions, so these two coming together in one recipe is right in my alley. If looks and sounds ultra tasty!

Love how versatile this jam is!

Hi Taruna, it really is. :-) Thanks for the comment.

Love the "Jam Session!!" AND the jam, of course. Seriously, it sounds amazing -- especially with the addition of the jalapeños. :-) ~Valentina

Hi Valentina, we have fun writing those endings. :-) Thanks for the comment.

During the pandemic, a local restaurant did take up hand minced burgers topped with bacon jam. They were to die for! I totally need to give this a try!

Hi Inger, bacon jam is great on burgers! :-) Thanks for the comment.

WoW presentation photos look amazing! I am sure it must be delicious.

Hi B&S, this was fun to photograph. :-) Thanks for the comment.

I love bacon jam. I haven’t made it in ages. Yours looks wonderful. I’d almost forgotten these beautiful black glass backdrops. I need to pull mine out. Great photo!

Hi Anonymous, we love black acrylic photos! :-) Thanks for the comment.

this sounds marvellous. I have a recipe for bacon jam with bourbon! all the flavour...

Hi Sherry, bourbon is great in bacon jam! :-) Thanks for the comment.