The Remember the Maine Cocktail 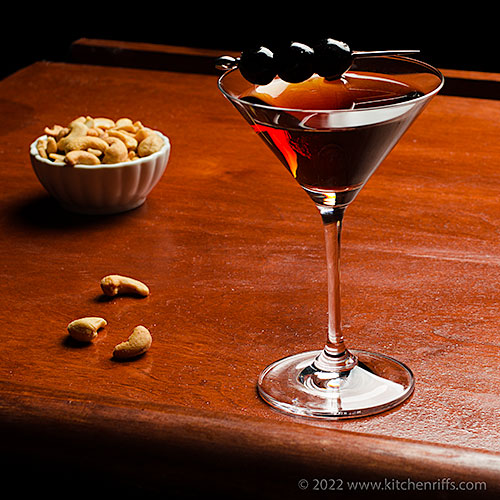 The USS Maine was a battleship that exploded and sank in Havana Harbor in February 1898, during Cuba’s war for independence. Soon afterwards, “Remember the Maine!” became a rallying cry that pushed the US to war with Spain. We’ll provide more history in the Notes – but right now we want to discuss how good this drink is.

It’s a magical mixture of rye whiskey, sweet vermouth, and Heering Cherry Liqueur, plus a touch of absinthe. So it’s a Manhattan Cocktail with extra zing.

The flavor will explode on your tongue. Fitting, we suppose. 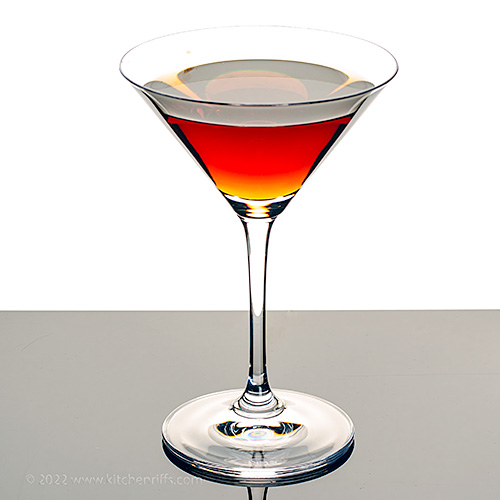 Recipe: The Remember the Maine Cocktail

This drink is a variant of the Manhattan Cocktail. You can make a Manhattan with bourbon (many people do), but we prefer rye. And we think the Remember the Maine Cocktail really requires rye – bourbon is often a touch sweet, and Heering Cherry Liqueur is already sweet enough. 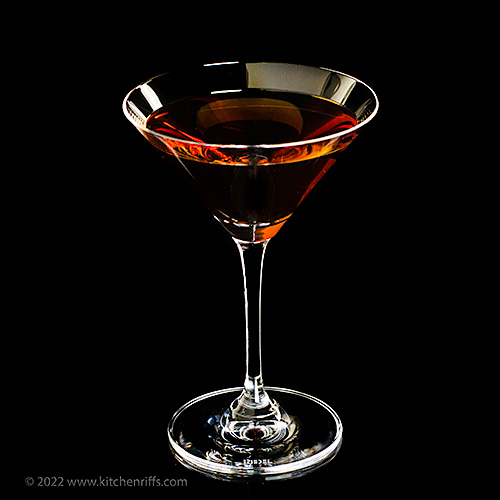 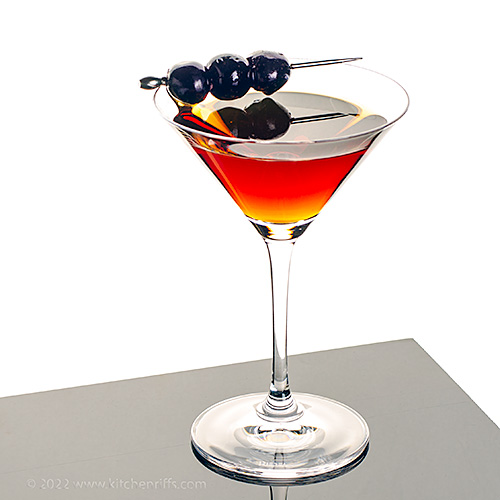 “Yup,” I said. “And after a couple of sips, the taste really sinks in.”

“Is there a fire in your bunker?” said Mrs K R. “I think that joke is damaged.”

A drink with history is always very interesting! As always, beautiful shots, John.

Hi Angie, we love cocktail history! SO interesting. :-) Thanks for the comment.

What a pretty drink!

Hi Anne, it is! Dynamite flavor, too. :-) Thanks for the comment.

Beautiful and sounds delicious too!

Hi Martha, this has lovely flavor -- a real keeper. Thanks for the comment.

Cherry is my favorite and that brandied cherry garnish would definitely not be optional for me.

Hi Pat and Dahn, brandied cherries are wonderful. Great flavor. :-) Thanks for the comment.

Rye whiskey is my favorite. Bookmarking this one!

John, you're right about the questionable nature of the ship explosion as a reason to go to war. Add to that the fact that publishing magnate had the artist Frederick Remington stationed there to supply images of the alleged building tension. At some point, Remington wrote to him, saying, “Everything is quiet. There is no trouble. There will be no war. I wish to return.” Hearst sent back a note: “Please remain. You furnish the pictures and I’ll furnish the war.” Then the Maine exploded, Remington "furnished" a memorable painting, and we went to war.

All that said, this is a delicious sounding cocktail. And I love the strange history supplied by the maker!

Hi Terry, thanks for the info about Remington. I had actually read that quite a long time ago, but had forgotten all about it. Thanks for the comment.

Cherry Heering used to be one of our favorite after-dinner drinks, but we somehow got out of the habit of keeping liqueurs on hand. I think that was a mistake. Anyway it was so long ago that when I see the prices now I go into deep sticker shock.

Hi Mae, Cherry Heering is a terrific after-dinner drink. Dessert in a glass. :-) Thanks for the comment.

Now this is a cocktail with an interesting story. Delicious too I bet. GREG

Hi Greg, it's really good -- definitely worth trying. :-) Thanks for the comment.

Always fun learning a little history about how a drink came into existence. Beautiful dark golden color. Thinking we will take your advice and try it over ice. Maybe as we call it a single "ball of awesomeness" ice cube, so it does not water down the drink. Stay well and take care

This is an interesting cocktail. Love to read the history. I love your pictures.

Hi Bobbi, I like those big ice cubes! And I keep going back and forth whether I like this better straight up, or on the rocks. :-) Thanks for the comment.

Hi Dawn, cocktail history can be a lot of fun. :-) Thanks for the comment.

I always learn something new with your cocktail post, that is why every since I first stumbled upon your site everytime I order a cocktail, I am well informed and never look at that cocktail the same again

As always, your photo of this cocktail is fabulous. I don't know if I've had rye. And may have had a sip of absinthe at some point. Anyway, I must try this, sounds like a fun drink.

Hi Raymund, we do enjoy researching cocktails! :-) Thanks for the comment.

Hi Lea Ann, I used to prefer bourbon to rye; nowadays, it's the other way around. Rye isn't as sweet, which I appreciate. Thanks for the comment.

I just love all the stories behind the recipes, and your photos are always wonderful. But I think that top photo is my new fave!

Hi Jean, aw, thanks for those very kind comments! :-)

Hi Abbe, really good drink. :-) Thanks for the comment.

What a great story behind a very sexy looking cocktail! I need to find that cherry liqueur!

Hi Laura, Cherry Heering is worth trying. :-) Thanks for the comment.

I'm always a fan of whiskey and cherry, so this is something that I'd readily try! It's the absinthe that really has my interest piqued, though.

Hi Jeff, the amount of absinthe is small, but the background flavor it adds is large. :-) Thanks for the comment.

Now this is a cocktail that I could sink my teeth into. I LOVE anything with cherries or a cherry flavor. Just the color of the cocktail makes gives me a craving for cherries. Wish I could still drink alcohol. I'd have a couple of these ASAP. You're too tempting John.

Hi MJ,yeah, we ARE too tempting. :-) Thanks for the comment.

Cherry and absinthe is such a good combination. Cheers!

Any cocktail that comes garnished with a cherry on top is all right by me. Second best only to a sundae. ;)

this drink certainly sounds interesting. i do love cherry liqueur tho i have a bottle of a local one distilled on a mountain :)
cheers!

Hi Sherry, cherry liqueur distilled on a mountain sounds lovely. :-) Thanks for the comment.

Another elegant and delicious cocktail! Never tried this one, but I bet it's really good.

Hi Ben, it IS really good. :-) Thanks for the comment.

These photos are stunning! And all different--kudos! Oh and nice cocktail too :)

Hi Inger, really nice cocktail. :-) Thanks for the comment.

Mmmmm, I want one of these right now! John, have you ever tasted Luxardo Cherries? OMG, like the mercedes benz of maraschino cherries. I could drink the syrup alone. They'd be awesome in this cocktail. Cheers!

Hey I’m not very good at history, because it’s hard to remember so many facts. However, I know I would remember a drink like this! What an interesting combination of flavors. I don’t think I’ve heard of anything like it…

Hi David, the inclusion of Heering Cherry combined with absinthe certainly sounds odd, but it works. :-) Thanks for the comment.