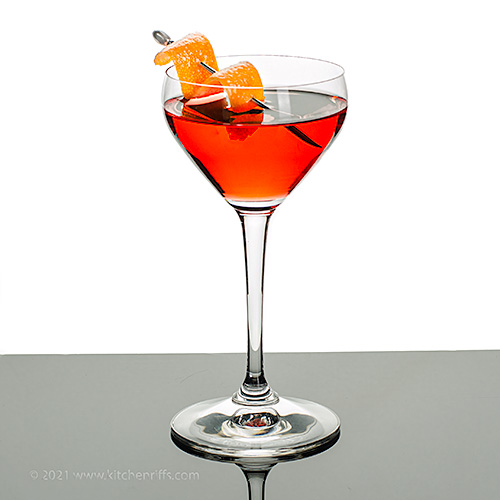 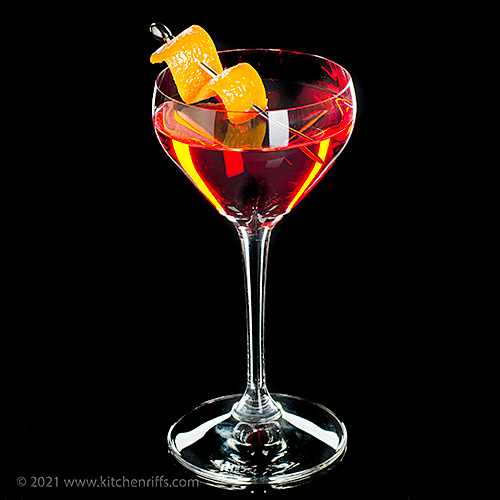 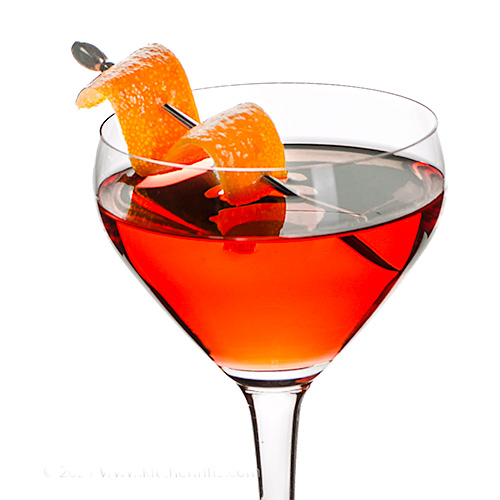 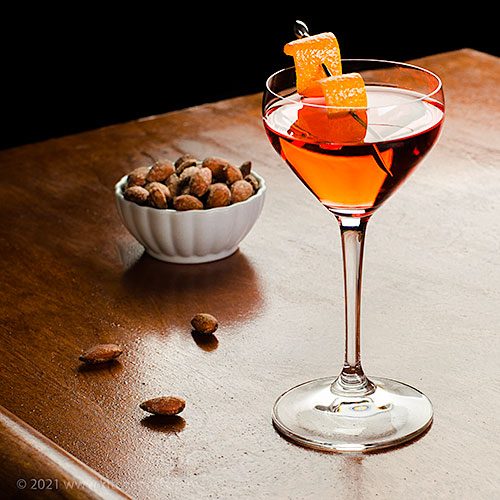 Once again, I love the puns!
This drink is a feast for the eyes and sounds perfectly wonderful!
Now I can look forward to your summer cocktails every other week, I have a screened porch and rocking chair ready for some summer sipping!

Hi Anne, this ending kind of wrote itself. :-) Thanks for the comment.

It sure looks and sounds delicious. I'm looking forward to your Summer Sippin’ and Snarfin’ Series. We love having a nice cocktail or two on summer evenings.

Hi Martha, we always enjoy selecting the cocktails for that series. Have some fun food recipes coming, too! :-) Thanks for the comment.

Yes, perfect for sipping during the Olympics. My life goal is to make twists as beautiful as yours!!

Hi Liz, this is the easiest garnish to make -- the cocktail pick helps preserve the shape of the twist. :-) Thanks for the comment.

Campari and Cointreau together, how delicious! I agree with Liz, do you think one day you can do a post on how to do garnishes for drinks or do you have one in the archives? Stay well and take care

Hi Bobbi, it's a great combo! And we actually do have a mini lesson for making twists, in the Notes on our post for the Martinez Cocktail (http://www.kitchenriffs.com/2016/07/the-martinez-cocktail.html). Enjoy! :-) Thanks for the comment.

Hi Dahn and Pat, wait until you taste this -- terrific flavor. :-) Thanks for the comment.

You make the BEST cocktails, John. This looks so beautiful and tempting with your photography. As always, I enjoy reading the conversations/flirts between you and Mrs. Kitchen Riffs. You two are such a cute couple.

Hi Angie, don't know about me, but Mrs KR definitely IS cute! :-) Thanks for the comment.

You are right: time for summer drinks now that we can mingle with our friends and relations. My repertoire is pretty limited, though, as we mostly go for wine.

You do manage to work some obscure history into the drink recipes.

Hi Mae, it's amazing how many drinks are out there! We thought we'd have run out of drinks long ago, but we keep finding more and more interesting ones. :-) Thanks for the comment.

love your puns! what a man was Shakespeare! how on earth did he come up with all that stuff?:) love your photos; love your drink. take care!

Looks like a drink that definitely should be brought back. A nice sipper.

Hi Sherry, Shakespeare is wonderful, isn't he? Bet he would approve of this drink. :-) Thanks for the comment.

Oh another fabulous cocktail, so elegant and delightful. Stunning photos (as always!) John, I solemnly pronounce you the kind of the fancy cocktails :)

Sippin' and Snarfin'- love it! Can't wait to view your up-comin' Summer recipes!

Hi Fran, we can't wait either! :-) Thanks for the comment.

Another gorgeous cocktail! My husband has been wanting to try more cocktails with gin.

Hi Laura, isn't this pretty? And good thing we have loads of gin cocktails on our blog. :-) Thanks for the comment.

What a beauty! I'm sure it's tasty too.

Hi Pam, this really has quite nice flavor. :-) Thanks for the comment.

This is almost too good looking to drink!

Hi Ashley, with "almost" being the operative word! :-) Thanks for the comment.

Such a sexy cocktail!

It seems quite a bit strong cocktail for my taste by I wish these were more common in bars. I like these retro cocktails :)

Hi FT, its flavor really is a bit in-your-face, but really pleasing. :-) Thanks for the comment.

Oh Lucien! It's diabolically red allure made me read Lucifer. I'll have to give this one a try. After all, I can always say the devil made me do it. GREG

Hi Greg, we know the devil all too well, alas. :-) Thanks for the comment.

Apart from your usual beautiful photography, the second photo has some similar reflections to actual fencing! Well done. The combo sounds lovely, perfect for a summer tipple.
Eva http://kitcheninspirations.wordpress.com/

Hi Eva, reflections in drinks can be so much fun! :-) Thanks for the comment.

What an interesting combination of ingredients in this drink. I wonder if maybe someday someone will name a drink after me? Probably, it will have Kool-Aid in it. Gorgeous glass, too, btw. Looking forward to the Olympics!

Hi Jeff, we should all have drinks named after us! :-) Thanks for the comment.

How fascinating to learn about this cocktail and its homage to a fencing star. A good friend's daughter is already blazing a trail in fencing. She's still in high school, so a few years away yet from being of drinking age. When she is, I'll have to tell her to enjoy one of these.

Hi Carolyn, this will be a fun drink for her when the time is appropriate. :-) Thanks for the comment.

Amazing combination of flavors in this, John! This morning, as I bought Grand Marnier, I thought about using Cointreau instead. Silly me… I will get Cointreau next time and they will have everything to make us.

Hi David, we sometimes substitute Grand Marnier for Cointreau, but there really is enough difference that we always have both on hand. Seems a bit silly because their flavors aren't that far apart, but I guess we're silly. :-) Thanks for the comment.

The sport of fencing is always intriguing to those of us afraid of sharp objects. I think I'll stick (get it-stick) with this drink!

Definitely making this for the summer games. How fun! And it's so nice to have new delicious cocktail drinks as we all start to entertain again. Love it. :-) ~Valentina

Hi Valentina, we've had a couple of dinner parties since we've been vaccinated -- SO nice! :-) Thanks for the comment.

Good drink and good puns too! Have to give this one a try. Thanks, John!

Fencing is an elegant sport, deserving of such an elegant drink. Now I'll know what to sip during the Olympic games.
Amalia
xo

Hi Amalia, fencing is really interesting, isn't it? And this is such an interesting drink. :-) Thanks for the comment.

I was already excited for the Olympics, and now with this drink in hand, even more so. Cointreau and Campari sound like a delightful combination.

Hi Laura, they really are a neat combo. :-) Thanks for the comment.

Hopefully that coming olympic pushes on and wishing that it would be safe for everyone. Regardless whether it goes or not, this drink is perfect on any occassion