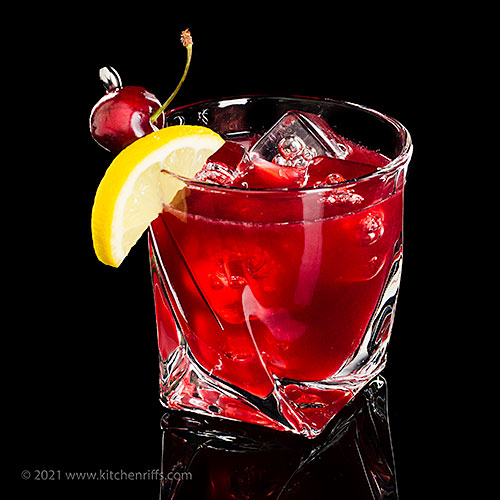 A riff on a drink made by Martha Washington

Cherry bounce dates back at least to 17th century England – and was quite popular in colonial America. In fact, Martha Washington made a big batch every year (we provide her recipe in the Notes).

Made the traditional way, cherry bounce takes a few months to age and mature. But we can’t wait that long. So we’re offering a cocktail version that’s much faster and easier to make, while still dispensing great flavor.

Martha (and George) would approve. Classic cherry bounce is made by infusing a mix of cherries, sugar, and spices with a spirit. Brandy has long been the traditional liquor, but rum and whiskey are common too.

Our cocktail doesn’t use traditionally made cherry bounce (although we provide a recipe for this in the Notes). Instead, we use cherry syrup (recipe in the Notes) and then combine that with other ingredients.

We’re using a cocktail recipe developed by Eric Felten (one that he published in the Wall Street Journal years ago).

This recipe calls for allspice dram (aka pimento dram). This is an allspice liqueur that has spicy, zesty flavor. You can omit it if you don’t have any on hand (we bought some just to make this drink), but it does add a lot of flavor. Over the next year or so, we’ll be using this ingredient in some other drinks, so it won’t go to waste.

Assuming you have cherry syrup on hand (which takes about an hour to make), this recipe takes about 5 minutes to prepare. It serves 1. 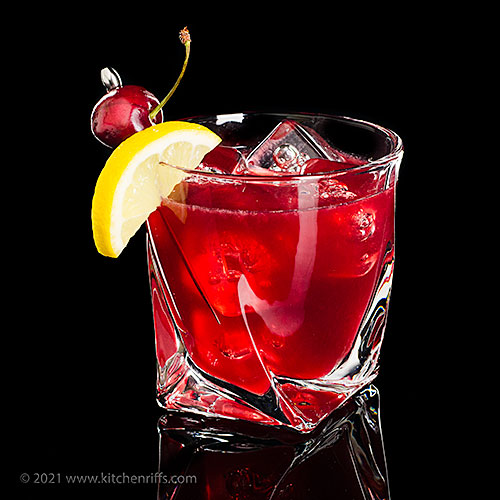 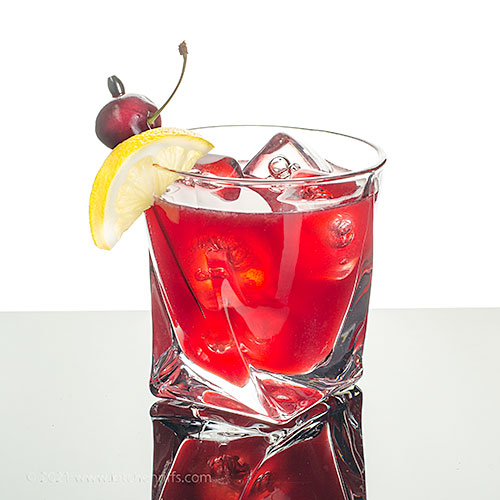 “Indeed,” I said. “That allspice dram is cherry good stuff.”

“Maybe I need a few more quarts of brandy,” I said. “To channel Martha Washington.”

Too bad he cut down the cherry tree.

I love the color and the name of the drink. Perfect timing too, as I received a box of okanagan cherries from a friend.

Gosh, that colour!! I am in love :-) The photo with dark background looks seriously good, John.

Hi Balvinder, the color is fantastic, isn't it? Great flavor, too. :-) Thanks for the comment.

Hi Angie, we love the color too! Thanks for that very kind comment. :-)

What a gorgeous cocktail to celebrate the cherry season. Ayahhh...google! Always something to inconvenience everyone, including our readers. Don't worry we will always be following you. Do you know we have been following you since 2011! This year is our 10 years celebration of being blog buddies.

Hi Bobbi, you were one of our earliest blog buddies! We :heart: you! :-) Thanks for the comment.

This just might be my favorite, I love cherries and boy do we have a lot right now!

Hi Pat and Dahn, we saved this recipe for cherry season! :-) Thanks for the comment.

my husband loves cherry and will go crazy for this!

Hi Ashley, crazy can be good! :-) Thanks for the comment.

Recently I've been reading about the culinary culture that came from Africa with enslaved people and then became part of the southern food traditions -- especially the Netflix special "High on the Hog" and several books. Martha and George Washington had two enslaved cooks: one named Doll, the other named Hercules, who were both very creative and skilled (long story) -- and Martha Washington's recipes are very well known as well, and maybe owed something to the people who actually made the food. Further, red drinks were a tradition in Africa -- still popular in the American Black traditions.

SO I wonder if this red beverage is connected to all these other traditions. Complicated.

Hi Mae, yup, most of Martha Washington's recipes were probably made by someone else. Doubt if cherry bounce came from Africa -- it was known in England since before 1700, possibly since before 1600. But interesting thought! Thanks for the comment.

What a pretty drink and it sure sounds delicious too!

Hi Martha, it really does have nice flavor. :-) Thanks for the comment.

Hi Abbe, I don't know MailerLite -- should check that one out. :-) Thanks for the comment.

KR, yes please I would love one of these cocktails.I wish cherries were economical enough in our part of the world to make the syrup etc. RE the email service, how disruptive has this been? This last week, I have managed to change over to Follow.it, pretty stressful at times, but the staff at follow.it have been so helpful and I learned a lot. I am considering starting a Facebook HRK blog site, as Facebook have locked me out of my personal account with no explanation. Does your blog run off Wordpress, but is actually based on Google blogger? Just wondering if that is the case, is it worth changing over to Wordpress? Anyway good luck with your email service. I'll try to keep following you. Thanks so much for your inspirational recipes and blogger support. Cheers, Pauline

Hi Pauline, I'm on Blogger -- and it's becoming such a pain. :-( I'm looking at Follow.it -- that may be the one I move to, although I'm heard mixed things about it (more good than bad, though). We'll see!

Hi Pauline, we love those endings! :-) Thanks for the comment.

ooh cherry syrup - sounds delish. I went to Follow.it for email as has pauline and others. i don't know what the result will be but so far okay. hubby said he got an email today for my latest post. so here's hoping all goes well. as pauline said, cherries here are not cheap - a short growing season and only in the cold parts of australia so ... Follow.it were very helpful and actually did everything for me - even migrated my mailing list so phew that was great. good luck with it.

Well — I, for one, will be making the Cherry Bounce (your reduced version). I make raspberry bounce every year, and it’s lovely. I am fascinated by the allspice dram — I need to find some!

Ahh, the ****** FeedBurner issue. I went with a new service and it looks pretty good. But we shall see on Saturday. Assuming you get my notification on Saturday, feel free to reach out if you like it. I hope you do find an email service… but I will at least see your posts on FB!

Hi David, I'll be looking forward to seeing what email service you selected! And you should look forward to getting allspice dram -- it's really enticing stuff. :-) Thanks for the comment.

What a beautiful cocktail. I just found directions for making an allspice dram so I am adding that to my to do list this week, along with making cherry syrup.

Hi Anne, we've never made allspice dram, although the recipes we've seen for it look pretty easy. We're lazy when it comes to things like that, so we just buy it. :-) Thanks for the comment.

Cherry good stuff indeed! Such a gorgeous drink and I enjoyed learning about the original Cherry bounce! On another note Bummer about Feedburner - like y'all I haven't been too satisfied with other options either! Cheeers to a cherry weekend!

Hi Shashi, yup, it's going to be a cherry weekend! :-) Thanks for the comment.

Doesn't everyone have some allspice liqueur on hand? LOL. I absolutely love cherries and cherry anything so I know that I'd love this cocktail. That cherry bounce has also caught my interest (your reduced recipe). Sounds like something I could add some sparkling water to for a refreshing afternoon drink. A very interesting and enjoyable post John.

Hi MJ, LOL re allspice dram! There are so many ways you can play with this -- nice to experiment. :-) Thanks for the comment.

Such a pretty drink!!!

Hi Pam, really great flavor, too. :-) Thanks for the comment.

What a wonderful flavour combination! I also think that sour cherry syrup would be nice here even though it's not so easy to find them. And I must admit the photos and the light are spectacular; excellent game of the glass shape and the ice cubes!

Hi Ben, sour cherries would actually be ideal in this. But, as you say, they're not all that easy to find, alas. Thanks for the comment.

I love the color and the sound of this cocktail.. I also enjoyed reading its history. cheers!

Hi Judee, isn't the color fabulous? Flavor, too. :-) Thanks for the comment.

What a beautiful cocktail. Now is the time when I wish I still had our New Hampshire orchard. We had three large sour cherry trees that would have been fun to use in your downsized version,

Hi Karen, with all those trees, you might have wanted to make Martha Washington's version. :-) Thanks for the comment.

This is a beautiful drink, John. I'm love fresh cherries and this cocktail will be a new way to celebrate the season. 💕🍒 I use MailChimp and I've been happy with it for a year now, it's too bad they are cancelling FeedBurner without giving bloggers an alternative. I'll still be reading, my friend!

Hi Marcelle, great way to celebrate cherries, isn't it? Thanks for the comment.

The name roped me in immediately. It's just so darn cute sounding. But the color definitely sold me. A real beauty of a cocktail.

Hi Carolyn, yeah, that name is pretty neat. :-) Thanks for the comment.

I'm a sucker for a pretty cocktail, and this one isn't just pretty, it's GORGEOUS!!!

Hi Liz, it really does look rather nice, doesn't it? :-) Thanks for the comment.

Ohhh I love the colours and flavour on this one

Ugh, email subscriptions are kind of a pain. I'm all about social media and bloglovin. And I'm all about this cocktail. But it would be fun to make it the traditional way too.

Hi Laura, social media is where it's at these days. Alas, I'm just not a fan of it, though I do use it a bit. Thanks for the comment.,

I actually always have cherry syrup on hand :)

Okanagan cherries? Lucky you! They are lovely.
-Carol S-B