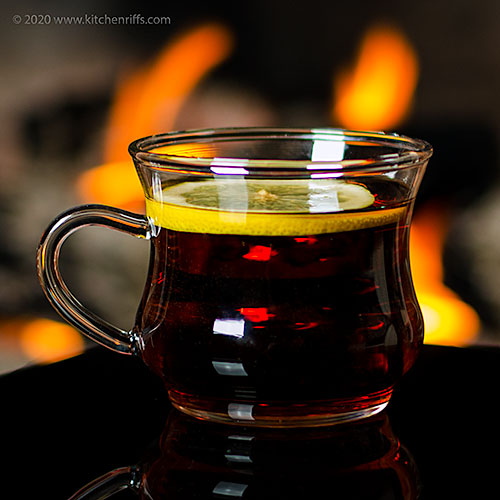 January means serious cold in our part of the world. Time to warm up!

And what’s more warming than a Hot Toddy? It combines the firewater of your choice (we prefer rum, but any brown liquor works) with a bit of sugar and boiling water. The result is a smooth sipper that will chase the chill away.

Oh, and if you’re unlucky enough to have a cold? The Hot Toddy will make you feel loads better.

Just what the doctor ordered. 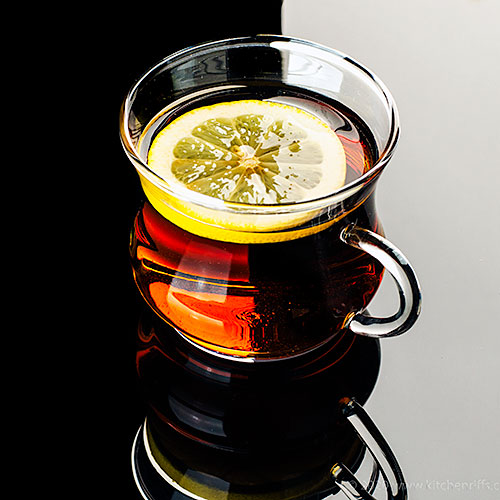 The Hot Toddy is an old drink, probably dating back to the 1700s. It most likely originated in Scotland and featured smoky Scotch whisky.

Some still like to make it that way. Although rum and bourbon are now the spirits most commonly used for Hot Toddies in the US, cocktail historian extraordinaire David Wondrich recommends using a not-too-expensive single malt Scotch.

Our recipe (which we’ve adapted from Wondrich) takes about 5 minutes to prepare and serves one. 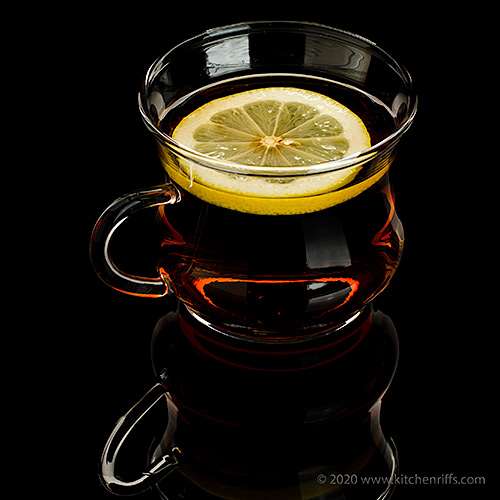 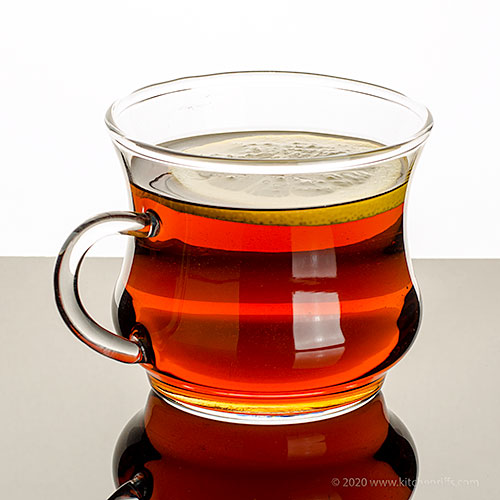 “Speaking of which,” said Mrs K R. “We should put winter on ice and escape to someplace warmer.”

“Indeed it is,” said Mrs K R. “In fact, we’re planning to leave in less than two weeks. But first, we should have one more of these.”

In Germany this drink is called Grog. Prost!

Hi Pam, this is incredibly warming -- and very soothing. :-) Thanks for the comment.

At the moment I’m in sunny Florida, but will soon be back in Michigan where this is a necessary evil!

Hi Mae, we're headed to warmer climes in a couple of weeks, too. In the meantime, we're be drinking these to cope with the cold. :-) Thanks for the comment.

I am headed to the kitchen to make myself one right now. Seriously. I came back from México with a cold and, as you say, this is just what the doctor ordered! I’m using scotch. Or maybe dark rum. Or maybe one now and one later.

Wherever you go I hope it requires some splishy splashy fancy pineapple drink and not a hot toddy. Though I could use any of these right now!

Hi David, all too easy to get sick when traveling, alas. A couple of these will set you right -- or at least you'll feel better. I'd try first the Scotch, then the rum. Just to see which you prefer, you know. :-) Thanks for the comment.

Hi Abbe, much more pineapple than toddy. But we'll have some toddies to brace ourselves for the plane trip. :-) Thanks for the comment.

Very nice I've heard of this cocktail but you've described the mix perfectly, of course so I'm tempted to create one, on Friday night.

Hi Merryn, we love to tempt our readers. :-) Thanks for the comment.

John - my apologies but I have to disagree. This hot tonic does stem from the 18th century Great Britain where neither then or now such drinks as 'cocktails' are part of the lexicon. Basically rum has been the alcohol in use tho' whisky toddy is drunk there and in the 'Colonies' as here . . . David: try rum and it will work . . sorry . . .

Hi Eha, historically you're right: This isn't a "cocktail." Cocktails were morning drinks, probably invented in the US, and were quite small drinks. But today language has evolved so we tend to call any mixed drink a "cocktail." (And we deliberately used cocktail in our title because there's a coffee drink -- without booze -- called the "toddy".) Wondering about your thought that "cocktail" aren't part of the British lexicon, though. Maybe the most famous cocktail book of all time -- _The Savoy Cocktail Book_ was published in the 1930s by the head bartender at London's Savoy Hotel. Or maybe I'm misunderstanding you? At any rate, we both agree that rum is the best liquor to use in this drink! Thanks for the comment.

*big smile* Not arguing just stating facts as I know them. Mr Google actually puts the word into late 19th century Louisiana ? I AM talking of the present day. Life actually has allowed me to take part of Australian and British 'society' events for most of my life . . . shall we say all around me would stop and stare methinks if I asked for a 'cocktail' and ask me from what part of the US I came - fact seen on the sidelines dozens of times . . .

Hi Eha, cocktail history is fascinating, isn't it? As is word history. So much to discuss. :-)

It's in the teens here and I sure could use one of these!

Great to see you posting after the holidays. Hope you had a fantastic break. Happy New Year! And cheers to a warm cocktail ;)

Hi Ashley, this will warm you up! :-) Thanks for the comment.

And that is exactly what I did... scotch then rum... and I used honey with the rum. And I really DID feel better. Thanks M

Hi David, glad these made you feel better. :-)

Yum this does sound tasty and comforting. My kind of drink.

It would be really nice holding and enjoying one at this time of the year...gorgeous shots, John!

John, this is a classic libation indeed and like you said, it's a great warming drink and a popular one here when the snow flies. Jameson's hot toddy is most often served at bars around these parts. But long before the Jameson's version became popular we had (and still have) Rödvinstoddy (red wine toddy).
FYI, cocktailing (same word in Swedish) is hugely popular over this way with the younger crowd.

Lately I just can't get warm so I think I'll have to try this. If I pretend I have a cold, is it OK to have a Hot Toddy for breakfast? :)

Hi Vicki, our kind of drink, too! :-) Thanks for the comment.

Hi Ron, cocktails have become really popular in most places in the last 15 years or so, or so it seems. And I do like Irish whiskey in this. And I've had red-wine versions of this -- which is what mulled wine is -- kinda, sorta ;-) Thanks for the comment.

Hi Kelsie, better yet, have one for breakfast to prevent a cold! :-) Thanks for the comment.

I'm 'shivering' here in the cold San Diego winter and feel like having one of these drinks (I'm afraid to use the word 'cocktail' after reading some of the remarks above)! BTW, I recently made for the second time your Baked Jalapeno dip recipe- it's a real winner!

I love this post, John! We always joke about giving the kids a "hot toddy" when we can't get them to sleep LOL Turns out this not a drink for little ones to take at all, but mommy and daddy could sure use one :) I think bourbon and brown sugar sounds perfect with this! Temps are supposed to drop here this weekend so, bookmarked!!

Hi Marcelle, definitely not a drink for the little ones! :-) Thanks for the comment.

Hot Toddyis more than just a beverage with a funny name. I associate it with the ski lodges of my youth. Hot toddies and ski lodges are indeed a good combination. But more likely, when winter rolls around, I consider the hot toddy as the original nighttime sniffling sneezing coughing aching stuffy head fever so you can rest medicine. GREG

Hi Greg, this is a terrific nighttime sniffling sneezing coughing aching stuffy head fever so you can rest medicine! :-) Thanks for the comment.

Perfect timing! Tonight's movie night next to a roaming fire. What's better to go with that than this hot toddy! Thanks Johns!

Hi MJ, this drink goes well with roaring fires! :-) Plus it's a slow sipper -- perfect for movies. Thanks for the comment.

This cocktail should be on our menu for today. Although they (so far) have missed the prediction of 4-6 inches of snow, it is still frigid!!!!! Enjoy the warm vacay!

Hi Debra, we've had a ton of rain the last day, and now it looks as if we'll be getting at least some snow. Time for one of these! :-) Thanks for the comment.

This is what I'll drink when Noel Coward invites me for cocktails.
Amalia
xo

You know comfort food? This is a total comfort sip. ;)

Hi Carolyn, definitely a comfort sip! :-) Thanks for the comment.

I haven't tried making a hot toddy with rum before, I think I will!

I have made a toddy with spiced rum and it's quite good. Never thought of using tea. That sounds interesting.

Hi Caroline, dark rum (or a good amber) is wonderful in a hot toddy! :-) Thanks for the comment.

Hi Jeff, using tea instead of water does add a whole 'nother layer of flavor. Worth trying, although usually I just use hot waster. :-) I really should try spiced rum sometime -- I've been it's good stuff, but we already have so many different rums on hand I'm reluctant to add another bottle to the collection. :-) Thanks for the comment.

It has been a long time since I have had a hot toddy. Sounds like a wonderful way to warm up with all the cold weather.

Hi Dawn, a terrific way to warm up! :-) Thanks for the comment.

I did make this for our fire and a movie and loved it. Normally I use bourbon for toddy's but I tried the dark rum as you suggested and now I think I like rum in my hot toddy rather than bourbon. Thanks!

Hi MJ, we do like bourbon in a toddy, but think dark rum makes a better drink. Glad you liked this!

Such glorious photos! Such a glorious drink!

Hi Emma, one of the best winter drinks we know. :-) Thanks for the comment.