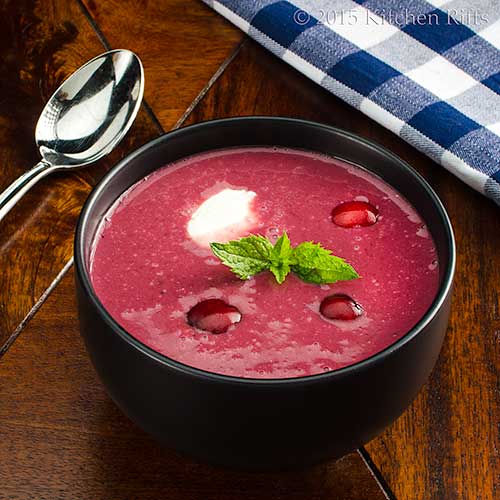 Chilled fruit soups are popular in Central and Eastern Europe. One of the best known is Hungarian meggyleves (Cold Sour Cherry Soup). It’s traditionally made from sour cherries, cream, and sweet white wine (in Hungary, that often means Tokaji).

Here in the US, it can be hard to find fresh sour cherries. But sweet Bing cherries are in season now—and abundantly available. So we use them instead of sour cherries in our recipe. And to avoid making the soup too sweet, we replace Tokaji with a drier red wine.

The result? A refreshing summer starter with outstanding flavor. And one that can provide a fun change of pace at your next dinner party—especially since this is a dish that many people are not familiar with.

Your guests are sure to be impressed. So start practicing a modest bow. You’ll want to be prepared for their accolades. 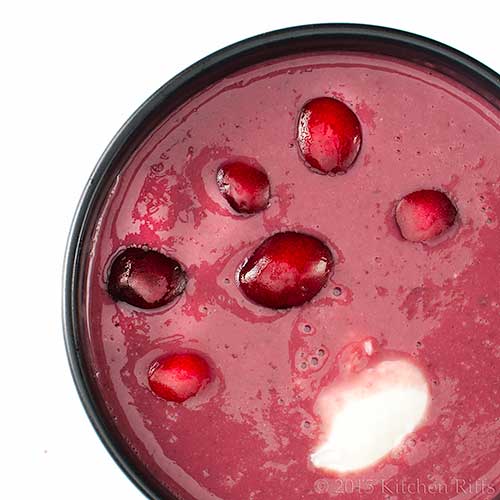 Years ago, we had an authentic recipe for this soup (one that required sour cherries and Tokaji wine). We made it several times—but then we lost the recipe. Bummer. So we were forced to rethink this dish, and came up with a new version.

Which turned out to be a good thing, because this recipe is actually better than the one we remember. It’s not “authentic,” though, so we call it Hungarian-Style.

The hardest part of preparing this dish is pitting the fresh cherries. You could also try making it with frozen cherries (which often are pre-pitted). We haven’t tried making it that way, but suspect it would work just fine.

Prep time (including the cherry pitting) is about 15 minutes. Cooking time adds another 10 minutes or so. And you want to make this soup a couple hours ahead of time so it has time to chill properly. (It’s actually pretty good warm, too, though we don’t serve it that way).

This recipe serves 6 as a first course. 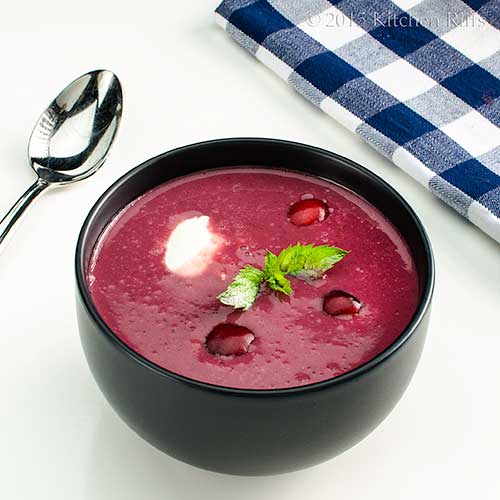 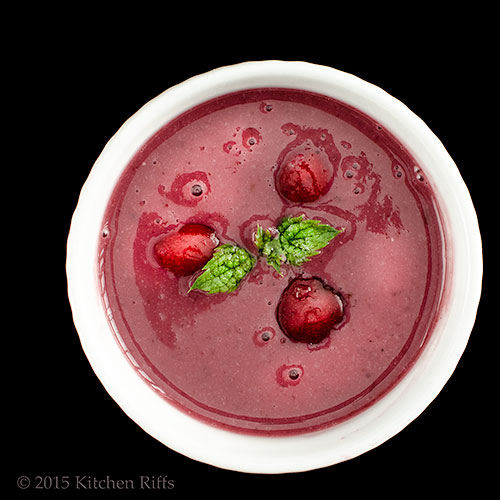 “Love this!” said Mrs. Kitchen Riffs. “I remember the first time we had cold cherry soup.”

“Me too,” I said. “We were in Boston, and had dinner at the late, lamented Café Budapest. It was one of their house specialties.”

“Then of course we were inspired to make our own,” said Mrs K R.

“Still don’t know how we lost that recipe,” I said. “Kind of glad we did, though. That soup was good, but this version is the best I’ve ever tasted.”

This time, without the pits.