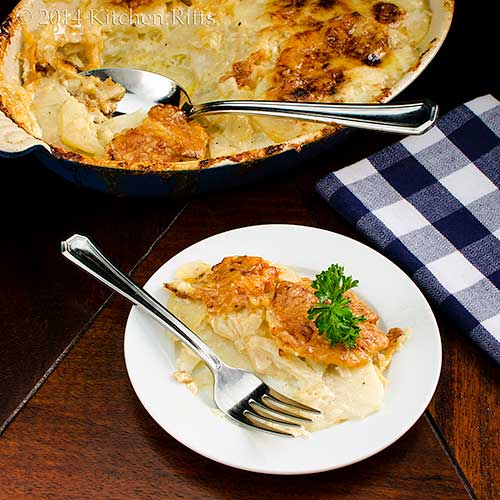 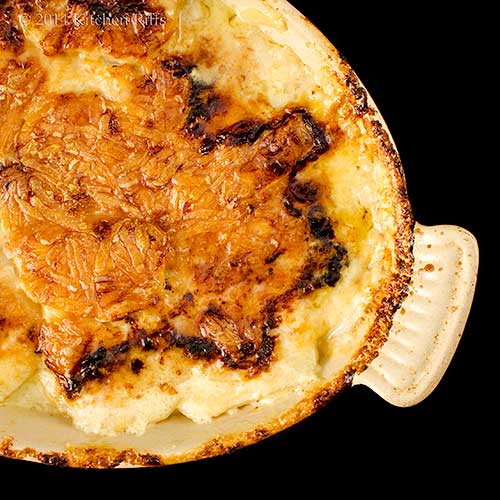 You can omit the potato entirely and just use celery root (celeriac) in this dish. But celery root tends to be pricey in the US (where it’s not widely used). Besides, the flavors of celery root and potato marry beautifully. So I often combine them just because they bring out the best in each other.

For a gratin like this one, my basic rule of thumb is to use a cup of liquid (cream, half-and-half, or milk) and 4 or 5 ounces of grated cheese for every pound of potatoes/celery root. You can vary these amounts a bit—this is a pretty forgiving recipe—but this formula always works well for me. It’s the same ratio we used when making the Gratin Dauphinois that we discussed a couple of years ago.

This recipe makes enough to fill a gratin dish that measures about 8 x 11 inches (13 inches with handles) and that holds about 7 cups of liquid. This will be enough for 6 to 8 servings. But your guests will want seconds, so you if you’re feeding a crowd, you really might want to double the recipe. In that case, use a casserole that measures about 9 x 13 inches (a Pyrex dish is ideal).

Prep time for this recipe is about 15 minutes (it could be 5 minutes more or less depending on how quickly you work). Then add another hour or so (mostly unattended) for baking time.

Leftovers keep well for a few days if refrigerated in an air-tight container. 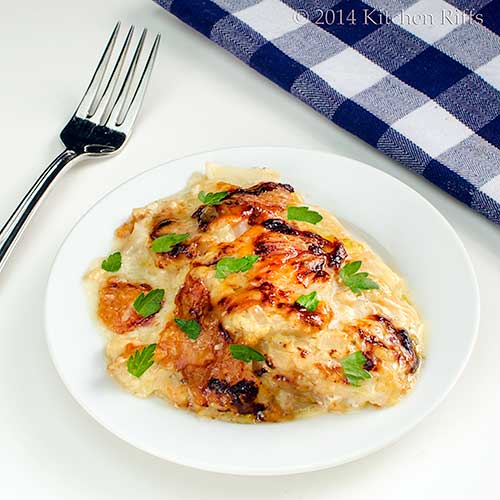 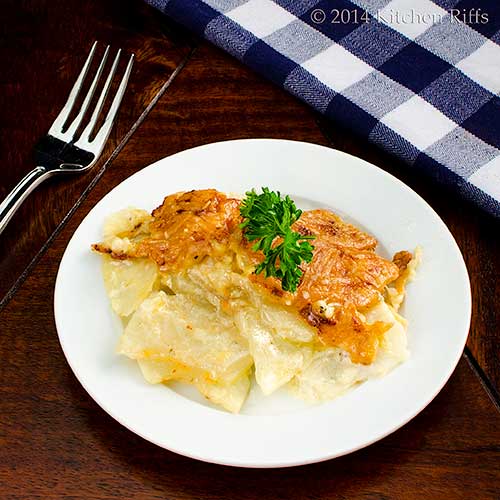 “Wowzer,” said Mrs. Kitchen Riffs, taking a bite. “I thought your Gratin Dauphinois couldn’t be beat, but this is even better.”

“The celeriac bumps up the flavor,” I said. “It somehow makes the potatoes taste even more potato-y.”

“Yes, and the Dijon mustard adds intrigue too,” said Mrs K R. “The flavor is really subtle, but you know something is going on.”

“Mustard and celery root make such a natural combo,” I said. “Remember, we used mustard in the dressing for the Celery Root Rémoulade we posted about in February."

“Another wonderful dish,” said Mrs K R. “One of the best you’ve done all year. And one that would fit well with Easter menus, too.”

“It’s a shame that celeriac doesn’t get the love it deserves,” I said. “Maybe because it grows underground.”

“It also looks like a cross between a rock and a giant turnip,” said Mrs K R.

“True, but beauty isn’t everything,” I said. “Maybe it just needs a good PR agent. One who can come up with a memorable tag line for it.”

“Hey, I’ve got it: The Undercover Veggie—Taking Celery Back to its Roots," said Mrs K R.

You’ll be glad to hear that Mrs K R has no plans to start a PR firm anytime soon.

You may also enjoy reading about:
Gratin Dauphinois
Celery Root (Celeriac) Rémoulade
Braised Celery with Tomato and Parmesan
Italian Celery and Mushroom Salad
Roast Asparagus
Hollandaise Sauce
Or check out the index for more recipes
Posted by Kitchen Riffs at 9:15 AM