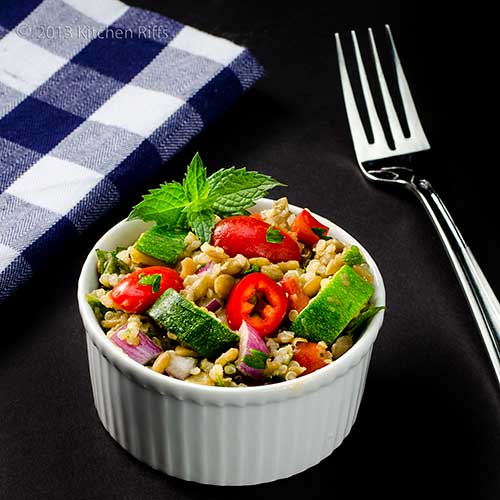 This healthy, protein-rich vegan dish can be a main or a side

In much of the world, September brings in-between weather. Here in the Northern Hemisphere, we’re anticipating cooler temps, but we’re still seeing many warm (as in hot!) days. In the Southern Hemisphere, people are looking forward to warm weather, though the cold may still linger a while.

So planning meals can be a bit of a challenge, wherever you are. Warm temperatures call for something light. But that hint of chill makes you crave something with a bit of substance.

For weather like this, my go-to is a main course salad—particularly one with dried pulses or legumes. Vegetables keep it light, but pulses/legumes add a bit of oomph (not to mention protein). Mix in some quinoa, and you have a nutritional powerhouse.

Best of all, main-course salads can make a perfect “Meatless Monday” option for those who want to eat vegan or vegetarian at least one night a week. Add some bread and maybe a nice glass of wine, and you’re set—no matter what the weather gods throw at you. 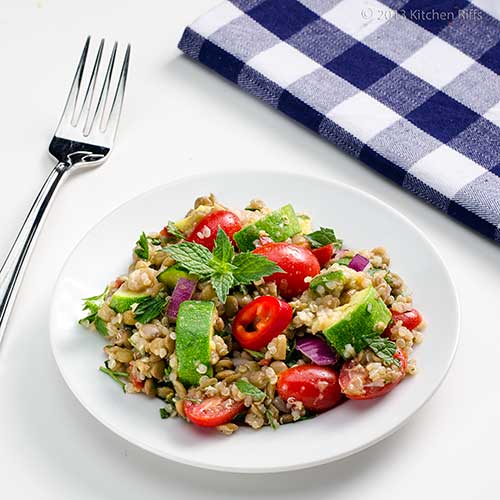 This recipe features zucchini and tomatoes, which are abundant and locally-sourced in many US markets right now. But like he Summer White Bean and Quinoa Salad we discussed back in July, this is a dish you can change to accommodate whatever ingredients you have on hand. Rice or pasta could replace quinoa, for example. And you can substitute almost any vegetable that looks good in your market.

I’d keep the lentils, though. They have such great flavor—and work so well in this salad—that I wouldn’t substitute for them. Besides, it’s always great to find a new use for lentils. (Many of us eat them only in soups, which is a shame, given their great taste and nutritional value).

The combination of fresh mint and parsley is wonderful, too—so I’d definitely give that a try.

It takes about 45 minutes to make this dish, although if you cook the lentils ahead, you can cut that time in half.

This recipe makes about a quart, which is enough for 4 hearty main-course servings, or about 8 sides. Leftovers keep well for a few days if refrigerated in an airtight container. 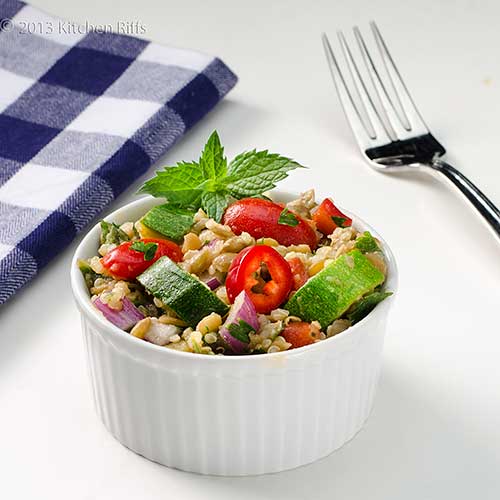 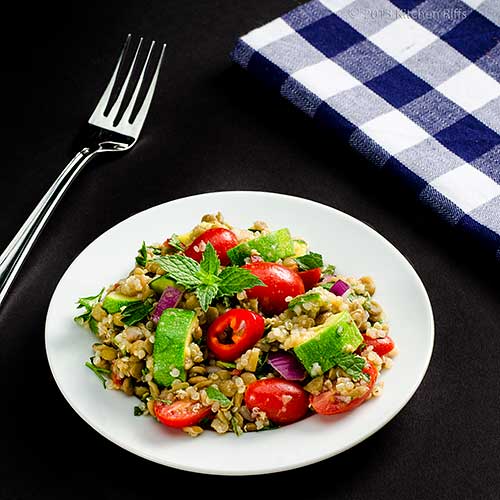 “Usually at least twice a week, and frequently more often,” I said, applying my own fork. “I’m not making a conscious effort to cook vegan or vegetarian, either. It just happens that way. There are so many great-tasting dishes that don’t rely on meat for flavor.”

“Especially ones with lentils,” said Mrs K R. “I love them in dals. Like that terrific Dal with Swiss Chard that uses pink lentils.”

“Or soups,” I agreed. “Way back when we started the blog, one of our earliest posts was on Easy Lentil Soup. And with chilly weather coming, we’re getting into soup season.”

“I can’t wait!” said Mrs K R. “But we still have lots of zucchini and tomatoes. I hope you have plans for them.”

“Absolutely!” I said. “In fact, our next post will feature zucchini pancakes. They make a great light dinner entrée. They do contain eggs and dairy, though, so they’re vegetarian, not vegan.”

You may also enjoy reading about:
Summer White Bean and Quinoa Salad
Dal with Swiss Chard
Easy Lentil Soup
Edamame and Bean Salad
White Bean and Tuna Salad
Summer Pasta Salad
Or check out the index for more recipes
Posted by Kitchen Riffs at 9:15 AM