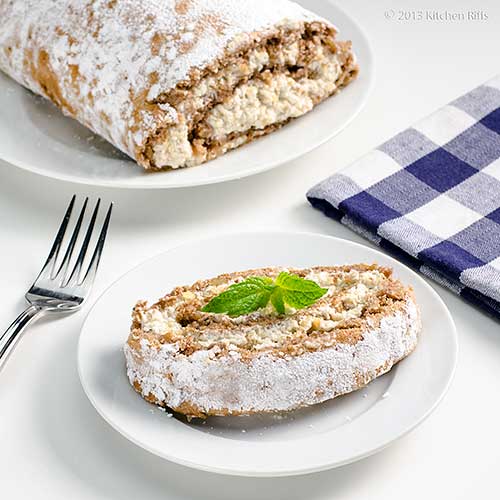 This Gluten-Free Dessert Will Put Your Name in Lights

Need to make dessert for an important dinner?  (Hint:  Mother’s Day is just around the corner!)  One that looks great and tastes even better?

Enter this Walnut Roll Cake.  It’s a time-tested recipe (dating back at least to the 1950s) and it’s not hard to make (though it does take time).  Your guests will rave about the flavor.  And it’s gluten free!

This drop-dead delicious recipe is so good it helped Paula Wolfert shine at one of her first big catering jobs — more about that later — and it will make you a star among your friends.  It will also become the dessert that everyone asks you to make.

Indulge their requests if you can.  After all, we were all little people at one time, weren’t we? 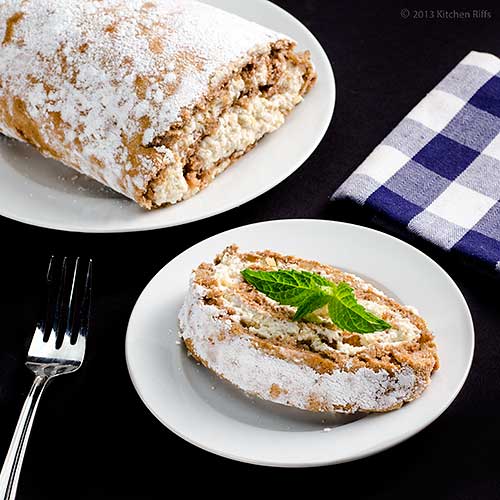 Although this recipe has several steps — and does dirty some cooking utensils — it’s pretty straightforward.  First you make a cake in a half-sheet or jelly roll pan (11 x 17 inches).  Once made, the cake needs to chill for at least 30 minutes.  In the meantime, you make the filling.  Then spread the filling on the chilled cake, roll it, and chill again.  Dust with confectioner’s sugar (and garnish if you like) right before serving.

Because this recipe has a few steps, things will go smoother if you read through the Procedure and Notes a couple of times before you begin.

Mrs. Kitchen Riffs is the baker in our household, and this cake is hers.  She slightly adapted it from a recipe in Paula Wolfert’s World of Food. So when you see “I” in the Procedure and most of the Notes, that’s Mrs K R talking.

This recipe takes about an hour and half from the time you begin until you’ve finished the last step, but part of that time is baking and resting time. Actual hands-on time is 45 minutes to an hour. This recipe serves 8 to 12 (it’s quite rich, so most people will be happy with 1/12). You can make this ahead and freeze for up to 2 weeks before serving.

For the cake:
For the filling:
For the garnish:
Procedure

For the cake:
For the filling:
For final assembly: 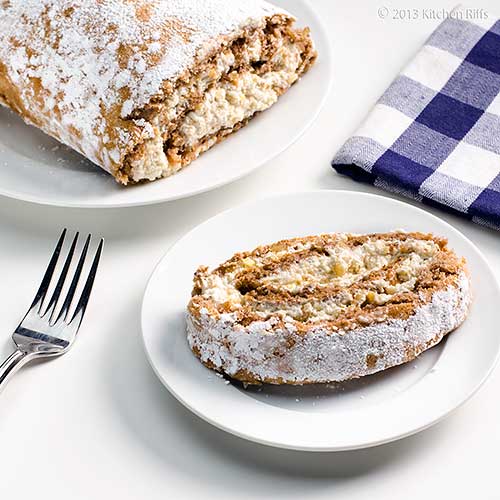 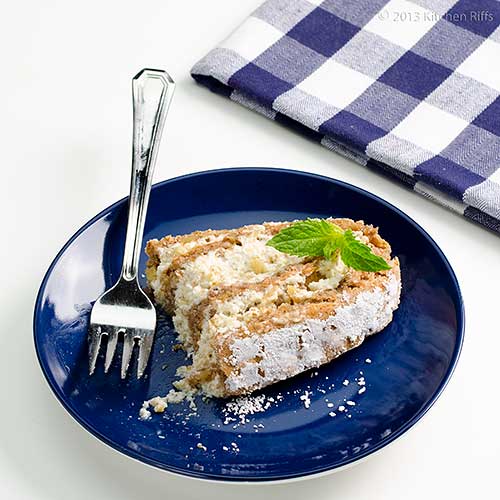 Fit for a Queen (or at Least a Queen Bee)

“I’m only making this one when we have guests,” she replied.  “Or to take to a dinner party.  It makes way too much — and it’s too rich — for just the two of us.”

“It is a big cake,” I admitted.  “Say, remind me of how this helped Paula Wolfert with that catering job.  I’ve read it, but it’s been awhile.”

“She writes about it in the headnote to this recipe in her book, World of Food,” Mrs K R replied.  “It was 1959 and she was fresh off a one-year apprenticeship with Dione Lucas . . . .”

“That’s a name you don’t hear much anymore,” I interrupted.  “She was the first woman to have her own cooking show, I believe.”

“Yes indeed,” said Mrs K R.  “Anyway, after finishing the apprenticeship, Wolfert got in touch with the great James Beard — another name we don’t hear so much anymore — because she was looking for work.  And Beard recommended her for a catering gig.”

“Some rich dowager in Connecticut,” I remembered.  “Wasn’t this a luncheon for like 150 people?”

“Yup,” said Mrs K R.  “And the hostess specified that for dessert she wanted a ‘delicious cake.’  Wolfert wasn’t sure what kind of cake to make, so James Beard gave her this recipe.  She whipped up 15 of these beauties for the luncheon.”

“Right, and took them with her on the train from New York to Stamford,” I said.  “It’s coming back to me.  And wasn’t the dowager shocked at how young Wolfert was?”

“Correct,” said Mrs K R.  “Because Paula Wolfert wasn’t yet, well, Paula Wolfert.  The hostess was so horrified that she dramatically ‘took to her bed,’ wailing ‘Why have they done this to me?  Sent a child to cook the lunch!’”

“And then Wolfert sent a piece of cake up to the hostess,” I prompted.

“Yes, and after tasting it, the lady decided that maybe Wolfert knew her stuff after all,” said Mrs K R.  “And the luncheon was a big success.”

“How could it not be, with this cake?” I said, looking wistfully at the leftovers.  “<Cough, cough> – I think I’m coming down with something!  Maybe I should take to my bed.”

Mrs K R rolled her eyes heavenward, and cut me another slice.