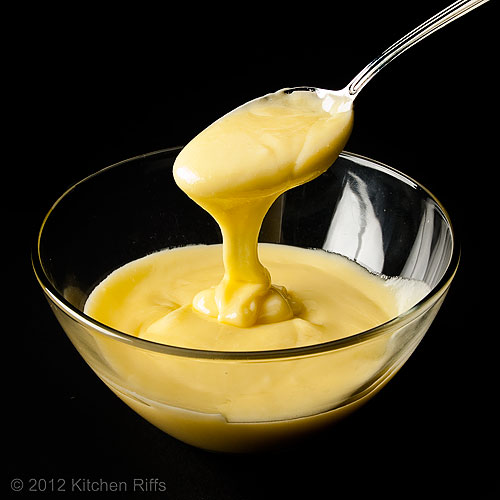 Easy to Make by Hand or Blender

But if you pay attention to just a few details (easy ones), you should have no fear.  And if you do run into problems, almost all are easy to remedy.

Besides, Easter is coming up.  For many people asparagus is an Easter tradition — and what’s asparagus without freshly made Hollandaise?

So promise yourself that this year you’ll learn to make Hollandaise Sauce.  And you’ll have the best Easter meal ever. 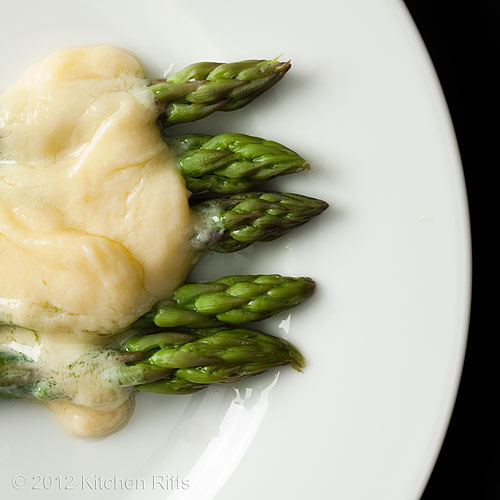 The basics of Hollandaise Sauce are a snap:  Whip egg yolks and lemon juice over heat until the mixture is light and foamy.  Then beat in butter a bit at a time until you’ve formed a thick emulsion.  Finally, season to taste, and serve.

Beating egg yolks with liquid over heat is exactly what we did when we made Zabaglione. So if you made that delicious dessert, you’ve already mastered half the technique of making Hollandaise. The rest is easy — it just involves beating in butter bit by bit. Simple.

The trickiest part of making Hollandaise (or Zabaglione) is to make sure you don’t overheat the egg yolks. Do that and you have scrambled eggs. In the Zabaglione recipe, we beat the egg yolks in a bowl that was set over (but not touching) simmering water. You can also use a double boiler. But with care, it’s easy to make Hollandaise in a pan that’s set directly over medium-low heat. It’s even easier if you have a pan with sloping sides, like a Windsor pan or saucier pan (which is a more useful all around pan).

If you’re careful, you can even use a metal mixing bowl:  Just set it over the heat element or flame of your stove.  But be aware that because the metal is thin, it’s going to heat quickly, speeding up the point where your egg yolks could begin to scramble.

Most home recipes (including mine) call for three egg yolks.  That’s enough to thicken about a pound of butter when making Hollandaise Sauce by hand.  But the sauce is easier to make if you use less butter — and besides, who needs to eat that much butter?  So we’ll use half a pound.  And we’ll use even less when making the Hollandaise Sauce in a blender.  If you use too much, the sauce gets too thick and may clog the blades of the blender (if this happens, you can correct it by adding another egg yolk).

Over the years, I’ve come to like Julia Child’s approach to making Hollandaise Sauce, and my recipe is adapted from The Way to Cook and Mastering the Art of French Cooking, Volume 1. This recipes yields a cup to cup and ½ when making the sauce by hand, or about ¾ cup when making it in the blender. Total preparation time is about 10 minutes. You should use the Hollandaise Sauce right away, so make it at the last minute. I don’t recommend refrigerating leftovers. 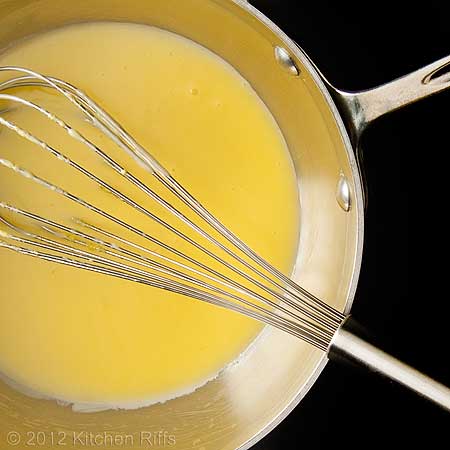 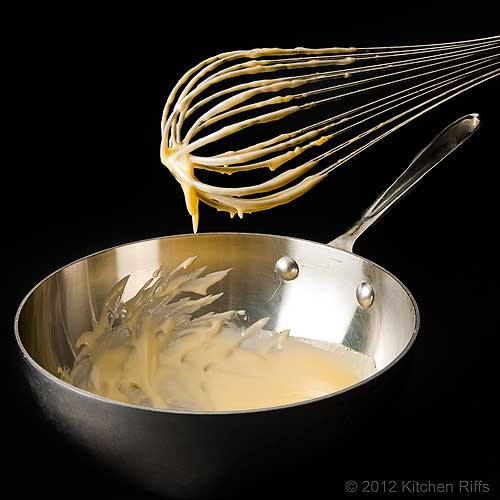 The famous French chef Auguste Escoffier simplified and modernized traditional haute cuisine in the late 19th and early 20th centuries. Among his contributions was recognizing that most sauces in French cooking were based on and derived from 5 basic recipes — he called them Mother Sauces. Hollandaise is one of the five. The others are béchamel (a white sauce made with milk or cream), espagnole (veal stock), velouté (a white sauce made with poultry, meat, or fish stock), and tomato.

Of all these sauces, Hollandaise may be the one that tastes best on its own.  But of course you make the sauce because you want to put it on something!

It’s the classic topping for Eggs Benedict.  And Hollandaise has a marvelous affinity for fish (salmon in particular).  Another classic pairing is with artichokes.  Dip each leaf in the sauce, and then scrap the artichoke meat — and sauce — off with your teeth.  Heaven.

Or try Hollandaise on asparagus.  I think it goes particularly well with the intense flavor that develops when you roast the asparagus.  And because Roast Asparagus is a tradition at the Kitchen Riffs’ Easter table, it will be the subject of a post later this week.