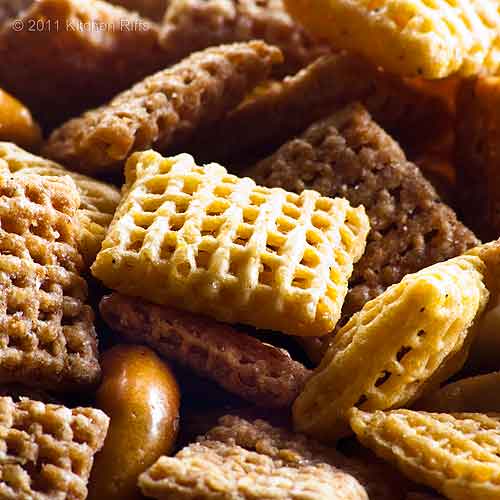 Chex Mix is one of the best party foods going.  Put out a bowl of it, and you’ll have an irresistible guest magnet.  People hover around, grabbing handfuls until the bowl is empty.  And then they’ll look for a refill.  It’s great for New Year’s Eve – or any other big party night.

For most of us, serving Chex Mix means buying a packaged snack that’s shelved with potato chips, pretzels, and corn chips in the “salty snack” aisle of the local supermarket.  This pre-packaged stuff is readily available, and it’s pretty tasty.  But it can’t compare to the homemade version.

Haven’t had homemade Chex Mix lately?  Or ever?  You’re in for a treat.

And once you’ve tasted the real thing, you’ll have a hard time going back to the packaged variety. 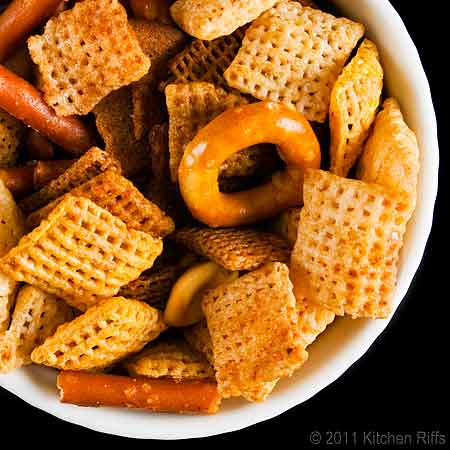 The recipe for Chex Mix is very flexible. The main ingredient you’ll need is Chex cereal, which is available in corn, rice, and wheat flavors. I prefer using all three in my Chex Mix, but you can use any combination that pleases you. You’ll also need a combination of additional munchies, preferably salted. Pretzels, mixed nuts or peanuts, and garlic bagel chips are common ingredients, but you can use anything your heart desires – and in just about any proportion. My general rule is: For every 9 cups of cereal, use 4 cups of other munchable ingredients. Add some butter and seasoning, and there you are.

My recipe is adapted from the original recipe.  It yields 13 cups, but it’s easy to cut in half – or double. It requires about 15 minutes hands-on time, and about an hour and a half total (most of that is baking time). 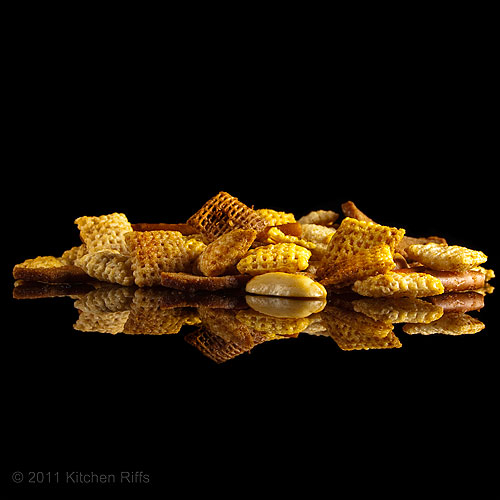 Chex Mix originated in the early 1950s. Both Wikipedia and the Food Timeline have good historical information about Chex Mix (the latter is particularly interesting).

Chex Mix was born at a time when salty snacks like potato chips and corn chips were not daily (or even weekly or monthly) fare for most people. Chex Mix satisfied the lust for salt and fat at a time when packaged snack foods just weren’t consumed on a regular basis. I remember my mother stirring up vast quantities of Chex Mix when my parents entertained (she baked it in the roasting pan she used for the Thanksgiving turkey). She also often made Chex Mix around Christmas and New Year’s as a treat.

The Kitchen Riffs buy packaged Chex Mix more than we care to admit. It’s one of our guilty pleasures — foods that we’re embarrassed to admit we crave. Sort of like Cheddar Cheese Chicken Curry or Frito Pie.

I hadn’t made Chex Mix for years — until I decided to write about it. In the past few weeks, I’ve made 3 (big) batches.

“Just so I could perfect the recipe,” I explained to Mrs. Kitchen Riffs.  “My readers deserve and expect it.”

“Admirable,” she said, patting my belly.  “And you’ve left no mix unmunched.”