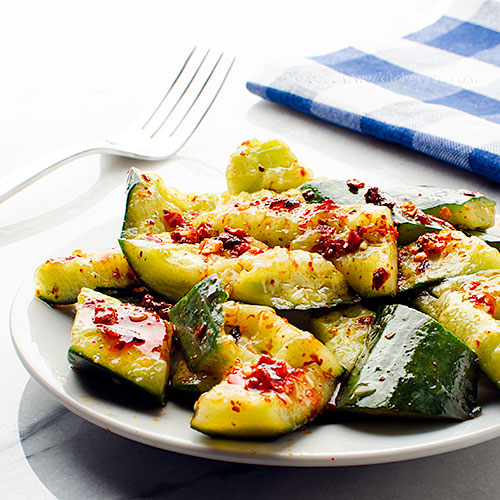 Cukes! Is there a better veggie for beating summer’s heat?

For a quick pickled version, try them in this Sichuan dish. It combines cudgeled cukes with tangy extras. It’s terrific with Chinese food, of course. But it works just as well with traditional cookout fare. So skip the coleslaw and serve this as a side with pulled pork or barbecued ribs. Or hamburgers and hot dogs. 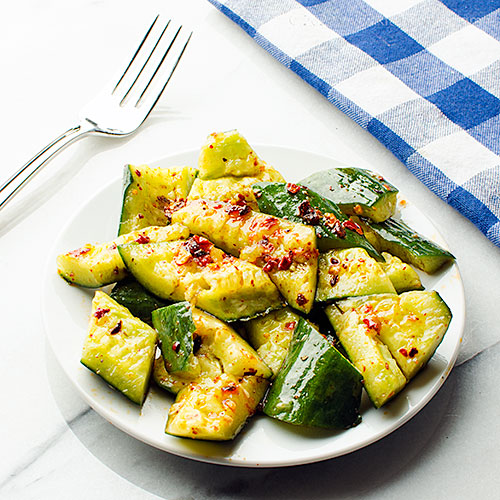 There are numerous versions of this dish, although most recipes are pretty similar. Most flavor the cucumbers with garlic, vinegar, and chile oil or Sichuan peppers. Our version uses chili crisp, a spicy Asian chile-based sauce/condiment that gets its crunch from roasted onions.

Why smack or smash the cucumbers instead of cutting them up? Smacking breaks the cukes into jagged, irregular pieces. Their rough texture helps capture and absorb the flavor of the other ingredients.

Don’t count on leftovers. This dish doesn’t store well, in our opinion. So plan to serve it soon after you make it (though it can sit around for an hour or so before you dish it up). 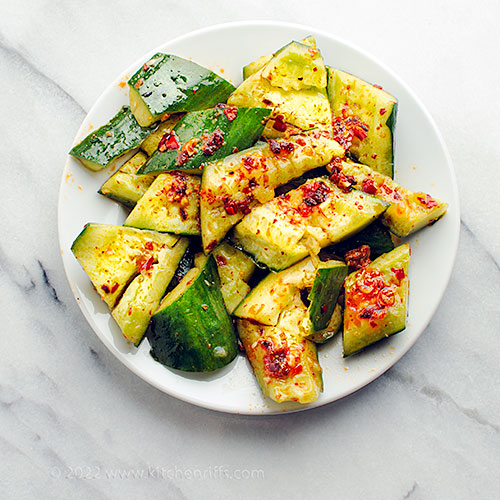 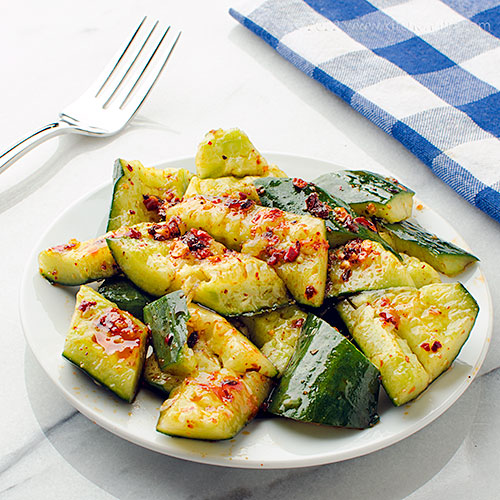 “Well, Pliny the Elder called them vegetables, so that’s good enough for me,” I said.

“Of course, he died in a volcanic eruption,” said Mrs K R.

“He was trying to save people from Mount Vesuvius,” I said. “It was a Herculaneum effort.”

“Pumice me I won’t hear any more of these jokes,” said Mrs K R.

“Just a reminder,” said Mrs K R. “You’re not the only one who can smash things around here.”

OK, guess that one cratered.

I've seen similar recipes before, and it seems like a good idea with one problem for me -- I prefer peeled cucumbers because the skin tastes bitter to me. The flavor combination looks nice, though.

HI Mae, this of course always works if you peel the cukes. Which we always do when we get the cukes with those waxy exteriors. Thanks for the comment.

I’ve never heard of this! Fascinating! And I love the chili onion crisp. Have you ever had the Trader Joe’s one? Incredible.

My kind of salad. I'll eat anything with chili crisp on it. YUM.

Hi Mimi, we haven't tried Trader Joe's chili crisp yet -- but we want to. :-) Thanks for the comment.

Hi Pam, we'll eat anything with chili crisp, too. :-) Thanks for the comment.

This is my favourite cucumber salad! I remember when I was in Beijing and had this salad for the lunch almost everyday for a month.

Hi Angie, I could totally see having this everyday. :-) Thanks for the comment.

Perfect salad for those days you're stressed or angry (So you would both relax by smashing the cucumbers and then have a nice meal) :)

Hi Ben, this definitely is fun to make no matter what mood you're in. :-) Thanks for the comment.

We eat a lot of pickled cucumbers. I've never added chile crisp, just some chile flakes. I saw a recipe recently for chile crisp that I was planning on making, so I guess I better get to it. Can wait to add it to this salad. Thanks John!

Hi MJ, chili crisp is great all by itself, and definitely with cukes. :-) Thanks for the comment.

Hi John I had to google chilli crisp as I've not seen this in Australia. It seems chilli oil or infused oil with chilli etc is the best substitute. It is a brilliant idea to bash the cucumbers which I have often sprinkled with chilli flakes or paprika before but your suggestion here is wonderful. Thank you.

Hi Merryn, chili oil with a bit of sesame oil (and maybe added chili flakes) would be a great substitute for chili crisp in this dish. Might want to increase the garlic slightly, too. Thanks for the comment.

Hi Speedy, cucumbers are great! And this is such a nice recipe for them. :-) Thanks for the comment.

This is definitely an interesting dish! I am liking the technique bashing the cucumbers-it serves to open them up to receive the spices. Very cool. Thanks, for sharing the recipe idea.

Hi Velva, bashing cukes is fun, and results in a really tasty dish. :-) Thanks for the comment.

John, I have a jar of chili crisp in the fridge that I love and have been thinking of ways to use it besides noodles. This recipe is a perfect find! Not only are the flavors wonderful, getting to smash the cucumbers will be too much fun!

Hi Kelly, smashing cukes really is fun! :-) Thanks for the comment.

This is a wonderful idea John a mix of these oils would be great with added Asian flavours. Thanks for your suggestion.

Hi Merryn, might be fun to try this dish with fermented black beans. :-) Thanks for the comment.

That is a really good way to perpare cucumber. Love it

John, this sounds SO amazing. I'm a big fan of cucumbers in many iterations, but this dish sounds like it will be a keeper. Thanks for sharing it.

Hi Terry, this is truly worth making -- a lot of nice flavor. :-) Thanks for the comment.

Ha ! What a Friday afternoon lesson ! I truly have 'smashed'cucumbers but they have never been naughty enough to be 'smacked' ! Lesson number two - 'chilli crisp' largely seems to be an 'over-you-know-where 'thing' ! Found some online firms to buy those sourced in the States but also some lovely simple recipes to make this at home ! I very much like your offering . . . once our cucumbers come down from their current price of $A 10-12 EACH I'll be trying . . . thanks !

Hi John, I usually make cucumber salad with asian vinegar but have never added chili crisp. I have a jar in the fridge and will add some next go round. Thanks for the tip.

Looks great. It reminds me of a quick kimchi.

Hi Eha, chili crisp is really worth sourcing -- it's magical. I buy a brand produced in China, and have just never bothered making my own (there are a lot of recipes out there). Should probably do that one of these days. :-) Anyway, this is a lip smackin' good dish! :-) Thanks for the comment.

Hi Bernadette, you'll love adding chili crisp to a cuke salad! SUCH good stuff. :-) Thanks for the comment.

Hi Dahn, now that you mention it, this is somewhat like a quick kimchi. Kinda. Sorta. :-) Thanks for the comment.

Interesting. I never heard of smashing your cucumbers for a salad. I'm definitely going to try this. Sounds delicious!

One of my favorite Chinese side dishes. In fact, one of my favorite sides, period! And so easy to whip up if you have the chili crisp sauce on hand. (Something I'm so addicted to I can eat it straight from the jar, by the way!)

Hi Frank, I sometimes eat chili crisp straight from the jar, too! :-) Really love that stuff. And this dish! Thanks for the comment.

i do love cucumber! what is chilli crisp? I think it's oil with bits of chilli floating around in it? :-) I do have a jar of chilli oil in the fridge.

Hi Sherry, chili crisp has oil, but it's a crunchy condiment with fried onions. Really surprised it hasn't made its way to Australia -- maybe the Chinese export it only to the US? In any case, you can make this with chili oil and loads of garlic -- that's actually the more usual way to make this dish. Thanks for the comment.

This salad looks so good! Especially love the look of the chili crisp on top of cucumbers.

Hi Balvinder, it's a wonderful salad! LOVE chili crisp. :-) Thanks for the comment.

What an interesting salad! Bill doesn’t like cucumbers so it’s perfect for me to try as he’s not a fan of anything spicy either! A great summer recipe!

Hi Liz, this really is nice for summer -- refreshing, yet really flavorful. :-) Thanks for the comment.

This would go nicely with my Beef Lo Mein! Thanks, John. As you know, I will skip the garlic but will use everything else. Seriously, I cannot tell you how often I thank you for introducing me to chili crisp! And how lucky was I to find a garlic-free brand! I like the idea of using this as a side for burgers - I am not really a coleslaw kind of guy, and this is right up my alley.

Hi David, we do like coleslaw, particularly a vinegar-based one, but this is better. So glad you're liking chili crisp! :-) Thanks for the comment.

Every time I make a smashed cucumber dish, I end up eating nearly the entire thing myself. It's just that good. A perfect dish for the dog days of summer, too.

These looks so full of flavour, I've never had smashed cucumbers or heard of it, and I am happy to eat the skin. I'll be on the hunt for chilli crisp now as well, so many new and interesting aspects to this recipe. Perfect for summer. Thanks so much for bringing another very different recipe to the table.

Hi Carolyn, it really is just that good! :-) Thanks for the comment.

Hi Pauline, hope you can find the chili crisp -- such good stuff. But chili oil (and garlic) works pretty well, too. :-) Thanks for the comment.

This sounds like the perfect summer recipe. I love cucumbers, and the ingredients that are added to this recipe sound delicious.

I've never seen a smacked cucumber dish before! I love cucumber salad and this looks like a fun and yummy way to eat them!

Hi Amy, this is indeed a really yummy way to eat them. :-) Thanks for the comment.

Looks delicious! I am sure it must be so delicious.

Hi B&S, it's a terrific dish! Loads of flavor. :-) Thanks for the comment.

What an interesting salad, and if memory serves, I have a bottle of black vinegar in my vinegar pantry so this salad will definitely grace my meal plan this week.
Éva http://kitcheninspirations.wordpress.com/

Hi Eva, bet you'll love this! Loads of flavor. Loads. :-) Thanks for the comment.

I've never seen a recipe like this before. It sound fun to pound away on the cucumber in a baggie.. Will have to give this one a try. sounds tasty.

Hi Judee, who knew that pounding a cucumber could be such fun? :-) Thanks for the comment.

John, I adore cucumber salad, especially those with a spicy Asian kick. Where do I get onion crisp? This is new to me and after reading some of the comments, it sounds like I'm really missing out. You've just taught me a second trick: smashing cukes! This I gotta try too!

Hi Roz, any Asian market will have it, and it's available from Amazon. Trader Joe's has its own version that's supposed to be pretty good, although we haven't tried it. It's really worth seeking out. :-) Thanks for the comment.

John, this looks absolutely amazing. Smashed potatoes I've had, but never cucumbers. We always have chili crisp in the fridge -- at the ready for moments like this. :-) ~Valentina

Hi Valentina, you'll love smashing cucumbers, I predict. :-) Thanks for the comment.

Loving everything about this salad - the crunch, the heat and the dressing. SO refreshing and so delicious! 😋