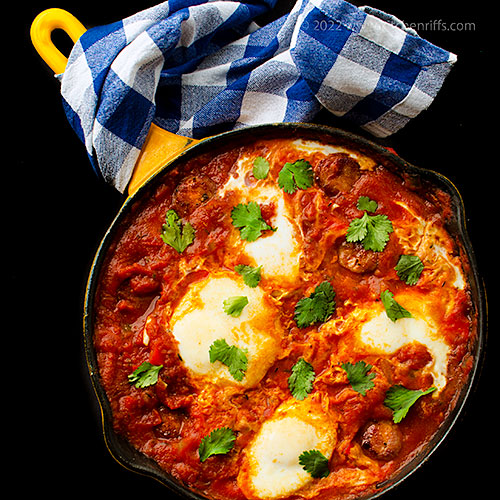 Shakshuka (aka shakshouka or chakchouka) is a spicy tomato stew that features a garnish of cooked eggs.

The dish probably originated in North Africa. Today, versions of it are found throughout the Mediterranean region. The basics of the dish remain the same no matter where it’s found, but the end flavor can vary.

We decided to put our own Creole-spiced spin on shakshuka, giving it a New Orleans vibe. Jazzy, in other words. 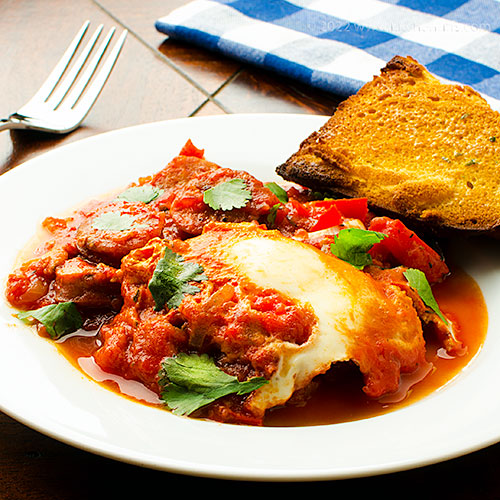 This dish always features tomato, and usually includes onion and bell peppers (green peppers are typical, though we’re using red ones in this recipe). Typically, the eggs are cracked into the simmering tomatoes and gently poached.

Shakshuka is often served as a vegetarian dish, though it’s not uncommon to see versions with meat (particularly ground beef or lamb, or maybe spicy sausage). Our recipe for Moroccan Kefta and Tomato Tagine is actually a form of shakshuka.

Our version of this dish takes the flavor in a New World direction. We use spicy Louisiana-style andouille sausage and Cajun/Creole seasoning to zip up the flavor (see Notes).

Because this recipe contains eggs, many people think of it as a breakfast dish. But we often eat breakfast for dinner, so it works as an evening meal for us.

Prep time for this dish is about 10 minutes. Cooking time adds 20 minutes or so.

This dish yields 4 servings. We like to serve it with crusty bread, preferably toasted (garlic toast is wonderful). 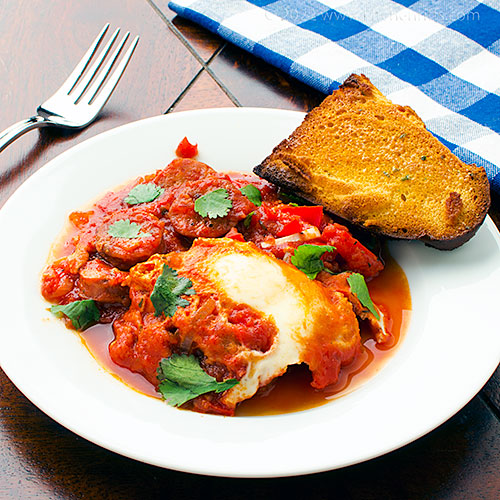 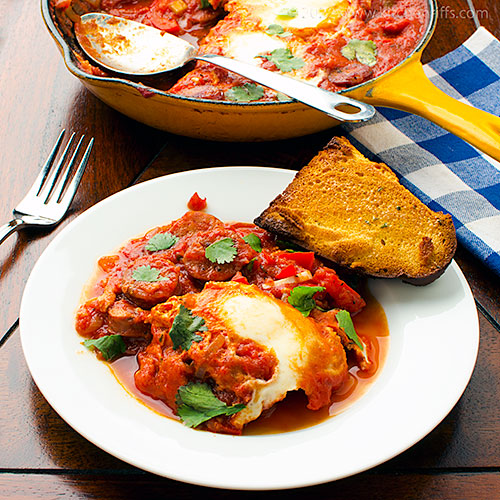 “So you’ll be strutting your funky stuff for a while, I suppose,” said Mrs K R.

“That note was off key,” said Mrs K R. “Maybe you should tune your tongue.”

I always enjoy Shakshuka or any egg dishes. I too like to use homemade spice blends. So much fresher and cheaper!

Hi Angie, and the best thing about homemade spice blends is you can make them exactly to your own taste! It's that "season to taste" thing. :-) Thanks for the comment.

My kind of breakfast! YUM.

John, I could smell this cooking as you described adding ingredients to the pan! I've actually never made shakshuka before, but your Cajun spin on it makes me think it's time to do so. Thanks!

Hi Terry, shakshuka is definitely worth making. We also make a Mexican version that's pretty good. :-) Thanks for the comment.

I used to attend an event in Palm Springs called Jazz Breakfast. Were you on the organizing committee? This is a wonderful interpretation. GREG

Hi Greg, LOL, never been in Palm Springs. :-) Thanks for the comment.

When I first tried shakshuka in Tel Aviv several years ago, I didn't dream that it would become so popular that it would inspire all sorts of fusion versions. I've also had one that used chick peas, but no eggs, so I don't even know why they used the same name for the dish. Interesting experiments.

Hi Mae, it's interesting how certain dishes will capture the imagination. This is such a great one. Fun to play with. :-) Thanks for the comment.

It looks very good, and andouille sausage screams to me. But the only way I could make this for our dinner would be to make sure the egg touched TheHub's portion only. I don't eat eggs except a very rare scramble or frittata.

Hi Anne, easy enough to crowd a couple of eggs together. :-) Thanks for the comment.

Hey John, wow this looks amazing! I've seen Shakshuka around, but idk why we've never tried it. The Creole flavors infused into your version have me convinced we need to though. We love the andouille sausage to LA too!! Thanks for your recipe for the Cajun seasoning. I have some common, store-bought seasoning mixes in my pantry, and you're right they are very salty so we use them sparingly LOL Wonderful recipe and post!! 🔥💖

Hi Marcelle, there are some great tasting commercial Cajun seasonings, but wow! SO salty! Homemade is definitely better in this case. :-) Thanks for the comment.

Well, I think I need to give the dish another try. Your version is very very appealing! We love andouille of course and anything spicy. Looks quite delicious!

OMG, this is one of my favorite dishes, whats even better you put it up a notch by making it Creole style. Love it

Hi Raymund, we love it too! :-) Thanks for the comment.

Great spin on this dish. I don't know why I don't make this very often. I will have to try your version, it sounds fabulous

Wow, this sounds like it's just packed with flavor. Yum!

This would make an amazing Sunday Brunch.

HI Dahn, we don't make this dish all that often, either. But it's terrific! :-) Thanks for the comment.

Hi Frank, it really does have a ton of flavor.:-) Thanks for the comment.

Hi Bernadette, this is a perfect brunch dish -- a bit filling, but that's appropriate for brunch. Thanks for the comment.

Alex always makes us shakshuka when he comes home. I'll have to pass on this recipe. Let the good times roll!

Hi Laura, one of our favorites too! Although more often than not we eat it for dinner. :-) Thanks for the comment.

Hi Abbe, Alex will love this! :-) Thanks for the comment.

Love the kitchen antics between your wife and you. I keep telling my husband how much more fun it is when we are in the kitchen together! Thanks for this non-shellfish New Orleans recipe. It's nice to know recipes without shellfish from N.O. My son is moving there in about one month and so I'll finally be able to experience a little bit of this cuisine!

Hi Roz, we always have fun in the kitchen! :-) Thanks for the comment.

Hi Eha, we love playing with this classic dish! It takes to so many different variations. This "Creole" one is our latest whim. :-) Thanks for the comment.

I never had this dish but it looks so good. I don’t know if my husband would eat it.

Hi Gerlinde, it IS really good! :-) Thanks for the comment.

when we first moved into this house we had renos done so lived downstairs without a kitchen. we lived on dishes like these that we could just throw in the electric frypan. so easy and tasty.

Decision made, shaksuka for Sunday night dinner. We love it but haven't made it for a while. I sometimes use chorizo for a spicy sausage. You have such interesting spices embedded into your history. Your recipe looks so very tasty. Great dish thanks KR.

This morning, at the market, I will be getting all the ingredients to make my own andouille sausage. I don’t have a sausage stuffer yet, so I will make patties and freeze them. I think it will work pretty well for this person. Shakshuka is one of our favorite dishes — one that I learned when I was a freshman in college. Then, I only called it eggs poached in tomato sauce. I have never tried it with meat. Thanks for this recipe and inspiration, John.

Definitely gonna need some crusty bread for dipping ... you get it ready and I'll bring some bread, deal?! Seriously, this looks hearty and rich, perfect for Sunday brunch.

We love Shakshuka and this Creole spin sounds incredible. Will have to give it a try.
Eve http://kitcheninspirations.wordpress.com/

Hi Sherry, this really is an easy dish to put together, isn't it? Awfully good, though. :-) Thanks for the comment.

HI Pauline, Creole spicing is so nice -- lovely favor. :-) Thanks for the comment.

Hi David, making your own andouille will be fun! Making patties is a great idea. I suppose you could also just use the loose sausage meat -- kind of like an Italian meat sauce -- although I don't think I've ever seen shakshuka made that way. Thanks for the comment.

Hi Judy, LOL! You definitely need bread for dipping in the sauce. :-) Thanks for the comment.

Hi Eva, we love the Creole version of shakshuka! Although we've never met a version we didn't like. :-) Thanks for the comment.

I never grow tired of this dish. Your kicked-up creole version is a really nice twist.

Hi Velva, there's a good reason this is a classic dish! :-) Thanks for the comment.

Perfect for weekend company. I've been wanting to make shakshuka for years and you've given me a much needed nudge!

This sounds like a winner and perfect for a late Sunday breakfast.

This dish is always on my "to-make" list but I've never tried it. Sad. I love the flavors you incorporate here. You've might have spurred me on to get with it.

Hi Debra, you really need to make some version of this -- such a great dish. Really, really flavorful. :-) Thanks for the comment.

I've seen many versions of shakshuka, but a Creole one is really inspired. The andouille in it really makes it a wonderfully hearty dish, too.

Hi Carolyn, this really is pretty hearty. Could probably omit the andouille, but it's SO good! :-) Thanks for the comment.

I've been making your shakshuka for years. Now I can't wait to try this version.

Hi JCHINLEE, isn't this a neat version? SO much flavor! :-) Thanks for the comment.

I love this version! I think I might add some spicy sausage to it next time I try it!

Hi Ashley, this is such a fun change of pace from the traditional recipe, isn't it? :-) Thanks for the comment.

We are fans of shakshukah. Of course my husband being from the Middle East had been eating and making it long before it became known in the US. I like your version with a creole twist.

Hi Judee, such a great dish, isn't it? Nice to have an expert make it for you! :-) Thanks for the comment.

Wow, this looks amazing, John. And I had jump to the Moroccan Kefta Tagine, which looks spectacular too. I will be busy with these two recipes. :-) ~Valentina
P.S. Have I ever mentioned that I LOVE that your blue and white napkin makes an appearance (I think) in every non-cocktail recipe? It's so awesome.

Hi Valentina, this is such good stuff. As is the kefta tagine. Glad you noticed the napkin -- it does appear in almost every non-cocktail photo. I have a weird sense of humor. :-) And n a more practical matter, it makes for an excellent environmental watermark. Thanks for the comment.

Putting a Creole twist to shakshuka is really brilliant. This is going to the boys new favorite breakfast. Book marked for the weekend festivities. Thanks

Hi Bobbi, the boys will love this! :-) Thanks for the comment.

We traditionally make Shakshuka alot during the year. Actually there are many different shakshuka recipes. Your recipe looks so same to ours. Looks really great. Thanks for the recipe.

Hi B&S, there are so, so many different variations of Shakshuka -- but the basics are always the same. :-) Thanks for the comment.

John, that looks like a beautiful meal for any time of day. I've never made a shakshuka, creole or otherwise, so I need to try this soon!

Hi Jean, this is SO good -- definitely worth making. :-) Thanks for the comment.

We do breakfast for dinner sometimes too. This looks so flavorful John, I say "yes" to it in an instant!

Hi Inger, we have breakfast for dinner one night almost every week. And this is a great one. :-) Thanks for the comment.

This is so delicious and hearty. My family will love this flavour packed shakshuka.
And I am so glad that I could manage to finally get through to your blog after so many weeks of accessibility issues.
Have a great week ahead!

Hi Taruna, I'm glad too! So sorry about the issues -- have no idea what's causing that. :-( Thanks for the comment.