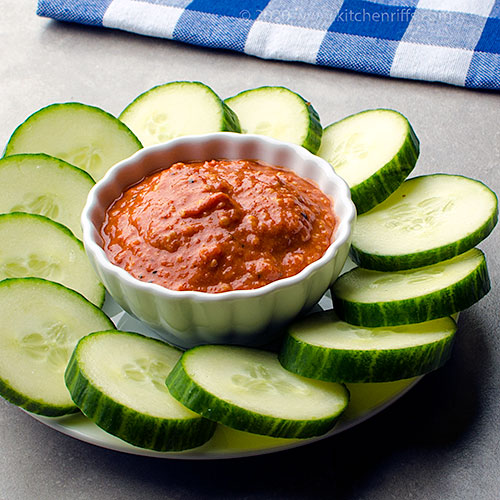 Romesco sauce originated in the Catalan region of northeastern Spain. No two recipes seem to be quite the same, but virtually all of them include red chile pepper (both fresh and dried), tomato, garlic, and nuts.

Traditionally, this sauce is served with seafood. It’s also terrific with grilled meat and poultry, or when used as a dip with chips or crudités. Or as a sauce on vegetables.

Versatile and delicious. Two of our faves. 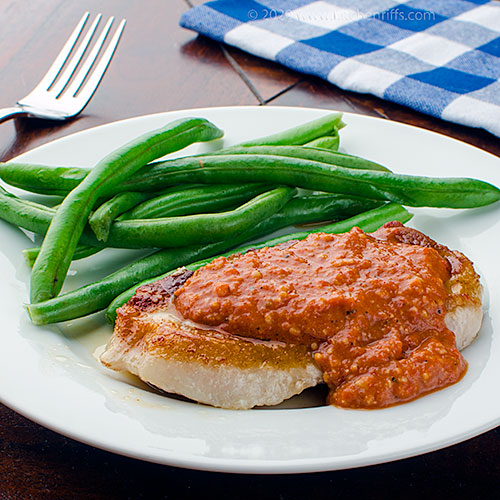 Romesco sauce is traditionally made with dried ñora chile peppers, and often with piquillo peppers as well. Both can be hard to find in the US (they’re mostly available through online sources).

Fortunately, some good substitutes are commonly available. Our version of the recipe uses roasted red bell peppers and ancho chile powder, both of which can be found in almost any supermarket (see Notes for other substitutions).

Many Romesco recipes use dried breadcrumbs as a thickener. But we’ve opted to add extra nuts instead because we think they provide better flavor and texture (as a bonus, this substitution also makes the dish gluten free).

We’ve made numerous versions of this sauce and have sampled several ingredient combinations. The version we discuss here (which is heavily influenced by Martha Rose Shulman’s recipe in Mediterranean Harvest) is our favorite. It yields excellent flavor and is easy to prepare.

You can make this dish from start to finish in about 30 minutes (much of that time involves waiting for the roasted peppers to cool off enough to be handled). The sauce tastes best if you let it sit at room temperature for about an hour before serving it.

This recipe makes about 2 to 3 cups of sauce.

Leftovers keep for about a week if refrigerated in an airtight container. 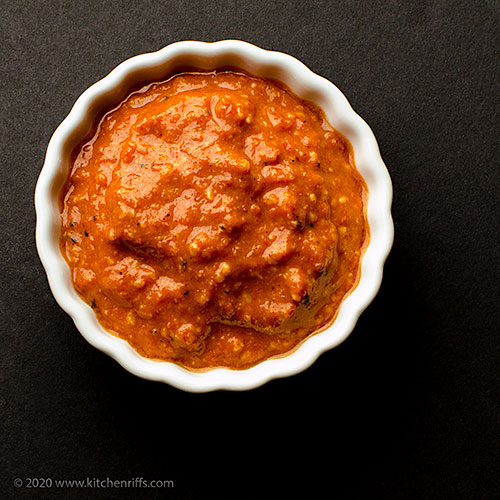 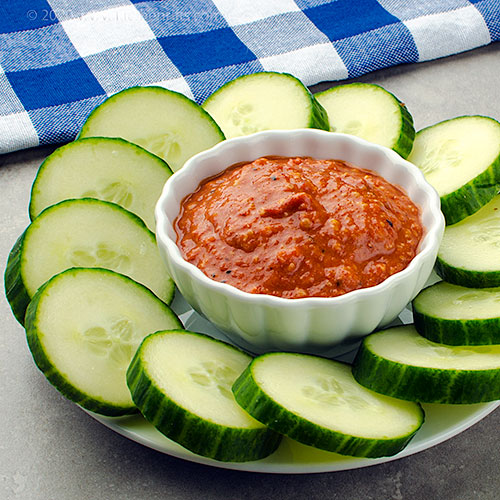 “Where we won’t be going this year,” I said.

“Yeah, bummer,” said Mrs K R. “We won’t get to hear them boast about their soccer team.”

“Which is the best in the world!” I said. “As they always helpfully point out to us.”

“If you’ve got it, flaunt it,” said Mrs K R. “Though I’d brag about Romesco instead. And their wonderful Crema Catalana.”