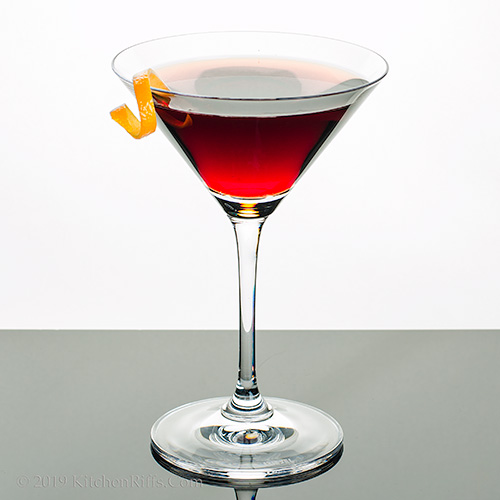 A dark-horse drink for the holidays

Ever heard of the Suburban Cocktail? We’ll wager you haven’t.

But it’s worth getting to know. The Suburban’s unusual blend of rye whiskey, dark rum, and port is warming and cheering – just like the holidays are supposed to be.

Plus, the Suburban is named after a horse race. You may find that fitting as you gallop down the final shopping stretch. 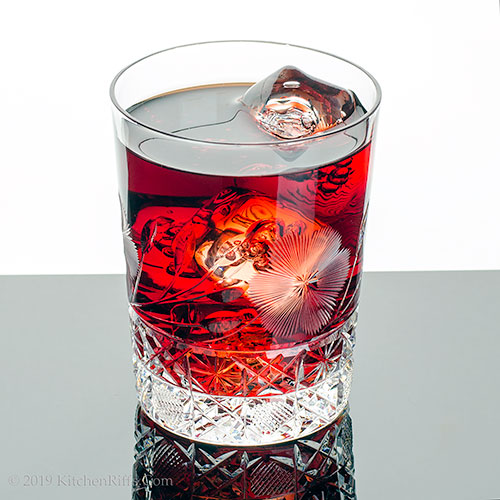 The Suburban looks holly-jolly festive. And its flavor is perfect for chilly weather. But this drink would make a good warm-weather sipper too, especially if you serve it on the rocks.

Speaking of rocks: Most bartenders serve the Suburban “up” in a cocktail glass. We think it’s better over ice in a rocks glass. Feel free to follow your fancy on this. 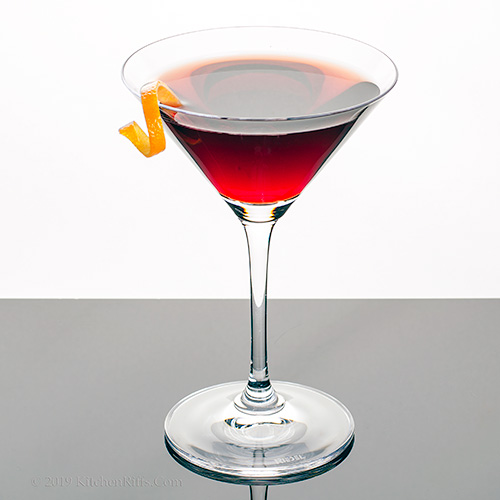 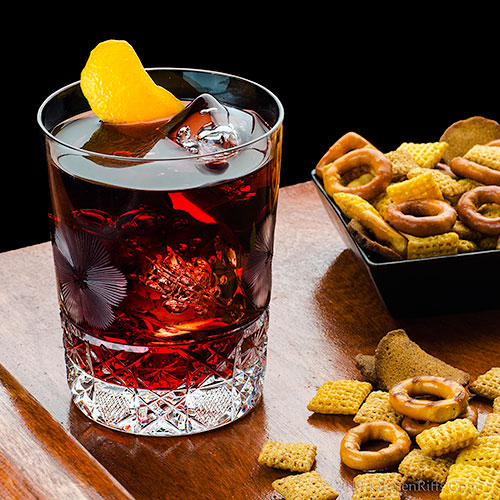 “Trifecta,” said Mrs. Kitchen Riffs. “You win across the board with this drink.”

“Makes me feel like a cocky young colt,” I said. “Ready for the fast track.”

“Well, I’ll canter over to the bar and make us another,” I said.

“Stiff drink, though,” I said. “Two should be our limit – as I always say at the betting window.”

wow The pictures are so GORGEOUS! I would definitely want to take one if I drank!

Hi Angie, it's a really interesting drink -- its flavor is a bit like a Manhattan. Really good! :-) Thanks for the comment.

I've never heard of it but know I'd love it because Rye Whiskey is my favorite!

So many cocktails... so little time. Especially when you are a wine drinker like me!

My daughter recently ordered a very vivid green, tarragon-flavored cocktail called the Tarkhuna at a Georgian restaurant. That might make your Christmas cocktail list!

Hi Pam, this drink is kinda obscure these days, but it should be more popular -- it's good! :-) Thanks for the comment.

Hi Mae, I had to Google that -- :-) Apparently there's a soft drink of that name, and I'll bet the cocktail uses it as a base. Interesting! Thanks for the comment.

Waaay too many cocktails lately. I originally signed up to receive food recipes.

Hi Anonymous, usually one cocktail a month. Except during summer, when it's often twice a month. Just avert your eyes on those weeks when we feature a cocktail. Or check out the archives. :-) Thanks for the comment.

I love port and sip it often. Your cocktail looks fantastic but there’s only scotch in our house and no other whiskey. Oh well I have to order it in a restaurant. Prost!

Hi Gerlinde, you'd definitely want rye or bourbon in this drink, I think. Worth trying at some point -- its flavor is SO enticing. :-) Thanks for the comment.

You are correct. We have not heard of this drink but we are very intrigued by its deep burgundy color and taste. A perfect nightcap after a day of holiday cheer.

Wow, that looks incredibly good! Those photos are stunning!

Hi Bobbi, it's the port that gives it that color. :-) Thanks for the comment.

Hi Matalia, actually tastes better than it looks. :-) Thanks for the comment.

Beautiful! Wish I could my little orange peel twists to look that good. :)

Hi Lea Ann, you gotta re-twist those little things several times during the shoot. It's a pain to keep them looking that way! :-) Thanks for the comment.

as usual, fab photos KR! this sounds like a hefty drink. i reckon a couple would have you under the table:-) mm you could read that in either of two ways...

Hi Sherry, definitely on the hefty side. And yeah, one could read that two different ways! :-) Thanks for the comment.

This cocktail definitely seems like it packs a sophisticated punch. Something like that is often needed during the holidays lol.

Hi Laura, lol, a good holiday drink in many senses of the word. :-) Thanks for the comment.

Your cocktail photos are always stunning! What a perfect drink for the holidays!

This calls for a Saturday afternoon spectacular, complete with a fascinator this will be a perfect blend. It looks very debonair indeed John .

Funny how the mind works, when reading your title the first thing that came to mind was my first vehicle. It was a 1955 Chevy Suburban and yes we had more than one cocktail in it (different laws and times back then).
I love Canadian rye, rum and port so this one should go down very smoothly. Fantastic images John, you just keep getting better.

This one sounds smooth and deceptive... easy to drink, and easy to drink too much! Was thinking I had all the ingredients for a weekender but I seem to be out of rye... time to shop!

This sounds like a particularly alcoholic cocktail! Lovely colour and I bet the bitters give it a real edge.

Hi Merryn, :-) Debonair is a pretty good word to describe this! Thanks for the comment.

Hi Ron, you know, the first thing I also thought when I came across this drink was the Chevy Suburban. I suspect we're a somewhat similar generation. :-) Thanks for the comment.

Hi David, this IS really smooth, but you definitely know you have a serious drink in your hands. And yes, you do need to shop for rye! :-) Thanks for the comment.

Hi Caroline, we love bitters in drinks! So good. :-) Thanks for the comment.

Wow! Look at the color.Incredible! Looks almost too good to drink...

This one might be a bit too powerful for the likes of me, but the recipe could come in handy for guests. Your photos are absolutely gorgeous, especially the on-the-rocks--wow!

Wow! Rye, rum, and port - what an interesting combination! It does sounds festive, and I always like to have a new cocktail to present at holiday parties. Thanks! I'll try it.

Hi Balvinder, emphasis on "almost." :-) Thanks for the comment.

Hi Jeff, it's kind of a weird combo, but it really works. Thanks for the comment.

Oh John, this cocktail sounds amazing...deep in flavor and very soothing...I think I would like mine on ice.
Have a wonderful rest of the week!

Hi Juliana, it's good "up," but we agree over ice the better way to go! Thanks for the comment.

Hi Mae, I'll bet the "lemonade" is indeed what I found! Thanks for the info on what's in the drink. :-)

I’m betting this is really good! And rye whiskey is one thing among others we have on hand. Thanks John. You have no idea how much I need one right now.

What a beautiful color! And your tip about stirring struck a cord. I made a Manhattan last night and used a shaker. Those air bubbles really are a thing.

Hi Frank, this drink reminds me of a Manhattan, so I'd bet you'd like this. :-) Thanks for the comment.

I was going to say that I'd move to the 'burbs for this cocktail. Now you tell me I have to move to a barn! GREG

Hi Greg, didn't know the drinking was so good in the barn, did you? :-) Thanks for the comment.

You had me at orange bitters. I love that taste of bitter orange rind in anything, especially cocktails, and well, of course, marmalade. ;)

Hi Carolyn, orange bitters are SO good! We love them too. :-) Thanks for the comment.

I have never heard of the Suburban cocktail but it sure is a beauty. I love that it is named after a horse race.

Hi Dahn, not a common cocktail, but it should be! :-) Thanks for the comment.

And I bet it would knock your socks off! Love the color and another one to add to the list! Thanks, John!

Hi Pam sock removal is one of the side benefits. Effects. Whatever. :-) Thanks for the comment.

THIS drink just screams "cozy up with me on the sofa closest to the fire roaring in the fire place, in your cozy robe and fuzzy slippers!" haha!