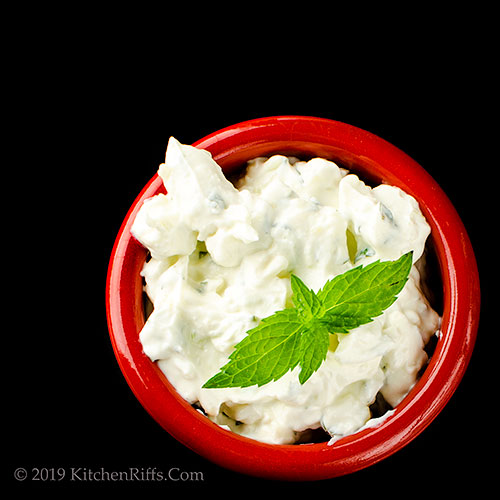 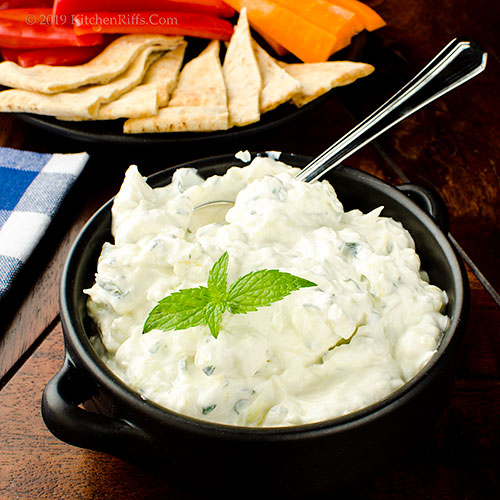 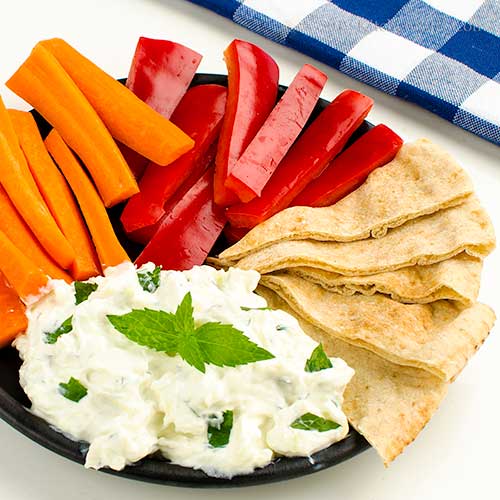 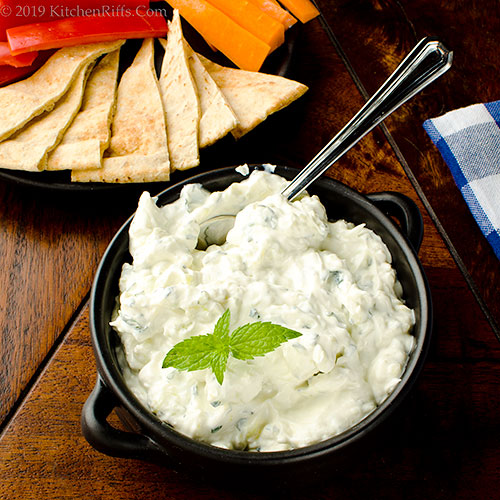 I love Tzatziki - it looks and sounds delicious!

Hi Pam, we love it, too! Makes a great appetizer. Or dinner. :-) Thanks for the comment.

OMG I have been pronuouncing it wrong all these years! This stuff is so addictive indeed. I have use dit on meats too but never as a soup. great idea, got to give that one a try.

Hi Evelyne, I was pronouncing it wrong, too, until I looked it up. :-) Thanks for the comment.

What a wonderful dish. We have a locally owned chain of restaurants by the same name and tzatziki is served with everything on the menu. Sometimes I make my own, but often I just buy a cup of it from them.
Punny dialogue!

Hi Anne, isn't this nice? You're lucky to have that restaurant chain local to you! Thanks for the comment.

You mentioned that it's widely used -- I especially like the version that's served on a falafel sandwich. Cool and hot at the same time (if the falafel is fresh out of the fryer). Sometimes also included on the falafel: a hot spicy condiment or hot peppers as well -- more contrast!

Remember that the Ottoman Turks ruled Greece as well as the eastern end of the Mediterranean, long ago known as "the levant." So all those cuisines have a lot in common, but the Greeks like to forget it.

John, my office fun committee (yes, we have one) is holding a dip contest soon. This could be a contender for me to consider bringing!

Hi Mae, food history is really interesting stuff, isn't it? Fascinating to see how the same basic recipe has spread throughout a large part of the world. :-) Thanks for the comment.

Hi Terry, dip contest! That does sound like fun. And back in the days when I worked in an office, I was on way too many committees. Never had the opportunity to be on a fun committee though -- that would have been . . . fun. :-) Thanks for the comment.

I make basically the same dish and call it Raita. It is very cooling when served with hot and spicy food. I think I will try your thicker version.

Hi Rocquie, raita is very, very similar. Good stuff no matter what you call it! Thanks for the comment.

wouldn't you know it, but my husband hates cucumbers. i don't think he's ever tasted one, but he certainly won't try tzatziki. but i get to make it when company is over! Thank goodness for foodie friends!

This is perfection in a bowl. Grate, salt, sit and squeeze the cucumber. Marinade the garlic in oil and add red wine vinegar if you prefer instead of lemon juice. Fantastic John! My son has a Greek friend who squeezes the grated cucumber through his fingers. It works too. I am going to enjoy your version, veru much. Thank you 🙂

Hi Mimi, your company will thank you for this. :-) Thanks for the comment.

Hi Merryn, I'll have to try the method of your son's friend! If nothing else, sounds like fun. :-) Thanks for the comment.

Methinks one could walk into most homes in Australia at any time to use a variant - have made it more-o-less the same way multiple times a week for decades ! So many brands at every supermarket but it truly takes less than ten minutes at home . . . I do not use 'dips' as a rule but have oft made this into a summer soup . . .

Hi Eha, although we like this as a dip, we probably use it more as a sauce. Wonderful on fish! And soup is really good, too. :-) Thanks for the comment.

Genius idea to turn this into a soup! It's such a versatile and refreshing dish.

Hi Laura, tastes good and really, really versatile. Winner! :-) Thanks for the comment.

Tzatziki is a staple in our house. My husband uses it for almost everything on his dinner plate :-))

Hi Angie, it's good stuff, isn't it? Sounds like your husband thinks so! :-) Thanks for the comment.

One of my favorite dips. It’s so refreshing and tasty, you never feel guilty indulging.

Love this dip and it's so easy to make!

I love tzatziki with anything☺

However you pronounce it, this is good stuff. Thanks for the reminder that I want to make this and soon. :)

Love it, but I have to make it without garlic (allergic), maybe a bit of sautéed shallot would work.

This sauce is for sure a favorite for its tangy taste and cooling effect. Sooooo good!

Hi Vicki, we love this stuff! And it's pretty healthy -- winner! :-) Thanks for the comment.

Hi Kankana, easy definitely works for us. :-) Thanks for the comment.

Hi Natalia, so versatile, isn't it? One of our favorites. :-) Thanks for the comment.

Hi Lea Ann, you DO want to make this again. And soon. :-) Thanks for the comment.

Hi Jean, I think shallots would work. I should try it that way, because I know people who can't tolerate garlic either.. Thanks for the comment.

Hi Judy, cooling is good at this time of time of the year. :-) Thanks for the comment.

I will never know what real tzatziki tastes like, but I know I love a garlic-free version! Thanks, John - a great reminder for a cool summer dish!

Hi David, nope, the garlic version most definitely isn't for you! I need to try a garlic-free version one of these days, because we do know others who can't tolerate garlic. Thanks for the comment.

A must have on these, we refuse to cook because it is just too hot days of summer. A little dip and all our favorite veggies and its a wrap.

Hi Bobbi, yup, this was dinner when we made this batch! :-) Thanks for he commentg.

Sounds like the perfect way to start off a fabulous Greek meal! It's been ages since I've made tzatziki--I think I have a plan for dinner next week!

I love tzatziki, it brings back memories . There was a Greek restaurant in Germany where I used to go with my girlfriend years ago .

Hi R, this will be good for Friday cocktail hour. :-) Thanks for the comment.

I could eat this all summer and even all year. Dip it, spread it, scoop it. This stuff is addictive :)

Perfect timing. I leave tomorrow for a sailing adventure in the Adriatic. We won't quite make it as far South as Greece, but I promise (thanks to you) I'll have tzatziki on my mind. GREG

Hi Dahn, we could eat this all summer, too! :-) Thanks for the comment.

Hi Greg, tsatziki should always be on your mind! Sounds like you're going to have a great trip -- enjoy. And thanks for the comment.

I love Tzatziki, but somehow never got around to make it...thanks for the recipe John, it is super easy, and I should not have any excuse to try making it...
Have a wonderful weekend!

Hi Juliana, super easy is just our speed. :-) Thanks for the comment.

Yummy! I love the refreshing taste of Tzatziki in the summer time!

Hi Frank, yummy is exactly the word! This is good stuff. :-) Thanks for the comment.

I absolutely love Tzatziki and what a perfect hot weather snack! Thanks for sharing your recipe. I've never made it before, and it's never too late to start.

Hi MJ, make this once, you'll make it a bunch. :-) Thanks for the comment.

We adore tzatziki but haven’t made it in ages! Great reminder to do so.
PS, these were some of your best (worst) puns 🤣
Eva http://kitcheninspirations.wordpress.com/

i make something very similar in summer but i turn it into a soup! just add iced water and there you go. delicious. the garlic is so fantastic in this. cheers sherry

Hi Eva, those puns are awful, aren't they? :D Thanks for the comment.

Hi Sherry, we often add chilled water (or even ice cubes) and serve this as a soup. It's good that way! :-) Thanks for the cmment.

This stuff is addictive. You can smear it on almost anything. And I love the idea of even making it into soup for the summer. I bet that is so refreshing.

Hi Carolyn, really versatile stuff. Good, too. :-) Thanks for the comment.

Always a yes to tzatziki and yours looks really nice and thick. So delicious! Have a great week ahead :)

Hi Taruna, really thick tzatziki is the best -- love its texture. And flavor, of course. :-) Thanks for the comment.

My favorite dip ever! Agree on serving with cut-up veggies and bread (pita bread),or any kind of chips but never ever thought of it as a soup.

Hi Balvinder, this is such a versatile recipe! So many different ways to use tzatziki. :-) Thanks for the comment.

I love Greek yogurt- I eat it by the bucket loads. Although I'm not a fan of cucumbers, when combining them with the other ingredients, I find that tzatziki is quite edible!

Hi Fran, Greek yogurt is our favorite type of yogurt. Love its texture! Thanks for the comment.

This has always been one of my favorite dips/sauces. Your recipe looks delicious and I would especially love it with spicy foods. Lovely! ~Valentina

Hi Valentina, isn't this good stuff? And you're right -- it's wonderful with anything spicy. :-) Thanks for the comment.

John, your tzatziki looks so creamy and delicious! We love eating it with kabobs and Middle Eastern/Desi rice dishes. It adds just the right amount of cooling and flavor. Great tip on salting the cucumbers first. That's the step I always miss!

Hi Kelly, salting the cucumbers really does help the texture of this dish. :-) Thanks for the comment.

Hi Marcelle, this stuff is addictive, isn't it? :-) Thanks for the comment.