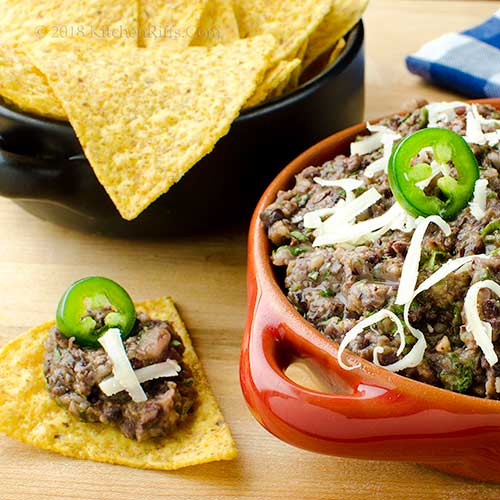 The Super Bowl is rushing toward us like a 300-pound lineman. So get those party platters spinning!

You’ll need plenty of munchies and goodies. One of our favorites is this spicy Jalapeño Black Bean Dip. It’s an easy recipe, and fast to make. So you’ll have more time to spend with your guests.

And watch your team win. Or not. 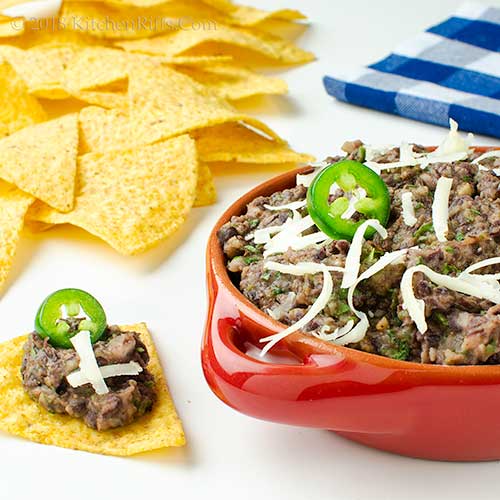 This recipe makes a fairly thick, viscous dip – so it’s perfect for dunking corn chips or spreading on a cracker. You could even use it as a sandwich spread.

We use canned black beans for this recipe, so it’s quick and easy. You could also use dried black beans, though that would take longer (see Notes). No black beans on hand? Pinto beans would work too.

The basic recipe calls for one can of black beans, which yields about enough dip for a bag of chips (depending on how large the bag is, of course, and how much you load onto each chip). If in doubt, it’s easy to double the recipe. Or triple it!

This recipe takes 10 to 15 minutes to make. You can prepare it a day ahead if you want (refrigerate the dip in an airtight container). Leftovers keep well for several days. 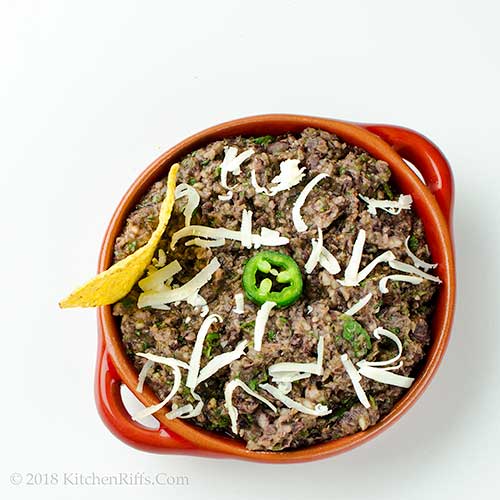 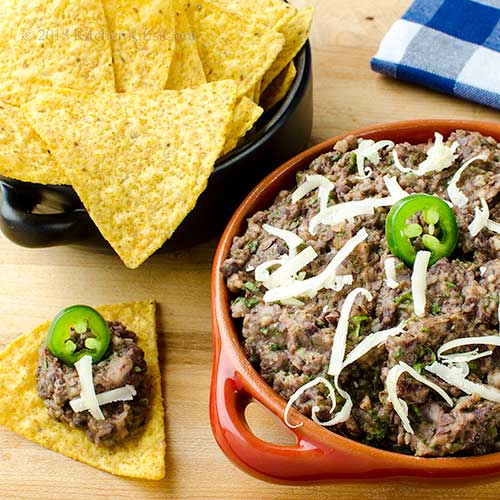 “So the Patriots are playing in the Super Bowl – again,” said Mrs. Kitchen Riffs. “Are they going to rename it the Brady Bowl?”

“At least this year they’re playing the Eagles,” I said. “Makes an old Philadelphia boy like me feel proud.”

“Are you sure you want to align yourself with the Eagles fanbase?” asked Mrs K R.

“Hey, Eagles fans are the most dedicated crazies in the world!” I said.

“I’ll say,” said Mrs K R. “I hear they had to grease the light poles in Philly to keep fans from climbing them during the playoffs.”

“True,” I said. “But that’s what I’d expect from Philadelphia, home of the Liberty Bell!”

“Which is cracked, by the way,” said Mrs K R. “And then there’s that jail cell they have permanently installed in the Eagles’ stadium. For when the fans get too engaged.”

“The authorities are just thinking ahead!” I said. “As befits the home of Benjamin Franklin.”

“I also read about that poll of NFL players,” said Mrs K R. “They say Eagles fans are the most intimidating in the league.”

“OK, so they’re a little over enthusiastic,” I mumble. “But I’m sure we could charm them with a delicious dip like this!”

“Nice segue, chip man,” said Mrs K R. “I’m thinking you felt a need to change the subject to something less spicy. Like a jalapeño-laced dip.”

Chile enough for you?