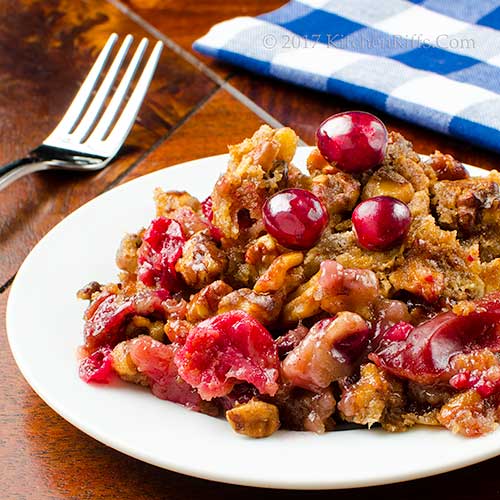 Autumn’s most popular fruits make this a festive dessert

Apples and cranberries are both autumn icons. So why not set them up for a date?

They get along beautifully in this dish: Cranberry ting enlivens apple mellowness. And baking concentrates their flavors, bringing out the best in both.

With Thanksgiving coming up soon, you’ll want to add this dish to the menu. Your guests will gobble it up. 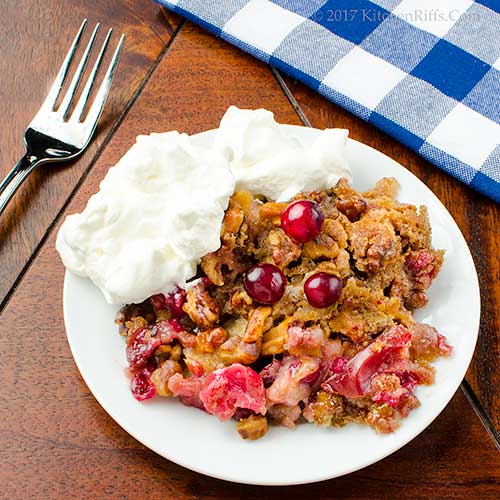 Crisps (called crumbles in the UK and Australia) are similar to cobblers. But instead of using a biscuit topping, a crisp typically is topped with streusel – a crumbly mixture of butter, flour, and sugar.

This crisp recipe is adapted from one that appeared in the November 2001 issue of Bon Appétit. The original recipe called for adding uncooked oats to the streusel topping. But Mrs. Kitchen Riffs – the dessert maven in our household – prefers to use walnuts instead (an idea she also used in our recipe for Walnut Apple Crisp). We think nuts provide better texture, and richer flavor.

Prep time for this recipe is about 30 minutes. Baking adds another hour or so. You may also want to let the crisp stand for at least 30 minutes before cutting, so it has time to firm up.

This dish serves 8 to 10. Leftovers keep well for a few days if refrigerated in an airtight container (you can also freeze them, in which case they will keep for at least a month or two).

For the nut crumble:
For the cranberry-apple base:
For the (optional) garnish: 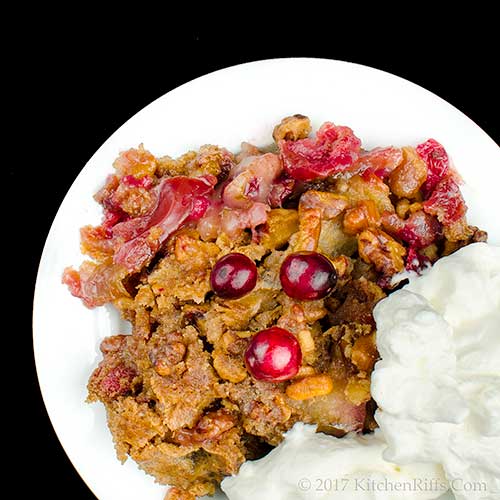 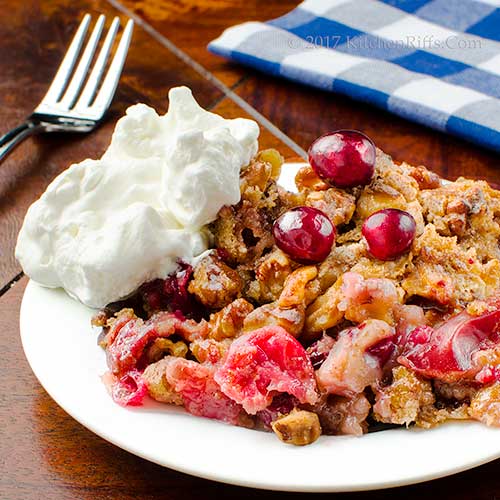 Far from the Tree

“So we did Spiced Hot Apple Cider with Rum last week, and now this week we’re doing Cranberry-Apple Crisp with Nut Crumble,” said Mrs. Kitchen Riffs. “Maybe we should change our name to The Blog Apple.”

“Well, you can’t have too many apples this time of year,” I said. “And the cranberries add a nice touch.”

“Notice I included an orange in the recipe?” said Mrs K R. “Proving that you can in fact mix apples and oranges.”

“Of course,” I said. “I’m hoping that flattery will get me another helping of this crisp.”