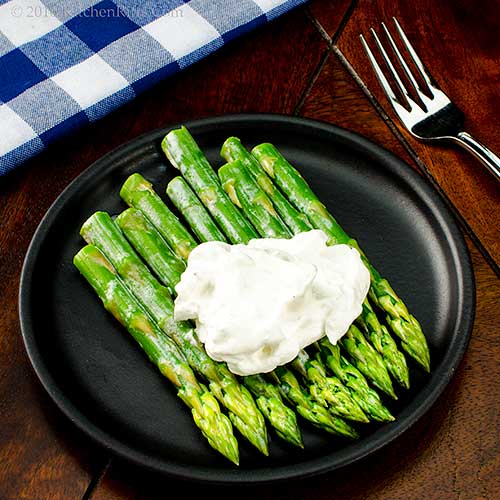 Surprise your taste buds with a recipe from Alice B. Toklas

Whipped cream tends to stay offstage until dessert time, when the sweets come out. But why? We know that cream partners well with salt and pepper. And many savory foods depend on it (think creamy mashed potatoes or luscious quiche).

Asparagus is elegant by nature, of course. But whipped cream brings out its playful side. 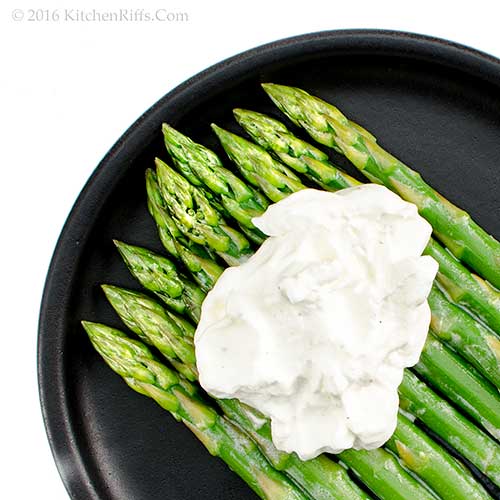 We found this recipe in Bert Greene’s Green on Greens. He, in turn, found it in The Alice B. Toklas Cook Book.

Toklas recreated this dish after tasting it at Madame Loubet’s small restaurant in Grignan, a town in southeastern France. It was served as a separate course in a four-course meal that Toklas shared with her partner, Gertrude Stein, and some friends. Did Madame Loubet create this recipe on her own, or did she learn it from someone else? Who knows!

You can use any style of cooked asparagus for this dish. We blanch ours in simmering water ahead of time, then reheat it right before serving. But you could also steam or roast it.

Prep and cooking time for this recipe is 10 to 15 minutes. This recipe yields 4 servings. You won’t have any leftovers, trust us. 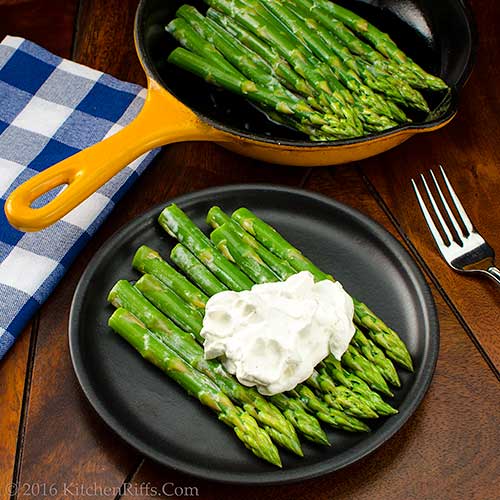 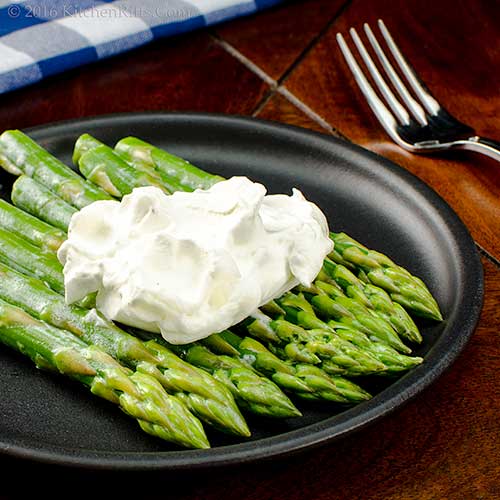 “Are you going full Gertrude Stein today?” I said.

“Could be,” said Mrs K R. “This Alice B. Toklas recipe has inspired me to whip out some bon mots.”

“But it hasn’t cured you of punning,” I said. “Maybe Alice should crack the whip.”

“Worry not,” said Mrs K R. “With this dish as muse, my puns will be cream of the crop.”

“Just like this asparagus,” I said. “And to think I whipped up this charmer in a trice.”

“You seem to be whipping it away just as quickly,” said Mrs K R. “Your plate looks scrupulously clean.”

You may also enjoy reading about:
Roast Asparagus
Pineapple, Coconut, and Carrot Salad
Asparagus and Spinach Salad
Edamame and Bean Salad
Kale and Cabbage Gratin
Gratin Dauphinois
Celery Root and Potato Gratin
Or check out the index for more recipes
Posted by Kitchen Riffs at 9:01 AM