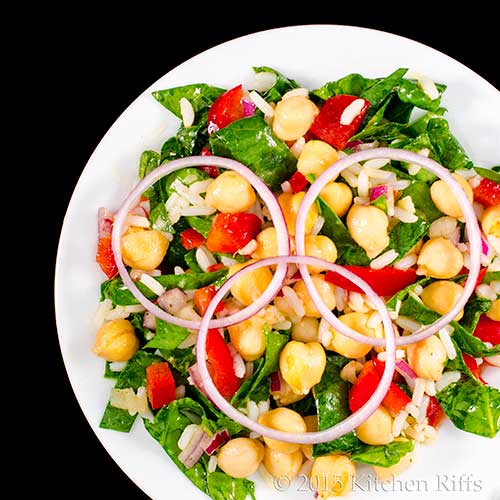 Spring has arrived here in St Louis. Well, sort of. Daffodils are popping up, but we’re still having some raw days.

Which makes this the perfect time for hearty salads—the kind that use beans or other legumes. They’re protein-rich, so a generous serving makes a meatless main course. But they’re not so heavy that you couldn’t use a smaller serving as a starter, or even as a side dish. 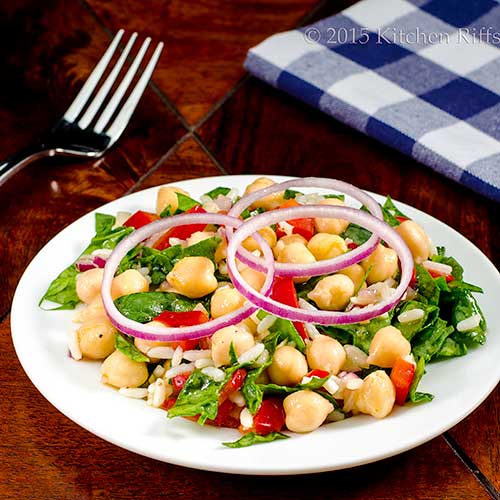 This salad is easy to adapt to your whims—and to the contents of your pantry. Don’t have chickpeas on hand? Then try substituting white beans. Don’t feel like rice? A small pasta shape like orzo would be a good stand-in. Or you could use another grain—barley, for example, would be interesting. Out of red bell pepper? You could use tomatoes instead (if you can find decent ones).

Maybe you’d like a salad that’s heavier on greens? Just double (or even triple) the spinach quantity. Prefer just a hint of greens? Then halve the amount of spinach, or replace it with half a cup or so of chopped parsley.

Active prep time for this dish is only about 20 minutes. But the taste benefits when you marinate some of the ingredients in the refrigerator for at least 3 hours (see Step 6). So plan on beginning this salad 3 to 4 hours before you want to serve it.

This recipe yields about 4 main-course servings or 8 starter servings. Leftovers keep for a day or two in the refrigerator if stored in an airtight container (although the flavor diminishes somewhat). 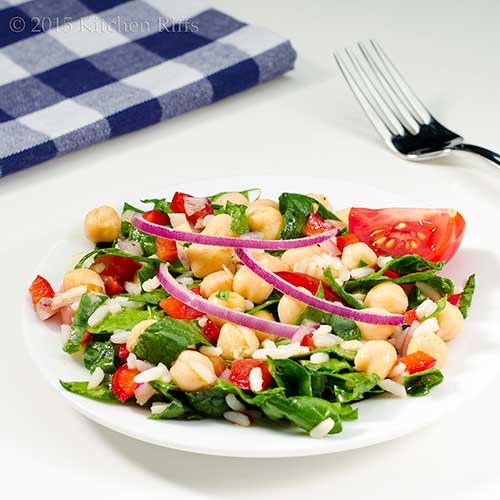 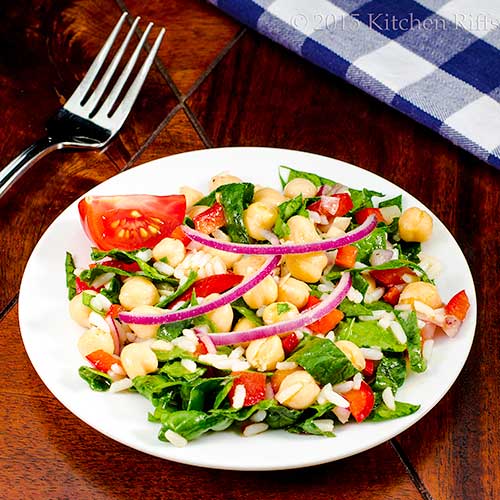 “Yep, we can put in some cold-tolerant veggies soon, like spinach, Swiss chard, kale, lettuce,” I said. “Though we’ll have to wait a bit on the cucumbers and tomatoes.”

“Speaking of which,” said Mrs K R, “do you think the squirrels will be harvesting most of our tomato crop again this year, before we get the opportunity?”

“Those squirrels!” I said clenching my fist. “Every year they get 80% of the tomatoes. They sneak in right before we’re ready to pick them.”

“And often take just a bite or two out of each tomato,” sighed Mrs K R. “Leaving the rest to rot on the garden bed.”

“They’re fiendishly clever,” I said. “They chewed right through that heavy netting we used last year. I think we’re dealing with a mutant strain of squirrels here. Maybe ROUSs.”

“Rodents of Unusual Size?” asked Mrs K R. “Like in The Princess Bride?”

“No, I mean Rodents of Unusual Skill,” I said. “These squirrels are diabolical!”

“Hate to break it to you,” said Mrs K R. “But I don’t think there’s anything particularly special about our squirrels. They’re just doing what squirrels do—which is chew things.”

“Wait,” I said, “if these squirrels aren’t unusually clever, what does that make me?”

She cleared her throat. “And the year before that.”