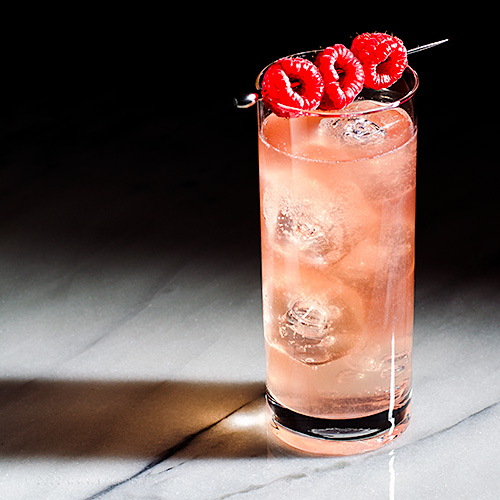 Sometimes spelled Florodora, this refreshing smooth sipper was named after an 1899 musical comedy

Florodora (the musical) features disguises, intrigue, and complicated silliness. But don’t worry. With this cocktail, you’ll never lose the plot. It’s a delightful combo of gin, raspberry liqueur, lime juice, and ginger beer. Which makes it a nice slow sipper with perky flavor.

And that’s no song and dance. 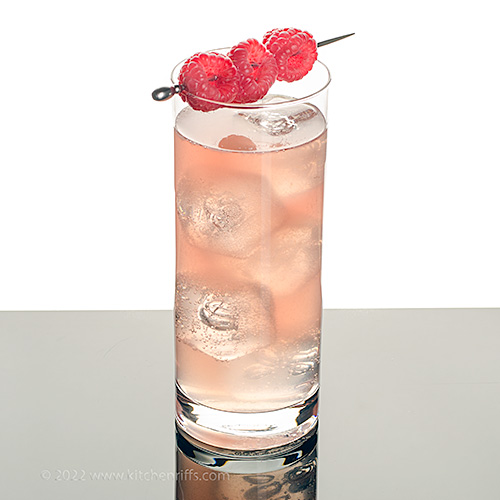 The musical comedy Florodora opened in London in 1899, where it became very popular. A year later, it opened on Broadway in New York City, becoming even more popular. It also started a successful run in Australia around the same time. More history in the Notes.

Now let’s talk about the drink. It’s basically a gin and raspberry liqueur version of a Dark and Stormy Cocktail. The flavor is terrific, and it’s become one of our favorite warm-weather drinks. 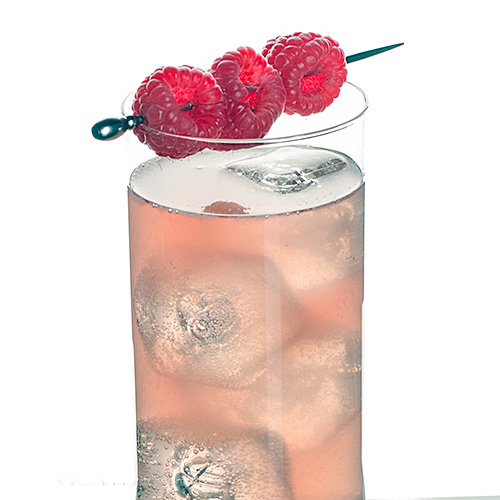 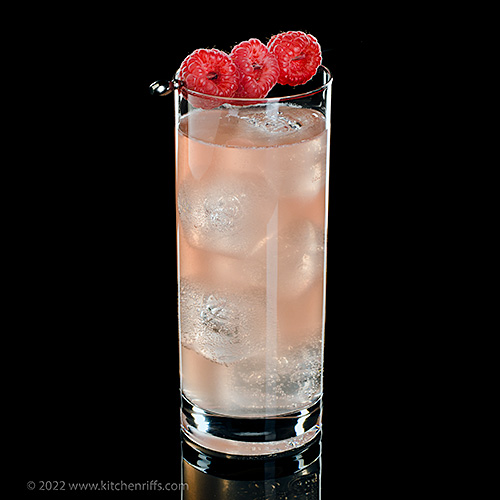 “Nice floral fragrance to this one,” I said. “Glad you find it iris-istible.”

“Well, I was going to offer a peony for your thoughts,” I said. “But I don’t want to violet your privacy.”

Better stop before this gets thorny.

LOL...always enjoy the flirty conversations between you and Mrs. The gorgeous cocktail is totally new to me. Great to learn something new again!

Hi Angie, this cocktail doesn't seem to be very popular these days. Too bad -- it's excellent. Thanks for the comment.

This is my kind of cocktail John. I have been telling bartenders about your website and one of them has made one of your cocktails for me. Prost !

Somewhere I have heard of the Floradora Girls, but never knew who they were or where they came from. Evidently they were known as Flora, Cora, Nora, and Dora, though there were six of them. Go figure. At least that explains why the spelling changed.

Looks like a nice drink. I actually drank some mixed drinks when onboard a ship this month, though now I'm back to my usual wine drinking habits.

Hi Gerlinde, Prost! And appreciate you spreading the good word. :-) Thanks for the comment.

Hi Mae, I had heard of the girls, I think, but vaguely. And didn't really know here was a cocktail until a couple or so years ago. It's really a good one -- worth ordering next time you're on a cruise ship. :-) Thanks for the comment.

Hi Pam, really refreshing. Very tasty. One of our new favorites! Thanks for the comment.

This is such a clever cocktail and how lovely that it was created in respect to the Floradora show. A great combination of flavours, it could have been called Flavadora. Thanks for the story and cocktail inspiration. Warm regards, Merryn

Sounds like a perfect cocktail for Labor Day weekend! Love the color!!!

Hi Liz, isnt the color wonderful? Flavor is, too. :-) Thanks for the comment.

Haha we both have shared a coctail with gin and raspberry liquor this week.

This is such a beautiful, fresh, and delightful drink. I never thought of adding ginger beer, and I love this twist!

Hi Ben, great minds! :-) And the gin/ginger beer combo totally works! Thanks for the comment.

Hi Eva, we love writing those endings! :-) Thanks for the comment.

Too cute, the conversation. Love gin, love this cocktail.

This sounds very refreshing and with a couple of slight modifications, it could even be an occasional Keto beverage.

Hi Anne, this is SO good -- really worth trying. :-) Thanks for the comment.

Totally agree with Mrs KR. Terrific flavor, outstanding color, just by the looks of it, its irressitable

Hi Raymund, we certainly can't resist this! :-) Thanks for the comment.

i love Chambord - well, i used to back in the days when i drank (about a year ago). this sounds very delightful and i love the name. P.S. I am no longer getting any emails about your posts, and i can't subscribe here. what to do? :)

The flavors in this sound wonderful with the herbal, tart, and even spicy notes. I'll take two :)

Hi Laura, two is an excellent number. :-) Thanks for the comment.

Great recipe!I have all the ingredients except for Chambord liqueur. May have to make raspberry syrup.

Hi Balvinder, pretty easy to make raspberry syrup. :-) Thanks for the comment.

Now, that's a looker! And I can never resist anything with ginger beer as a component.

Hi Carolyn, it's pretty, isn't it? And wonderful flavor! Thanks for the comment.

So pretty. Looks good too.

Amazing photography as always. I'm always intrigued by the backstories of the cocktails you present. I can imagine having one of these at the Waldorf after enjoying the play.

Hi R, doesn't this look great? A wonderful drink! Thanks for the comment.

Hi Ron, isn't this a fun drink? We love the backstory on this one! :-) Thanks for the comment.

John, the color on the drink is stunning!! It just looks refreshing. I always love the backstories about these oldies, but goodies. I have to try this one, I'm picking up some gin and ginger beer this week! I have sugar-free rasberry flavored syrup in my pantry, will that work? Love y'alls conversations over the recipes 😁Don't make her get the weedwacker lol Excited to try it, thanks so much!

Hi Marcelle, I would think the sugar-free raspberry syrup would work. Might use a bit less of it at first (sugar-free stuff is often really sweet!), and adjust the quantity to taste. This has become one of our favorite drinks -- we had it again this weekend. :-) Thanks for the comment.

I enjoyed reading the history of this festive and delicious looking drink! Your photos certainly make it extremely appealing! Yum.

Flower puns are hilarious. This drink is intriguing because I like ginger beer and it's good to know some less trodden applications for it. Hmmm. That didn't quite work... I was going for a trampled flower garden joke but “I’m afraid it’s wilted.” GREG

Hi Greg, wilted, but not bad. :-) This is really good -- worth trying. Thanks for the comment.

I really like ginger beer, and what a great ingredient mixed in to the other in this beautiful cocktail. Your photos of drinks always lure me in. The first one in this post is so dramatic. I love it! :-) ~Valentina

Now doesn't this sound refreshing! And I love the name.. :-)

Hi Frank, this is really good -- you wont' be sorry if you try this. :-) Thanks for the comment.

Wow I have all of these ingredients. Including fresh raspberries until the first frost!

Hi Inger, this is a wonderful drink -- maybe the best one we did this summer. :-) Thanks for the comment.