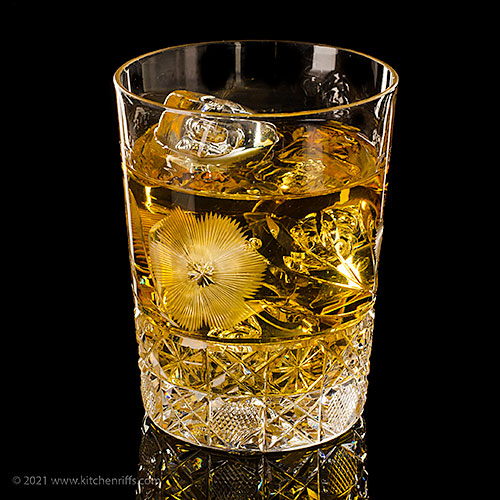 The Rusty Nail Cocktail was a big hit in the mid-20th century. Not so much in the 21st.

That’s too bad, because the drink has lively, pleasant flavor – and color perfectly suited to autumn. It’s somewhat sweet, which makes it an ideal after-dinner drink. But not so sweet that you wouldn’t want to sip it before the prandial phase.

Or while cooking that Thanksgiving turkey. 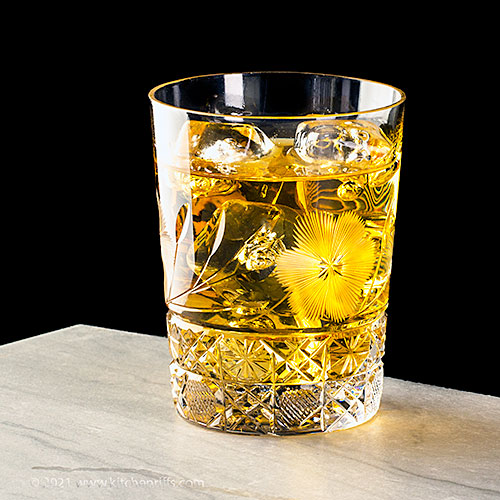 The Rusty Nail is a mixture of blended Scotch whisky and Drambuie. Drambuie is a sweet Scotch-based liqueur flavored with heather honey, herbs, and spices (see Notes for more info).

You “build” this drink in a glass rather than stir or shake it. So it’s an easy drink to make. 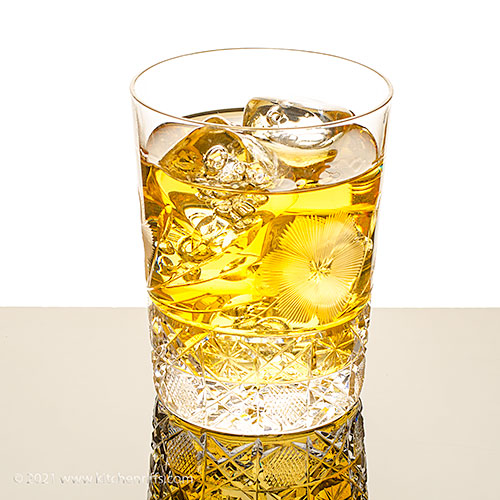 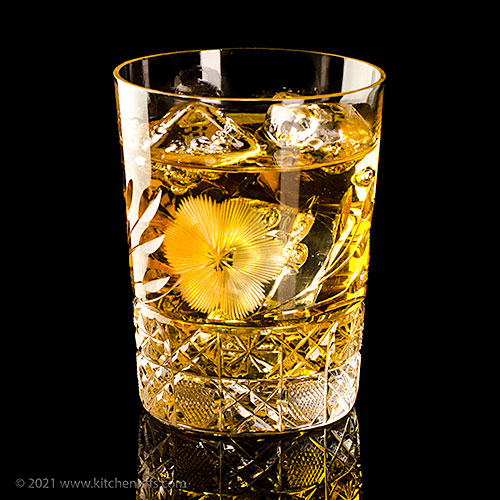 “Indeed,” I said. “Return with us now to 1688 and the heady days of the Glorious Revolution, when England turfed out King James II (of the House of Stuart), replacing him with his more pliable daughter Mary and her husband, a Dutch prince named William.”

“Right,” said Mrs K R. “William and Mary were happy with their new estate (England being less prone to flooding than The Netherlands). But the Stuarts were highly annoyed and schemed to reclaim the throne.”

“Yup, and in 1745, James II’s grandson, Charles Edward Stuart (aka Bonnie Prince Charlie) decided to invade England,” I said. “Even though it was a lot colder than Rome, where he had been born and raised in exile. No accounting for taste.”

“He needed help though, since most of his experience up to that point involved taking part in family whinging about the lost throne,” said Mrs K R. “So he turned to the Scots, many of whom still supported the Stuart cause.”

“Despite their assistance, Bonnie Prince Charlie came a cropper at the Battle of Culloden in 1746,” I said. “He was so clueless that he fought on open ground with no cover. The British forces probably couldn’t believe their luck.”

“So the bonnie prince yelled ‘run away, run away,’ which was wise under the circumstances,” said Mrs K R. “He fled to the Isle of Skye, disguised as a lady’s maid. Which must have been a torment to him, since he had to wear a long skirt instead of a short kilt, and thus couldn’t show off his shapely calves.”

“And on the Isle of Skye the prince enjoyed the hospitality of Clan MacKinnon,” I said. “Such a coincidence – MacKinnon being the name of the family that eventually bought the Drambuie recipe and recounted the stirring legend surrounding it. Funny how that works.”

“Wondrous, no?” said Mrs K R. “And while on the Isle of Skye, the prince gave John MacKinnon the recipe for his favorite tipple, which turned out to be Drambuie. Though it didn’t have a name then, for some reason. And the recipe remained unknown to the world for more than 100 years thereafter, despite its delicious taste and heroic provenance.”

“Then in the late 19th century, the MacKinnon clan, being extremely generous, gave the recipe to John Ross, no payment required,” I said. “His son, James Ross, started tinkering with the formula – which for some reason originally had a brandy base.”

“I guess the bonnie prince was confused about Scotland’s national drink,” said Mrs K R. “Having grown up on the Continent and all. In any case, James Ross changed the liqueur’s base to Scotch and gave it the name Drambuie.”

“But alas, the family Ross fell on hard times and had to sell the recipe,” I said. “And who did they sell it to? A family by the name of MacKinnon – who went on to market it around the world. Amazing!”

We’re sure you’ll agree that this all sounds totally legit, right? So let’s raise a glass to Bonnie Prince Charlie – and the marketing creativity of Clan MacKinnon.

wow Those shots are just gorgeous! I almost forgot about this cocktail.

Hi Angie, easy to forget about this cocktail -- it's been ages since we've had one. Worth trying again -- it's good. :-) Thanks for the comment.

I love the tongue-in-cheek history lesson, John. I'm sure you two are an entertaining couple at parties. Also, the drink sounds like one that deserves renewed popularity. Thanks!

Hi Terry, we do have our moments. :-) Mrs KR actually wrote virtually all of this ending (we write these posts together). Thanks for the comment.

Great post, I love all the history and story behind it.

Hi Pat and Dahn, we got interested in cocktails because of their history. And stayed for the flavor. :-) Thanks for the comment.

A chain of liquor and wine stores called Total Wine just opened a couple miles from us. They say they have 6000 bottles and will go up to 8000. When we finish sampling the wines, we’ll surely move on to the Scotch whiskeys, and then can make this fine concoction.

I am a scotch lover anyway, so what is not to love about a Rusty Nail?

Hi Mae, Total Wine is kinda fun, although several of our local stores have more interesting selections (not more; just more interesting). It'll take you a couple of years to work through 6000 bottles before you can move on to Scotch. :-) Thanks for the comment.

Hi Anne, you'll love this! :-) Thanks for the comment.

For mixes I would prefer blended Scotch too, the single malt ones are good just on the rocks

My dad never liked Scotch until they spent a year in Scotland! I wish he was still around and I could make this for him (my mom would love it, too!).

Hi Raymund, single malt is really nice, but a waste, we think. And there are some really nice blends out there! :-) Thanks for the comment.

Hi Liz, I liked Scotch a lot when I was in younger, then got out of the habit of drinking it. Been playing with it for the last few years -- it's now my favorite whiskey (although rye gives it a run for its money). Thanks for the comment.

That is a gorgeous color and perfect for the fall. I love the idea of a little sweetness to the Scotch by adding the Drambuie. Nice cocktail John.

Hi MJ, we normally aren't big fans of sweet cocktails, but this one works. Although the way we make it, I guess it's not all THAT sweet! :-) Thanks for the comment.

*smile* Rarely indulge in cocktails as you may have gathered but have enjoyed more than a few of these . . . never think of it as a 'cocktail' and Drambuie is about the only liqueur I'll touch !!! To me it is a very acceptable post-prandial libation. . . and I dare say I also would reach for a cheaper blend . . . here's to Bonnie Prince Charlie . . .

Hi Eha, we hadn't had Drambuie for quite some time until we bought a bottle to make this drink. It's good stuff! As is this drink. :-) Thanks for the comment.

I'd love to sip on this while cooking the turkey, and everything else for Thanksgiving. Festive, delicious, warming and beautiful! :-) ~Valentina

I've never had a Rusty Nail that I can remember, but I enjoy a good Scotch Whisky on the rocks. This looks like the perfect drink to revive. Love a drink with a great story like this one..

Hi Valentina, it's such a nice drink. :-) Thanks for the comment.

My husband would love this! I'm surprised I've never heard of this drink before

Now that is a cocktail I haven't had in years, I might give one a try again soon.

Hi Ashley, now that you've heard of this, you need to sample one! :-) Thanks for the comment.

Hi Karen, you know you want to try one of these again. :-) Thanks for the comment.

Yes marketing added to the romantic allure of this cocktail. But it has allure nonetheless. GREG

Love the drink and the story behind it. But truth be told, I love that vintage cocktail glass even more! ;)

John, as always a great and fun post. But,this one was special for two reasons. First, because my dad use to enjoy a Rusty Nail every evening when I was young. Indeed, it was the first cocktail I learned to make. But, I've not have one in many years, a situation I must remedy.
Second, by coincidence we just watch (Netflix) a few night ago David Niven in the 1948 production of Bonnie Prince Charlie. Such fun..

This is a warmer upper on a chilly fall evening. Have done both plain on ice but have never thought to mix the two together. Must give that a go this weekend. Beautiful click too!

Funny, I've heard for the Rusty Nail but never knew how to make it. Until now, that is... Will definitely give it a try. And with blended scotch. I love single malts and have a decent collection, in fact. But I totally agree it would be overkill for a cocktail.

Hi Ron, haven't seen Niven in that -- sounds like something I need to. :-) And you need to make of these again! Enjoy. :-) Thanks for the comment.

Hi Bobbi, Scotch and Drambuie of course are wonderful served all by their lonesomes, but they're better together. :-) Thanks for the comment.

Hi Frank, we love single malt Scotch, but blends definitely have their place. In this drink, for example. :-) Thanks for the comment.

I've never even heard of The Rusty Nail Cocktail, but it sounds delightful. There's something lovely in the combination of whiskey and honey notes. Beautiful glass, too!

Hi Ben, definitely a drink worth checking out. :-) Thanks for the comment.

These photos are terrific and I love these glasses.

Hi Amy, thanks so much for that very kind comment!

As I mentioned on Facebook (or was it Instagram?), I fell in love with Drambuie when I was in college. It’s on my list to purchase this weekend, and I look forward to a rusty nail as we get closer to Thanksgiving. Thanks for the recipe, John.

Hi David, we hadn't had one of these in a long time -- fun to rediscover it. :-) Thanks for the comment.

I saw this beauty on FB or Instagram and was quite taken aback by that beautiful glass, very classy indeed. Thank you for the history lesson.
Eva http://kitcheninspirations.wordpress.com/

Hi Izaa, tastes good, too. :-) Thanks for the comment.

Not a scotch drinker but so pretty I could just look at this!

Hi Inger, the nice thing about drinks is even if you don't want one, they really are nice to look at! Thanks for the comment.